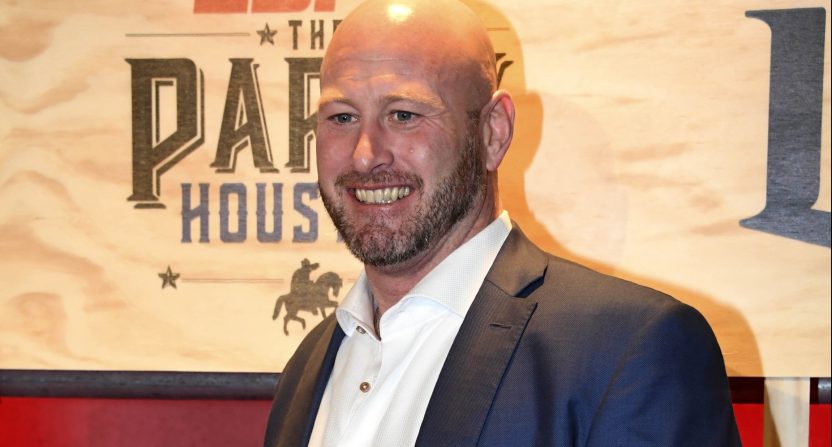 Trent Dilfer has kept somewhat of a low profile since he was laid off by ESPN back in 2017. Headlines about Dilfer since have included him bashing anonymous sources (after previously using anonymous sources to slam Colin Kaepernick), joining Sport Science’s John Brenkus for a series of segments that aired on NFL Network, and taking a job as the head coach of Tennessee’s Lipscomb Academy.

Prior to his layoff, Dilfer reportedly sparred with ESPN NFL producer Seth Markman about his future with the company before eventually returning after he couldn’t get the offer he expected from Fox Sports. Interestingly enough, Markman went to bat for Dilfer during the 2016 NFL season (after that reported confrontation) following his comments about Kaepernick, and bridges appeared to be mended.

Years later, some details about that conversation between Markman and Dilfer have come to light, from (of all places) Dan Le Batard.

According to Le Batard, Dilfer may have overplayed his hand when he was negotiating his contract. At around 25 minutes into Tuesday’s “Local Hour” edition of The Dan Le Batard Show with Stugotz, Le Batard was talking to executive producer Mike Ryan Ruiz revealed that Dilfer wanted a private plane because Kirk Herbstreit had one.

Le Batard: Herbstreit also has like a private jet, right? Isn’t he like the only one at the company who’s allowed to?

Ruiz: That detail I don’t know, but obviously you’re going to need some private travel to get you from like North Dakota whenever they take College GameDay on the road, and either the game that they’re at is not a game that ESPN has the rights to or they’re doing a different game.

So yeah, he’s going to have to get flown privately from some of these locations.

Le Batard: You want to hear a good ESPN story that I know to be true involving private flying? Because no one is allowed to fly privately, no matter how high up you are at the company.

Ruiz: Yeah, unless you’re traveling for a game broadcast.

There was a certain employee who overplayed his hand in negotiations with ESPN because he was very powerful and he was getting a lot of acclaim. And keep in mind, all across ESPN, people disappear from day-to-day and you forget that they were ever there. Like no there’s no announcement, next thing you know Eric Mangini’s just on Fox three years later.

Apparently, Dilfer went to the George Costanza School of Negotiation, tried to get the Ted Danson plane, and it didn’t work out.

Le Batard might be a little off on his timeline because Dilfer wasn’t immediately let go, but it would make sense that a negotiation tactic like this could hurt Dilfer’s stock at ESPN. This is especially true, given that the expected Fox offer never materialized and Dilfer had been backed into a corner.

If this story is true, Dilfer not only misjudged his position at ESPN, he also misjudged why Herbstreit needs to travel in a private plane in the first place. Herbstreit sometimes needs to be in two places anywhere in the country on the same day, and flying private is a necessity because ESPN cannot afford for Herbstreit to be delayed while flying commercial, potentially missing his primetime broadcast. Logistically, that’s the way to do it, and if ESPN can afford that, that’s what they’ll do.

Let that be a lesson to anyone else negotiating a deal with ESPN: unless the company needs you in two places across the country on the same day, don’t try to negotiate for a private plane.