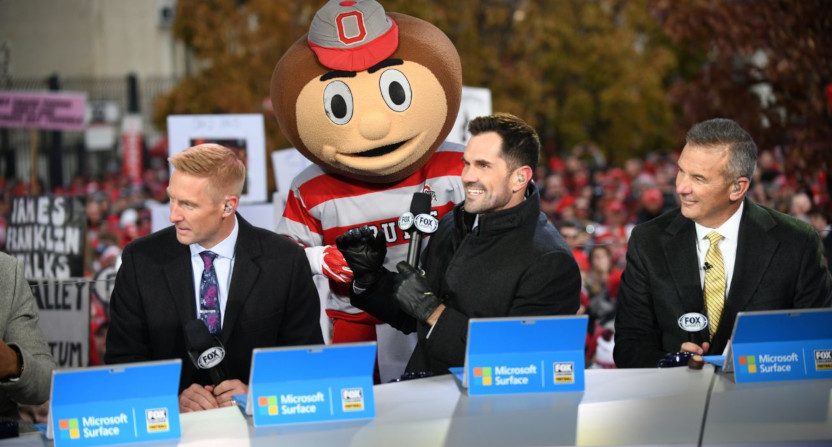 A significant college football subplot this year has been Fox’s attempt to compete with ESPN’s College GameDay in the pregame show space by making some significant tweaks to their previous offering. Those include naming the show Big Noon Kickoff, putting stronger matchups in their noon ET window immediately after the game (and spending a lot of the show promoting the upcoming noon ET matchup rather than the full day’s slate of college football), adding Urban Meyer and Reggie Bush, and even taking the show on the road at times, including to Columbus last week for Penn State-Ohio State and to Ann Arbor this week for Ohio State-Michigan. Last week’s road show certainly paid off with season-best ratings that, in the final hour, got close to GameDay‘s overall rating, and this week’s might do even better.

Last week’s matchup was particularly notable considering that GameDay was in Columbus as well (and so was BTN Tailgate, but its audience is outside the top 150 cable programs from that day). And those ratings wound up being quite interesting. As per an ESPN release, GameDay averaged 2,125,000 viewers across the entirety of its three-hour (9 a.m. Eastern-noon ET) show ( with a P2+ audience of 2,035,000 viewers as per Showbuzz Daily; the discrepancy may be about overnights versus finals). It also averaged 2,725,000 viewers for the final hour. As per a Fox release, Big Noon Kickoff averaged 1,979,000 during the 11:00 a.m-noon ET hour; that show was two hours long this week, though, and they didn’t release numbers for the whole thing.

We don’t know exactly what Fox drew for the 10-11 a.m. hour, as they didn’t release that number. However, ESPN did claim that GameDay “achiev[ed] a 52% higher audience for its three hour show compared to the broadcast network’s two hour show.” Given that we know the total ESPN viewership of 2,125,000 and we know the Fox Hour 2 viewership of 1,979,000, algebra suggests Fox averaged 1,390,826 viewers for their whole show and thus averaged 817,052 viewers for their first hour. That’s all based on that ESPN claim, though.

Those numbers come with a lot of context and disclaimers, which we’ll get to, and they’ve led to big claims on both sides. Fox is understandably quite happy with how Big Noon Kickoff is doing (they say it’s averaging 1,080,000 viewers for the season, up 34 percent from last year’s pre-game show), and they’re bumping up any number they can that looks close to GameDay, which specifically is that last-hour number in this case. Meanwhile, ESPN is playing up that their GameDay audience is up overall despite competition, saying that they hit an average audience of over two million for three straight weeks for the first time since their 2013 expansion to three hours and that they’re up year-over-year (with this week’s episode up 10 percent year over year for the whole show and 14 percent for the final hour). All of those comments are correct, but they come with some context that’s worth discussing.

It’s worth keeping in mind that broadcast Fox is available to approximately 38 million more homes than cable ESPN (as determined by subtracting ESPN’s current estimated 83 million subscribers from the 120.9 million U.S. TV homes Nielsen estimates for the 2019-20 TV season), giving any programming they offer a significant edge in terms of potential viewers. That makes it even more impressive when a cable show beats a broadcast one, and GameDay did beat Big Noon Kickoff, both in overall audience and in peak audience.

It’s also worth noting that GameDay‘s three-hour duration drags its average audience down relative to Big Noon Kickoff‘s. GameDay is always three hours, and those 9 a.m. and 10 a.m. ET hours are a particularly tough sell for many West Coast viewers (given that it’s 6 or 7 a.m. there). Big Noon Kickoff has generally been one hour, 11 a.m. to noon Eastern, which is a better time nationwide (it’s also when the GameDay audience tends to peak). And even an expansion to two hours shouldn’t drag you down as much as the first hour of a three-hour show does. So Big Noon Kickoff has a significant time advantage relative to GameDay.

Big Noon Kickoff also has a notable matchup edge from it leading directly into the game Fox is trying to emphasize; it gets a last-hour bump from people who don’t care about pre-game much but will turn on the channel with their game early. And that’s further enhanced by the amount of focus this show puts on that particular game (rather than the overall college football landscape, which GameDay tends to cover more). This very much can feel like a specific pre-game show at times, and when that’s a particularly big game (like Penn State-Ohio State), that can help it out.

With all of that said, though, while ESPN is still winning this matchup for the time being and doing so despite a wealth of structural disadvantages, it’s impressive how close Fox has managed to make the matchup. That’s especially true when you consider the long history of GameDay and the extremely limited competition Fox has been able to post against it in the past. And while that led to some skepticism around Fox’s “new pregame show” when word of their plans first came out in March (via Andrew Marchand of The New York Post),  they’ve certainly done better than many expected to date.

Also, it’s not all structural advantages. Although those edges matter, past pregame shows on Fox haven’t worked out despite the broadcast network audience, so you still need to offer a reason for people to tune into your content. Big Noon Kickoff has found some ways to differentiate itself, especially with its focus on the Big Ten (where Fox holds the primary rights) and to a lesser degree on the Big 12 and Pac-12 (where they also hold rights), and with focuses on Xs and Os matchups in a way the competition doesn’t always do. Whether you like what they’re doing or prefer the GameDay approach, they’re certainly making things interesting in an arena where few figured Fox would ever pose much of a challenge to ESPN.

Moreover, that audience race between Big Noon Kickoff and GameDay could get even closer this coming week. The Fox crew will be broadcasting live from Ann Arbor directly ahead of a highly-anticipated Ohio State-Michigan game (a matchup which tends to post ratings records, and one Fox was very eager to get when they paid a premium for first pick of Big Ten games). Meanwhile, GameDay is headed to Minneapolis, but their broadcast doesn’t directly lead into Wisconsin-Minnesota (a 3:30 p.m. ET kick); instead, the ESPN game is Clemson-South Carolina, while the ABC game is Georgia-Georgia Tech. So Fox will certainly get more of a bump from people flipping TVs on ahead of the game.

And sending the broadcast on the road (which, remember, was a key part in what helped get College GameDay going itself; the 1993 decision they made to do that is seen as a turning point for the show by many, despite the show itself beginning in 1987) to Ohio State-Michigan feels smart. A lot of the college football world will be looking at Ohio State (which just rose to #1 again in the CFP rankings released Tuesday night), especially with Michigan’s currently ranked #13. And that’s certainly the strongest noon game, as both South Carolina and Georgia Tech are unranked.

Also, with GameDay opting for Wisconsin-Minnesota instead (which has some merit on their end; they get to cross off another school they’ve never been to at a time when it makes sense, further illustrating their focus on covering the wider sport, and they’re not just following Fox around and promoting games Fox has rights to), Big Noon Kickoff has a further argument still as “the show you watch before Ohio State-Michigan.” We’ll see what that does with the ratings, but it certainly can’t hurt.

The prediction here is that the Big Noon Kickoff ratings get even closer still to GameDay at the least, especially when considering peak Big Noon Kickoff (final hour) against overall GameDay. That’s not an even matchup structurally, and it doesn’t necessarily mean all that much for one hour of a Fox show to beat three hours of an ESPN show, but it’s a matchup that wound up being close last week even when the overall one wasn’t. And with the various advantages for Fox this coming week, it’s possible that they could even post a win in that particular comparison. That wouldn’t put them ahead of GameDay overall (overall audiences or even audiences while both are on the air would be fairer comparisons, and GameDay seems likely to still win both), but it would further indicate that Fox has made this an actual back and forth.