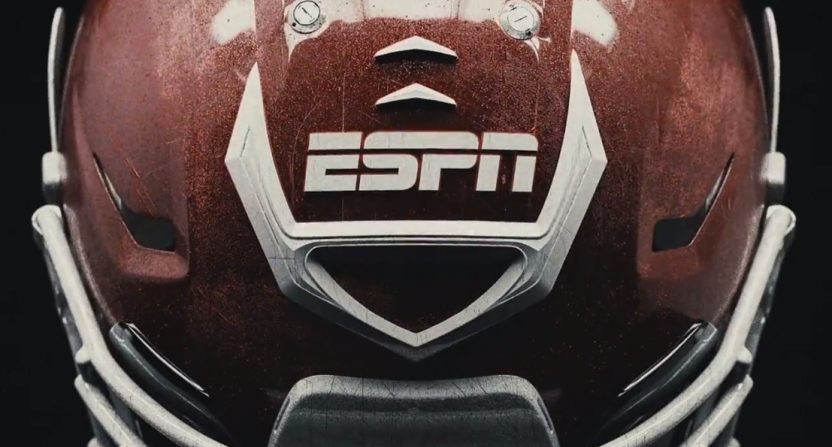 On Monday, ESPN rolled out their roster of college football broadcast booths for the 2020 season. While there isn’t a whole lot of change throughout the lineup, there are still some significant changes, largely thanks to promotions and broadcasters changing networks.

The primary Saturday Night Football crew will continue to be Chris Fowler, Kirk Herbstreit, and Maria Taylor, to the surprise of no one. ESPN’s main Saturday night game will be called by Sean McDonough, Todd Blackledge, and Todd McShay. McShay is a new addition to the crew, having worked with Steve Levy and Brian Griese last year. That duo is now calling Monday Night Football, along with Louis Riddick.

Speaking of MNF, former play by play broadcaster Joe Tessitore returns to the college ranks this year, and will work with Greg McElroy and Holly Rowe. McElroy worked with Dave Pasch and Tom Luginbill last year, while Rowe was the reporter for McDonough and Blackledge’s crew. Pasch will work with Mike Golic this season, while Luginbill’s partner in 2020 will be Anish Shroff on ESPN and ESPN2 games. The Tessitore and Pasch crews will call ESPN and ABC Saturday games.

The final two crews for ESPN and ABC Saturday games are the returning teams of Mark Jones and Dusty Dvorcek and Bob Wischusen and Dan Orlovsky. Dave Flemming also gets a move up from Fridays to Saturdays on ESPN, and he’ll be working with Rod Gilmore. Jason Benetti, Gilmore’s partner last year, will work Friday nights with Andre Ware. Beth Mowins and Kirk Morrison will team up on ESPN and ESPN2 Saturday games, as will the returning pair of Roy Philpott and Kelly Stouffer.

Most of ESPN’s reporters won’t work with a dedicated team each week. Here’s the list, in alphabetical order.

Thursday night games this season will have a significant change, with Matt Barrie and Mike Golic Jr on the call. Last year, Thursday nights were called by Adam Amin, Matt Hasselbeck, and Pat McAfee. Amin has left for greener pastures at Fox Sports, while Hasselbeck and McAfee are curiously absent from the broadcast roster.

Also curiously absent from the roster is Ryan Leaf. Leaf joined ESPN last summer, and worked with Clay Matvick across the season. But in May, he was arrested on a domestic battery charge, and there hasn’t been much of an update since. But given the lack of games thanks to the Big Ten, Pac-12, and MAC postponing their seasons, and the Mountain West (a package of games called somewhat frequently by Leaf last year) TV package now being split between Fox and CBS Sports (though that conference also postponed their season), it’s not shocking to see some broadcasters fall by the wayside in 2020.

Finally, here’s a convenient screencap of the full slate of college football broadcasters for ESPN from the network’s release. 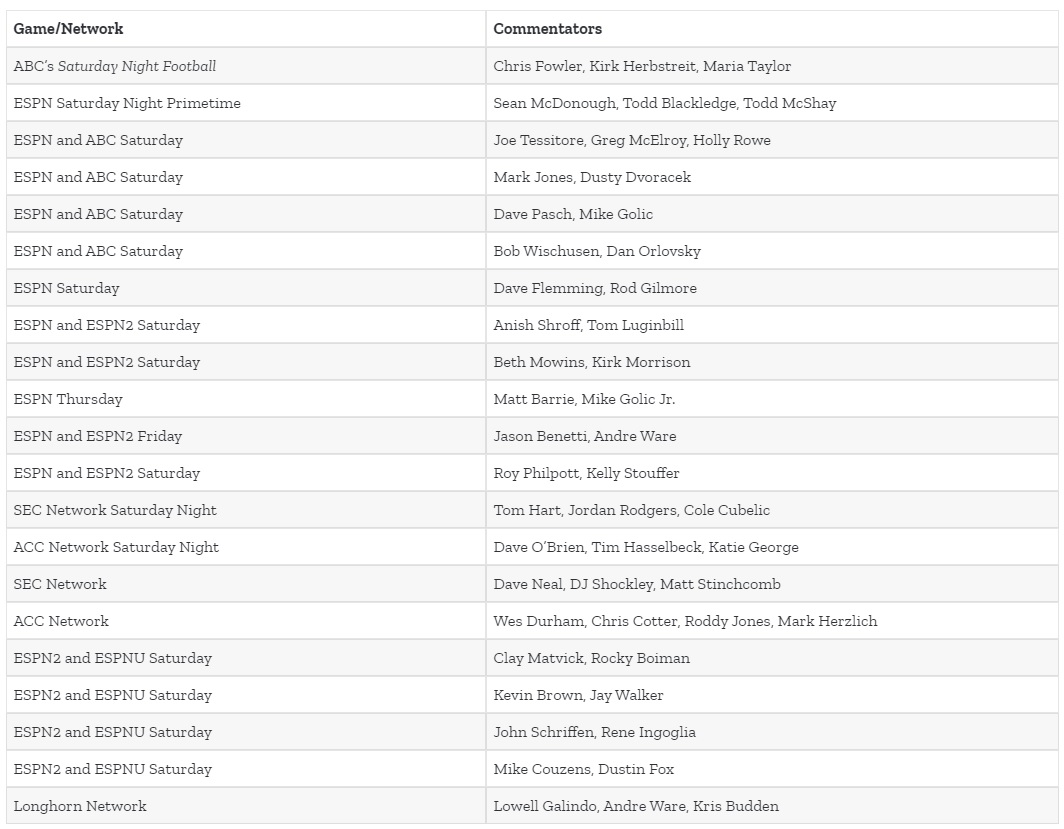 With game broadcasters and graphics both revealed for this college football season on ESPN, all we’re waiting for is details on the network’s studio coverage and what they’re going to do with College GameDay this fall. Then we can let the games begin.