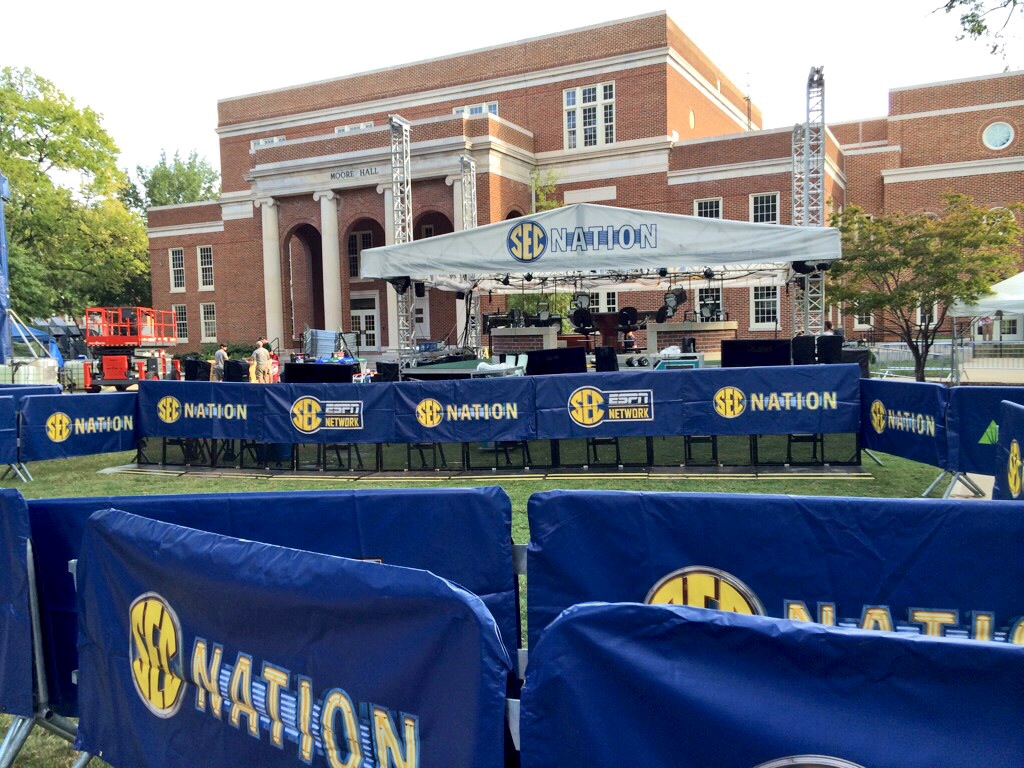 TUSCALOOSA, Ala. — The Southeastern Conference has become so ubiquitous in today’s sports culture, it’s almost naive to attach cliches to it. SEC football is a religion, a bragging right, a divine passion, and a historic tradition, and is currently at its zenith as far as media exposure with the launch of the ESPN-run SEC Network.

The ultimate SEC lovefest on the 24-hour SEC channel culminates with SEC Nation, the diet version of College Gameday that travels to a different Southern school and plops its set in front of a crowd on a Saturday morning. It’s allowed radio host Paul Finebaum to be seen on television more often, given regular, paid opportunities to former players Tim Tebow and Marcus Spears, reporter Kaylee Hartung, and expanded host Joe Tessitore’s job description.

The host has added an entire morning shift to his usual schedule of calling college football games, something he’s fine with.

“I wake up at six in the morning, somebody drives me over to a bunch of rowdy fans where we get up here for two hours and talk SEC football next to two living legends,” Tessitore said. “We have a blast, it’s a lot of fun. I jet off to another game, I do that. It’s incredible.

“If you’re complaining working from 6 a.m. to midnight doing what I do for a living on Saturdays, you’ve got real issues. On Saturday, I’m going to start my day here in Alabama, have fun with this, and I’m going to finish my day with Miami-Nebraska under the lights in Lincoln. I hate to use the hackney phrase of “dream job,” but that’s pretty much what I consider it.”

With the fragmentation of the media into more and more niche outlets, the SEC Network makes sense. Give the most rabid fanbase in the country a channel that only speaks their language and you’ll have a viable, marketable product. It’s been a successful experiment with most college conferences, but the SEC Network is a channel that actually gets carriage and will eventually attract viewers.

The purpose of SEC Nation is to give SEC fans an alternative to the tentpole of Gameday, something to turn on when the big tent has gone to a commercial or starts talking about things that don’t matter to them, like the ACC or the Big Ten. They set up in places on SEC campuses where Gameday doesn’t go – smaller, more historic places – to stake a claim to their own spots. For instance, SEC Nation was in front of Moore Hall on Alabama’s campus this weekend. No student I asked knew where Moore Hall was. I was eventually told, “Find the quad and look for the giant SEC Nation set.”

There’s a different feeling around town when College Gameday is in town. A game that is already presumably important by the network’s presence is made to feel that much more relevant. SEC Nation has a similar effect, something for which Tessitore credits Gameday.

“There’s good energy here,” Tessitore said. “I’ve been blessed to have those guys at Gameday be colleagues of mine for a long time. I’ve helped them out on that show here and there through the years, and it’s a very special show. That’s the most iconic and, to me, the best sports television show of the last 25 years.

“We wouldn’t exist without them. We’re just capturing a little bit of their energy here.”

Other than Finebaum, who sees the most airtime during the week and is arguably the face of the network, the biggest get for SEC Nation was Tebow, the former Florida Heisman Trophy winner and college football prom king who is still beloved by fans, Florida or otherwise. There were probably more Alabama fans who wanted selfies or autographs from the former quarterback than Florida fans. He’s an amiable, pleasant guy, who has taken to broadcasting, prepping for this show like he would any other football weekend.

“It’s really just like preparing for a game,” Tebow said. “Watching film, viewing it critically, analyzing the players and the schemes, what they should do, what they maybe could do. It’s fun too, I love it. It’s something that I would do regardless of it was my job or not.”

The SEC jingoism isn’t unbearable from SEC Nation, or the SEC Network in general. While the conference has six teams in the top 15 of the AP Poll, the favoritism on the network hasn’t rubbed audiences the wrong way. That’s what it’s for, though, some fans might want analysts to be more homeristic.

Tebow has played in the conference and won at its highest level, but he’s remained neutral on TV, which is something that has to be accepted in an analyst’s role.

Tebow picked Alabama to win against his Gators and talked about how he almost picked Alabama during his recruitment process, saying that selecting Florida over Alabama was the hardest decision of his life. He, Spears, Finebaum and Tessitore wore a houndstooth hat to commemorate Bear Bryant during the show. After predicting his alma mater would lose, Tebow got a few boos initially but walked off-stage to cheers and the clamoring for more photos and autographs, still a superstar in his element. He hints at returning to football in every interview he gives, but that’s probably because he keeps being asked.

“You know me, I’m always training and in shape and you never know what the future holds, but I’m so blessed to be able to do this,” Tebow said. “It’s something that I love doing and something that is a lot of fun for me and doesn’t feel like work.”

Tebow can do this job for a long time if he wants. He’s proved himself capable in these first four weeks as a full-time analyst, as has SEC Nation as a show. It’s a smaller version of Gameday in size only, with the content, talent and production value that, if given time, will eventually equal its fellow traveling counterpart.