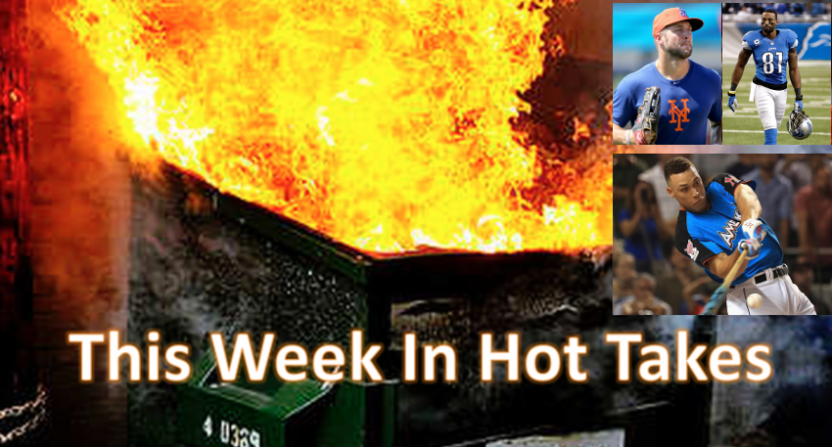 Welcome to another edition of This Week In Hot Takes! Here’s a look at the hottest takes from sports media members from July 7-13.

5. Phil Mushnick again complains about late starts: This has been a running theme for New York Post columnist Mushnick, who went after the NCAA’s late Women’s Final Four starts in April and has regularly complained about them in baseball as well. He took it to a new level this week, though, spending a substantial portion of his polemic “The only way to save TV baseball from its greed-induced coma” whining about late games:

For example, the Commissioner, the Guardian of the Game, should be the genuine goods as opposed to being a well-paid, nodding functionary serving the best short-term financial interests of team owners in pursuit of maximum TV money, no matter the cost to The Game.

He or she should operate with only one mandate, one goal: to do what’s best on behalf of the game, including the gone-with-the-wind best interests of fans, especially ticket buyers.

An example of an example: No matter how much money TV offers, no game is to be scheduled to begin after 7:10 p.m., home-team time.

And, as if MLB’s shot-callers can’t recall why, where and when they became baseball fans, it’s time to restore 1 p.m. Saturday games as a given, as opposed to selling TV the authority to turn day into night and abandon kids and their families.

Uh, there are still plenty of afternoon Saturday games, and many of them are shown on TV. And most of MLB’s games do still start around 7:10 home-team time. Mushnick’s main complaint appears to be with the likes of ESPN’s Sunday Night Baseball, which he’s bashed before, and which often starts at around 8 Eastern, but if you’re running one game for the whole country, don’t you want to do it in primetime?

NBC’s Sunday Night Football was the highest-rated show on TV for the sixth-straight year last season, so clearly its regular 8:30 p.m. Eastern starts killed it. Starting games at around 8 or 8:30 Eastern makes a lot of sense for maximizing a national audience, even if the end can come a little late in Eastern Time. As with many Mushnick complaints, this is actually less about “the best interests of fans” (especially those outside New York) and more about “the best interests of Phil Mushnick, who wants to go to bed.” Keep those hot takes coming, Phil.

4. Ross Tucker thinks Calvin Johnson can’t criticize the Lions because they paid him: NFL lineman turned media personality (he works for Sports on Earth, NBCSN and Sirius XM) Tucker dropped a hot take in response to Calvin Johnson’s criticisms of the Lions.  Johnson cited the team’s struggles and their unwillingness to make a deal to let him go elsewhere as major factors in his decision to retire, and Tucker wasn’t having it:

Not surprised Lions futility a factor in Calvin Johnson's retirement but talking poorly about team that gave you $113M seems beneath him.

To start with, NFL contracts don’t exactly prevent you from criticizing your team’s decisions (as we regularly see) while they’re still in effect, and Johnson’s already retired; why shouldn’t he say what he thinks? The team paid him for his on-field services, which he provided in great fashion, and they prevented him from playing anywhere else. He doesn’t exactly owe them much at this point.

Beyond that, it’s not like Johnson was just trashing the Lions up and down out of the blue (and it would be fine if he was); he was answering questions from media during an appearance at the Italian Bowl. Should he keep quiet and not say what he was thinking? That’s an interesting stance for a media member to take, especially considering that the Lions’ futility as a factor was so obvious Tucker wasn’t surprised by it.

3. Rick Morrissey is mad Cubs’ fans care about the future: Following the Jose Quintana trade (broken by a pair of butt-themed Reddit accounts), TWIHT regular Morrissey penned another one of his bad Chicago Sun-Times hot takes disguised as columns. This time, he complained that fans and the team dared to talk about the future rather than focusing on their current 43-45 season. Here are the highlights from “Present with Quintana should be more important than future“:

It’s a trade that is all about the future, which is fine if the future is what floats your boat. And it apparently floats an armada, judging by Cubs fans’ reaction to the trade on social media. But the interesting part is how little the present seems to matter anymore. I would never say the Cubs are giving up on this season after a 43-45 first half, but the defending World Series champions and their fans sure seem much more preoccupied with the shiny object in the distance that is Quintana’s contract. The team will have control of him for the next three years. Listen to the crowd roar!

But what happened to this season? Or are we supposed to forget that it ever took place?

“We love what it has the chance to do for the team this year,” team president Theo Epstein said of the trade. “But the reality is, it’s a deal we’re looking for the long haul.”

…They think they have a good chance of winning a very down National League Central this season, and the Quintana acquisition certainly helps. But that’s not what this is about, we’re told. It’s not about addressing the past three months of sustained mediocrity. It’s about addressing the next three or four years.

That’s great if you’re the kind of person who lives for tomorrow. If you’re the kind of person who thinks winning back-to-back World Series would be a very cool thing, it seems a little off-point. That’s not meant as a shot at Epstein or general manager Jed Hoyer. It’s their job to think ahead. But if you’re a Cubs fan, it seems wrong-headed to be rooting for the Quintana trade for any reason other than getting this season back on track.

That’s a long way of saying: Talk to me about 2018, 2019 and 2020 some other time. Tell me something good about a team that has lost its way in 2017 after winning the World Series the season before.

Quintana should immediately help an underperforming Cubs rotation, but he’s not Rick Sutcliffe riding to the rescue. He’s not a messiah for this season or any other season.

It takes a certain level of spoiled, and a certain level of short-term thinking, to complain about a team that just won the World Series and is setting itself up for years of success. And this trade is hardly ignoring the present; Quintana will help this season as well, and it’s notable that the Cubs traded top prospects rather than roster players, so they’re not exactly punting on 2017. But sure, tell fans that they shouldn’t think about the future. That’s a way to encourage great elements of your fanbase.

2. Mark Schlereth thinks Tim Tebow is currently a better baseball player than he was a NFL quarterback: Schlereth, FS1’s newest employee, quickly showed he’s ready to bring the ? takes in an appearance on The Herd with Jason Whitlock Wednesday:

"Right now Tim Tebow is a far better professional baseball player than he was a professional quarterback." — @markschlereth pic.twitter.com/Hjqjrcaqze

Schlereth goes on to confirm that he wasn’t joking, and that Tebow’s “a great football player, but he’s not a quarterback.” Look, you’ll get no argument about Tebow’s failings as a professional quarterback from this corner, but to say that he’s currently a “far better” professional baseball player than he was a professional quarterback is absurd. Yes, he’s hitting .327/.421/.551 since his promotion to high-A, and has an 11-game hitting streak going, but that’s still three levels below the majors. Yes, Tebow wasn’t good as a NFL quarterback (his career 47.9 percent completion mark is one of the worst for anyone with substantial playing time), but teams thought he was good enough to appear in 35 regular-season games and start 16, plus start in a playoff win. That’s much more impressive than anything you can do in high-A, and suggesting otherwise is a pretty hot take.

1. Skip Bayless says Aaron Judge is beyond LeBron because he participated in the Home Run Derby and LeBron hasn’t taken part in the Slam Dunk Contest: Yes, this take is just as absurd as that title illustrates. Here’s the quote:

Bayless goes on to say “LeBron dreaded being on that solo stage” and “There’s a lot of pressure in a slam-dunk contest.” The way Shannon Sharpe and Joy Taylor just laugh at this is great. And this is yet more proof of why Fox’s reported desire to have its debaters talk FS1 sports is flawed; hot sports takes don’t always work in baseball and other FS1 sports, and they really don’t work from someone like Bayless who doesn’t seem to know much about the sport. Here’s another bad cross-sport comparison about Judge (from a man ineligible for this column because his takes are too hot):

"Baseball has its Tiger Woods … it's Aaron Judge." — @WhitlockJason pic.twitter.com/5ZXKZICE8n

Hopefully that’s the good part of Tiger Woods. In any case, it seems that embracing MLB debate is going just great over at FS1!

Notable absences: Stephen A. Smith and Colin Cowherd (both on vacation).