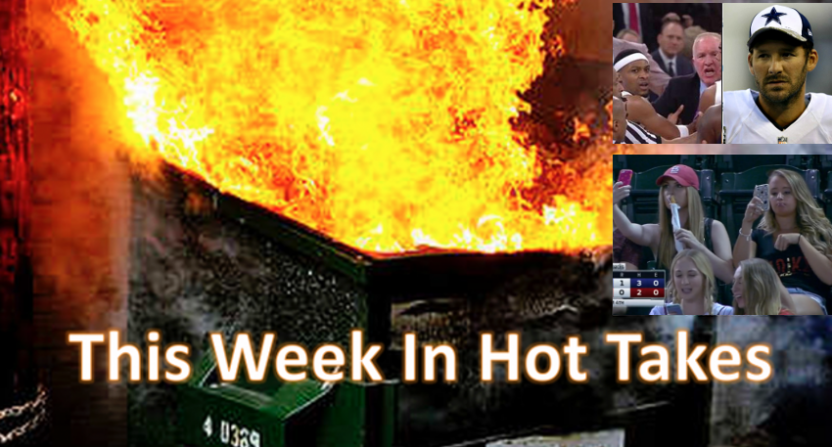 Welcome to another edition of This Week In Hot Takes! Here are some of the hottest takes from sports media figures for the week of March 3-9.

5. Michael Farber thinks Josh Ho-Sang’s desire to wear #66 is “a vanity license plate”: There have been plenty of criticisms of the New York Islanders’ Josh Ho-Sang, but seeing criticism of his jersey number from a respected analyst like Farber (a long-time Sports Illustrated writer who’s currently a special contributor to SI and appears regularly on TSN) is a bit surprising:

Josh Ho-Sang can wear any number he likes, but 4 and 9 are regular hockey numbers. No. 66 is a vanity license plate.

So, can Ho-Sang wear any number he likes or not? And who dictated that the numbers of Bobby Orr and Gordie Howe were acceptable for others to use, but not that of Mario Lemieux? This seems like a silly argument.

With Tony Romo’s expected release or trade by the Dallas Cowboys this week, there have been plenty of takes on his legacy in Dallas, and of course Stephen A. delivered one of the hottest. Here’s his first rant about Romo:

“And then reality kicks in, and it slaps you over your head, and you recognize, EXCUSE ME, 10 years as a quarterback for the Dallas Cowboys, he had two playoff victories. Two! Last time I checked, in order to win a Super Bowl in one year, you’ve got to win at least three playoff games. He won two in 10 years!”

At least that clip also gave us the golden screengrabs of Stephen A. with a box of tissues (above) and of him trying to do either “Wax on, wax off” or the “Bye Bye Bye” wave (about a minute in): 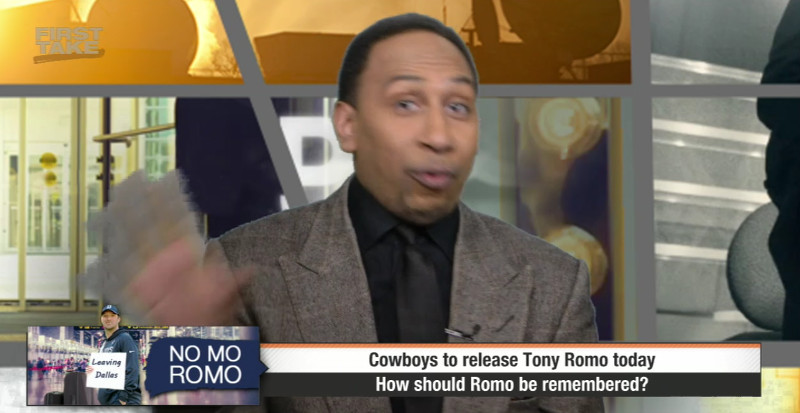 This also led to a great bit later, where Max Kellerman suggested Romo should make the Cowboys’ ring of honor and Stephen A. lost his mind:

“DON’T GIVE ME EXCELLENT! STOP! STOP LYING RIGHT NOW! YOU SET THE CATEGORY OF VERY GOOD! YOU DON’T GET TO USE THE WORD EXCELLENT!”

That created a delightful finger-wag screengrab as well, with Will Cain clapping along for some reason and a great look of horror on Kellerman’s face: 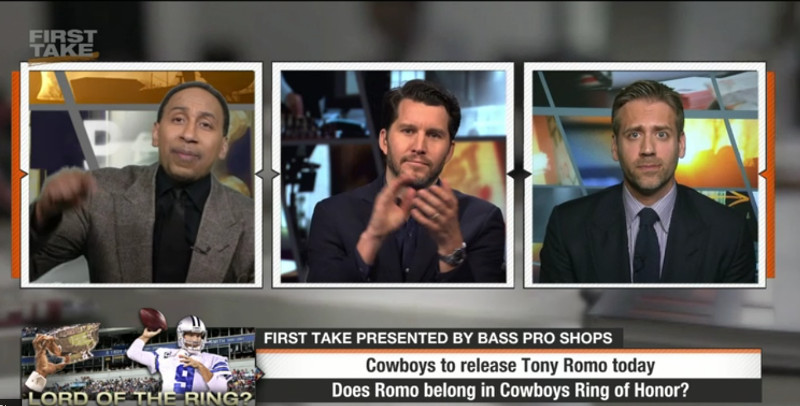 In the end, Smith’s general take (Romo as very good but not great) is defensible, even if judging him by team stats alone probably isn’t fair. However, the yelling, the interrupting and the general theatrics he delivers in these clips really elevates it to hot takery.


3. Phil Mushnick thinks athletes who don’t smile are committing “an invite to murder”: Mushnick, the New York Post‘s resident grumpy old man masquerading as a media critic, is known for his delightful takes. He had plenty this week, including “Reckless cries of racism come at the cost of common sense” (a week after he somehow managed to both defend Dan Le Batard and imply that Le Batard was racist against white people), but his best comes from “Watching basketball on TV quickly turns painful.”

The whole column is filled with a bunch of Mushnick’s typical yelling at clouds about celebrations, on-court scuffles, broadcasters and more. However, it really takes a dark turn when it comes to players’ facial expressions:

Also Wednesday, the Big East Tournament appeared on FS1. In the open to Georgetown-St. John’s, players from several Big East teams were seen on tape, ostensibly leaving their locker rooms to hit the court.

All players shown — 16 of them — were posed mean-mugging the camera, not a smile among them. At a time when both cops and gang-bangers remind us that “just looking at someone the wrong way” is an invite to murder, they all were looking at the camera “the wrong way,” as if these student-athletes were out for blood.

Uh, what? Mushnick wants student-athletes to smile so they don’t get shot by cops or gang-bangers? Or are they the ones out for blood?

2. Clay Travis says ESPN is “collapsing,” becoming “MSESPN”: AA’s Ben Koo did a nice job of explaining why Travis’ math in his most recent anti-ESPN screed is all wrong, but Travis’ screed still deserves hot take recognition. Going beyond the poor numbers and the fact that ESPN is far from “collapsing” (it’s facing challenges for sure, and its profits have dropped from what they used to be, but it’s still one of the most valuable parts of Disney’s giant overall empire), the real hot take is that they’ve made a “pronounced leftward move” in an attempt to stay relevant:

Outkick has heard from a variety of different sources that ESPN is cutting up to $100 million in on-air salaries.

…The cuts will come via buyouts and expiring contracts that won’t be renewed and when those layoffs start becoming apparent many will recognize that what Outkick has been writing for a couple of years now — ESPN is in a world of trouble and doesn’t know how to stem a rapidly collapsing business model.

ESPN’s collapse is the biggest story in sports yet most still haven’t realized it.

That business collapse at ESPN has caused a panic at the network, a desperate grab for relevance that has led to a pronounced leftward move. ESPN’s trying desperately to stay relevant as ratings collapse and subscribers flee. The decision? “We’ll be MSESPN, the home for far left wing politics and sports!” Only, it’s not working.

While there’s a case to be made that ESPN personalities have made more political comments (on and off camera) recently than in the past, and that those comments have often involved criticism of right-wing leaders, calling the network as a whole “far left” is insane. By that token, most of the world’s media outlets (many which have gone much further than ESPN) are now “far left.” And citing this as a planned strategy by ESPN to alleviate subscriber loss is also crazy.

The political shift seems much more likely to be a natural outgrowth of both the increased politicization of the sports world (many sports issues are currently political issues, like it or not) and ESPN’s move to more personality-focused shows. No executive at ESPN is saying “Yes, give me more far-left politics!” In fact, Disney CEO Bob Iger has called claims of ESPN’s political bias “a complete exaggeration.” But sure, Clay, claim ESPN is collapsing (which they’re not) and blame it on grossly overstated claims about their political bias.

1. Rick Morrissey has hot takes on millennial baseball fans and selfies: The top delightful absurdity this week comes from Chicago Sun-Times columnist Rick Morrissey, in this piece cleverly titled “For attention-span problems, MLB has only it-selfie to blame“:

How do you make a sport more attractive to a person who likes to take photos of himself or herself? Whether Major League Baseball knows it or not, that’s the question it’s asking itself these days.

The ongoing discussion about how to quicken the pace of the game is the broader theme to a very specific problem: how to get millennials to pay attention to something other than the iPhones in their hands. Which is to say the discussion is about how to get them to forget — for several hours — that monument to self-absorption, the selfie.

These aren’t the musings of a get-off-my-lawn type, though, while we’re on the subject, could you keep to the sidewalk? Thanks. No, these are the observations of someone trying to zero in on what MLB is up against as it tries to engage younger fans.

No, I’m pretty sure those are the musings of a get-off-my-lawn type. In his defense, Morrissey does later point out that people have always been engaged in things other than the game at baseball games, but the whole column is still generally out of touch and missing the point. All those selfie-taking fans who’s criticizing (and what, that occupies maybe ten seconds of their three to four hours at a game?) are still paying customers, and they obviously haven’t been turned off from attending by pace-of-play. The bigger issue for MLB would seem to be not those who buy tickets and take selfies, but those who don’t buy tickets or watch games at all.