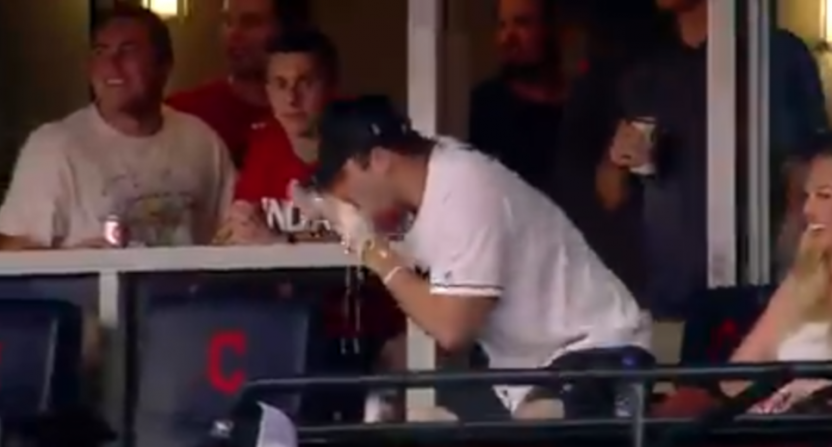 A quite funny element with some hot takes is how predictable they are, something we touched on Friday in our final This Week In Hot Takes column. From Phil Mushnick yelling about rappers to Stephen A. Smith ranting about Kevin Durant, certain takes crop up time and time again. And Fox Sports pundit Colin Cowherd is perhaps particularly known for those recurring takes, whether they’re about the Midwest, the South, the Dominican Republic, or specific athletes like Sean Taylor and John Wall. One of Cowherd’s latest athlete feuds is with Cleveland Browns’ quarterback Baker Mayfield,  and they’ve had fiery exchanges with both in person and from a distance. And hilariously enough, the Cleveland Indians predicted how Cowherd to Mayfield’s latest moment in the spotlight would react two days before Cowherd, despite being aware of their prediction, still lived up to most of it.

On Saturday, Mayfield attended an Indians’ game, and was shown on the video screen drinking a beer. A fan then tossed him another one, and Mayfield quickly shotgunned it. And then, when tweeting out the highlight, the Indians did it with an imaginary quote from Cowherd blasting Mayfield for this:

"I just don’t like the idea of my franchise quarterback spending time at a baseball game. I mean, what are you doing, @bakermayfield? You don’t see guys like Aaron Rodgers shotgunning beers. Just not a good look. Go watch some film." – @ColinCowherd (probably)

And Cowherd himself retweeted that Sunday:

Then, on his radio/FS1 show The Herd Monday, Cowherd pretty much lived right up (or down) to those expectations. He didn’t specifically go after Mayfield for being at the baseball game, but he did have some criticisms for the beer-chugging, in particular saying that Mayfield was “too good” at it (yeah, that’s a criticism, all right!). And he implied that Mayfield’s only putting on an act to get on fans’ good sides.

?️@ColinCowherd: “@bakermayfield looked like he was a little ??? ???? at that beer chugging…

Here’s the audio of that segment:

“They take a picture of him with a beer, he takes a beer, and then he realizes the camera’s on, and he goes ‘Throw me a beer,’ and he bites into it and rips it open, and it’s very funny. He points to his jersey, and of course Cleveland loves him because it’s Cleveland, this is a franchise that hasn’t had any fun at quarterback for 30 years, and Baker Mayfield’s a lot of fun, and he’s a showman.”

“And he was waiting for that moment because he knew they’d put him on camera, just like the underwear ads before the season started. And the Cleveland Indians had fun with it, they went to Twitter and social media, because they haven’t won a World Series since like, ever. And they’re making fun of me and they knew I’d overreact to it.”

“But I’m not going to overreact to it. ‘Colin, what’s your reaction to this?’ Baker Mayfield is perfect for Cleveland. This is an organization where Peyton Hillis, a fullback, was a really big deal. They don’t celebrate championships. They don’t celebrate division titles. Right now they just want to celebrate ‘We got a new quarterback! And he wants to be one of us! And we would shotgun beers!'”

“Cause it’s Cleveland, and he’s perfect for Cleveland. Anyone in Cleveland who gets famous leaves. LeBron twice, the Rockefellers, Drew Carey, Joe Walsh of the Eagles, hell, the Browns left! Manny Ramirez! C.C. Sabathia! Of course Cleveland’s putting their arms around him!”

“Now if I was Baker Mayfield, 1-5 against winning teams with a rookie head coach who’s never even been hired as a coordinator…if you take two games out of Baker Mayfield’s year last year against the atrocious Bengals, where he had seven touchdowns and no picks, his numbers were really, really, average. Even for a rookie quarterback, they were pretty average.”

“This morning, Cleveland and Baker feel like the NFL’s best frat house. Best parties, best beer chuggers, a lot of alpha, and the funniest guys. But like the Browns, the plumbing hasn’t worked at that frat house in 28 years. And I’d never ever want to live in a frat house.”

“But the best time to be in a frat house? You guys know what it is. And I’m not going to speak for women and sororities, but the best time for a frat house is rush week. September! No big midterms yet, no finals yet, the front door is still on its hinges, they’re throwing the best parties, the weather is perfect, and nobody has been thrown out yet.  And it’s rush week at the NFL’s best fraternity house.”

“But I will say, O Delta Baker is a hell of a frat house here in rush week. But have you ever watched those movies with frat houses? Think of those great movies with frat houses you’ve watched. You know what they’re always about? The frat guys, due to bad behavior, trying to keep the house. The school wants to take it back, the local municipalities want to take it back. So congratulations.”

“I thought Baker was a little too good at that beer chugging, and a little too good for my franchise quarterback, 1-5 against winning teams. But it’s Cleveland, stars leave. He’s showing he loves you.  He’s part of you, he’s one of you, I’m wearing your jersey, I drink beer like you, I chug like you. You’re mine, I’m yours. And of course, it’s Cleveland, of course that has massive impact and feels so wonderful. And right now, they are the coolest frat on campus. Which is the best place to be during rush week, September, nobody’s flunked out yet. I’ll take the Steelers, Patriots, Chiefs, Colts, Eagles and Rams during Finals Week.”

Apart from that being a tortured analogy, it’s funny that after saying “I’m not going to overreact to it,” Cowherd still reads a whole lot into a quarterback having a beer at a baseball game, spending five minutes using that as a way to criticize Mayfield. And he does pretty much what the Indians predicted he would, especially with criticizing Mayfield’s shotgunning of the beer. Yep, Mayfield daring to drink a beer at a baseball games is definitely proof that he and the Browns are just a fun-loving fraternity that will never study or succeed, all right. You have to wonder what Cowherd could see in an ink blot…