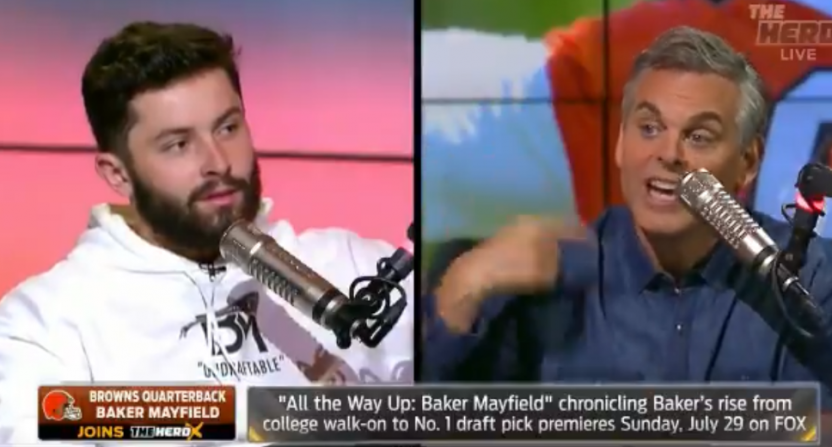 Former Oklahoma Sooners quarterback and 2018 first-overall NFL draft selection Baker Mayfield has generated plenty of hot takes over the past year, but he isn’t just taking them lying down. When Mayfield was booked on FS1’s The Herd Thursday to promote a new “All The Way Up: Baker Mayfield” documentary (premiering July 29 on Fox) about his rise from three-star recruit to the Cleveland Browns’ choice with the first overall pick, Colin Cowherd (previously seen criticizing Mayfield for, among other things, being “shirtless in SI” and deeming him “downright undraftable” over a video of him running from police officers) decided to go straight at Mayfield near the end of their segment, showing videos of a celebration Cowherd didn’t like and of the aforementioned police incident.

Mayfield has said he’s keeping a list of media members who have “crossed a line,” presumably including Cowherd, and he shot right back:

Mayfield responds “Our band is over there, our student section is over there. And then straight back to our sideline.”

Cowherd says “What about the rest of your team?”

Mayfield says “Did you watch the rest of the game?”

Mayfield says “That means, like, the three touchdowns before that too?”

Mayfield says “Oh, okay, yeah. You pulled the one clip of me running right there, to our fans and to our people that traveled well to that game, first of all, and then you didn’t show the rest of the clip of me going to the sideline?”

Mayfield says “Well, you’re acting like I just ran away from everybody.”

Cowherd says “Well, you did, but then you came back and circled to the sideline.”

Mayfield says “This is what, a five-second clip you’re showing me? Then I’m off the screen right there?”

Cowherd says “I’d like you to be with your teammates.”

Mayfield says “Watch the rest of the game. I was.”

Cowherd says “Oh, I know you went back to the sideline.”

Mayfield says “No, no, no. Watch the other touchdowns. I got very excited on that one.”

Cowherd says “So you think my accusation that this…”

Mayfield cuts him off and says “I feel like you’re going for the fact that I’m not a team guy. I’m selfish. Is that what you’re shooting for right here?”

Cowherd says “No, I don’t think that. I think sometimes your judgement’s just a tad off, and the NFL’s a judgement league. The game is so fast and the window gets really really tight, really really small. You’ve got to make decisions really really fast. In college, you’ve got that Orlando Brown guy (a then-Oklahoma offensive tackle, now with the Ravens), you got a little more time. I don’t love that decision, I don’t love it.”

Mayfield says “The celebration? Do you see what people do in the league now?”

Cowherd says “Hip-thrusting, not a fan. I’m not a big fan of hip-thrusting, I’m not going to lie to you, I don’t like when Antonio Brown’s doing that stuff, I’m not into it. You know what? Do you have your celebration planned?”

Mayfield cracks up laughing during the Brown comments and then says “No, I have nothing.”

Cowherd says “You’re just going to give the ball to the official?”

Mayfield says “Apparently, I need to just run away.”

Cowherd says “All right, we’ve got to get to the other one. And the other guys showed it too, I don’t think I’m being a jerk.”

Mayfield asks “What is it?”

Cowherd says “I have a general rule, I don’t like my quarterback showing up on police video. I don’t love this.”

Mayfield says “That’s actually what you said I was undraftable for. So let’s watch this.”

Cowherd says “I don’t like this, it doesn’t do it for me. What are you doing?”

Mayfield says “I was not in trouble. The state of mind I was in, which shouldn’t have happened, they started asking me questions, I watched somebody get just absolutely socked right in the face, so I was answering questions.”

Cowherd says “So you were in an area where something bad happened?”

Mayfield says “Yep, yep. I was never directly in trouble. When they were asking me questions, for some reason, I thought I was in trouble, and decided to try, I wouldn’t say to run away, because that’s not real good speed right there.”

Cowherd says “When you look at that now, are you embarrassed, are you mad?”

Mayfield says “Absolutely. There’s so much regret about that. Because if I didn’t run, there would have been nothing. You wouldn’t have said that I was undraftable, and then nobody probably would have been questioning me about if I would be the next dropout out of football. So there’s a lot of regret to it, but at the same time that was a rude awakening to responsibility, accountability for me. It’s a lesson that was harshly learned. Yeah, I could have learned it over time, but that was just very eye-opening for me.”

There’s important general history here with what people have said about Mayfield, from Kirk Herbstreit citing his flag-planting as “uncalled for” to Berry Tramel calling his crotch grab “a repugnant act,” and from Stephen A. Smith finding his press conference “too dramatic” to Cowherd’s past criticism. So it’s not just Mayfield getting upset about these particular comments, it fits into a whole history of what Cowherd and others have said about him. And Mayfield handles this quite well, calmly and logically refuting Cowherd’s arguments instead of blowing up at him LaVar Ball-style. (And it’s an awfully good thing that Cowherd isn’t actually a NFL general manager. Considering his “undraftable” take on Mayfield, he probably wouldn’t be a general manager for long.)

This was entirely foreseeable and avoidable if FS1 didn’t want to book someone who’d argue with one of their prominent personalities and make the personality look bad. But that’s presuming that they value that more than the value all the attention The Herd is getting from this (much more than anything that happens on the show usually gets!), and that may not be the case. Yes, Cowherd looks exceptionally dumb for this, and for using his time with Mayfield to argue about a September celebration instead of anything, you know, relevant. But FS1’s studio programming is getting some attention as a result, and that’s more than they can say on most days.