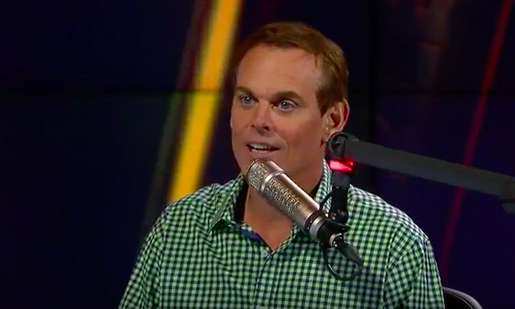 It doesn’t take very much to get Colin Cowherd going on his disdain for John Wall as well as his disdain for Johnny Manziel. Give him the chance to combine the two and it’s Christmas in February for the Fox Sports radio host. He did just that in a recent segment about Manziel, who is expected to be cut by the Cleveland Browns next month.

“When I looked at Johnny Manziel: Money sign, in a bathroom in Vegas rolling up a dollar bill, all over Instagram,” Cowherd said. “You’re not mature enough. And so I said this all the time when I was critical about John Wall. What I said about John Wall is what I’ve said about Johnny Manziel: It’s not the talent. But I’m going to watch you, watch your background, look at your upbringing, look what you dealt with, and make some calls on it. Because to be a No. 1 pick in the NBA or a first-round pick in the NFL, you’re not going to bomb out because of talent. You’re going to bomb out or flame out because of maturity and judgment.”

“…I mean, if you talk about maturity, oh, it’s race. It has nothing to do with race. I mean, what’s the difference between Johnny Manziel and John Wall? I mean, [do they have] talent? Lots of it. Maturity? I don’t want my point guard in make-it-rain situations, kicked off flights. I don’t want that stuff. Johnny Manziel, I don’t want my quarterback doing this [gesture], money money money, signing autographs in college, putting his team in peril. I mean, it’s really funny: if people give you signs in life of their maturity level, just watch it. People tell you who they are. Just watch it. Just listen, just watch, and they’ll give you signs.”

Dan Steinberg of the Washington Post was listening, likely because anytime Cowherd mentions John Wall it probably sets off some kind of bat signal for the D.C-based sportswriter. He decided to point out a few discrepancies in Cowherd’s “Manziel is Wall is Manziel” theory, especially as far as his point that guys like Manziel and Wall can’t succeed.

Steinberg lists out ten ways that John Wall is, in fact, nothing like Johnny Manziel, including this gem:

Wall was recently named the Eastern Conference’s Player of the Month. Manziel has never kept a starting job for a month.

The point being that Wall has actually improved and proven himself on the court. What he does off the court is unrelated to the success he’s found on the court. And he certainly is not deserving of being the same conversation as Manziel, who has accomplished very little at a professional level. As Dan says, the only ways the two are alike is their first name and the fact that “they have both been seen dancing in public at least once.”

Of course, the point is that Cowherd has dug in on John Wall and decided he’s “a bad egg” and nothing short of Wall personally-apologizing to Cowherd for… something… will ever change that. Wall could donate his entire salary to poverty-stricken families, clear the national debt, and find a source of clean renewable energy for the entire world and Cowherd would still likely complain that he didn’t do it “the right way.”

Towards the end of the program, Cowherd was challenged by co-host Kristine Leahy to recognize the Wall has improved and it was like trying to squeeze water from a stone.

“John Wall’s matured, a little bit, over the years.”

Well, if we’re holding everyone up to the reigning league MVP and best player on the defending champs, everyone else in the NBA is just like Johnny Manziel. And now we’ll wait for the next time an athlete strays from the straight and narrow path, just so Colin Cowherd can compare that person to John Wall and remind us of the most bizarre vendetta in all of sports media is still alive and well.