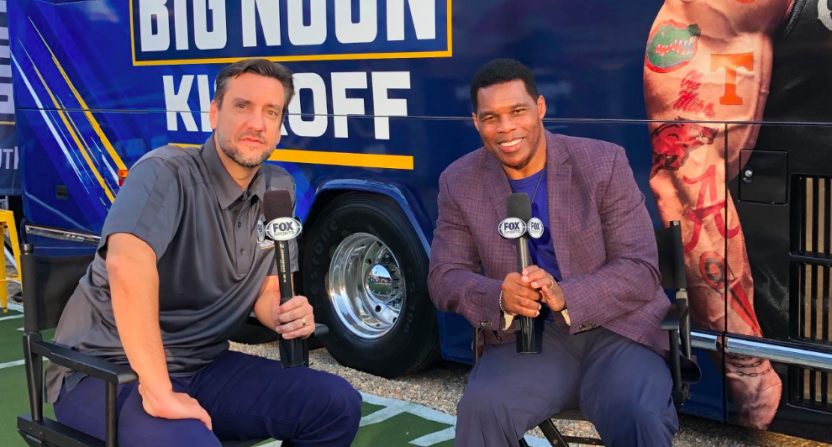 “Most sports fans watch sports to escape politics,” said Clay Travis on Twitter in April 2021. “I’ve always said it’s just bad business to alienate any consumers with politics when your business is designed to appeal to everyone.”

Travis, whose conservative-minded Outkick was bought by Fox earlier this year, has made a career out of pushing back against a perceived liberal political agenda in sports. On many occasions, the outspoken radio and TV commentator has blasted networks like ESPN for showcasing political content or allowing its talent to espouse beliefs that veer to one side of the political spectrum over the other.

On Saturday, during Big Noon Kickoff, Fox aired an interview conducted by Travis with former college football and NFL star Herschel Walker, who is currently running for U.S. Senate as a Republican candidate in Georgia. The interview was part of Travis’s work as a special correspondent for both Big Noon Kickoff on Fox and Fox & Friends on Fox News.

There were segments of the interview that would have been pretty normal to see on any pregame show, such as Walker discussing how he thinks Reggie Bush deserves his Heisman Trophy back.

But the interview also touched on some very political points, not to mention the fact that interviewing a candidate currently running for the U.S. Senate is a political act in and of itself.

Naturally, quite a few people on social media couldn’t help but note a sense of hypocrisy with the whole thing.

I'm old enough to remember when Clay Travis told ESPN not to mix politics and sports.

Wait….so you're telling me Clay is nothing more than a blowhard MAGA hypocrite? huh….who would have thought

Clay Travis regularly bitches about how sports have become too political, and tet here he is today doing this. And he's gonna go right back to complaining, acting like this moment with Walker never happened. https://t.co/bvc4KUQeyf

Noting the hypocrisy wasn’t just limited to Travis but also to Fox and Fox Sports as well, considering the way ESPN has been slammed in recent years for things far less overt as this.

Fox News merging with Fox Sports was probably inevitable, and in retrospect every year that hadn’t happened, we were on borrowed time

“Stick to sports” is and always was bullshit, but if this is a sign of what’s to come from Fox and Big Noon Kickoff, we might be entering a whole new phase altogether of sports and politics merging.