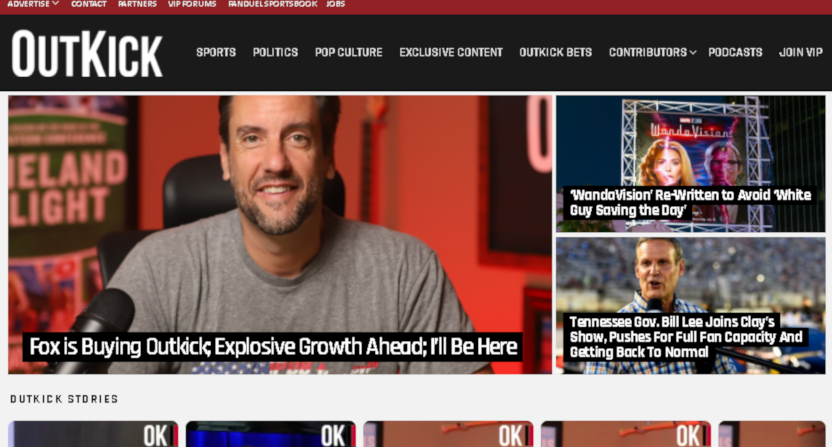 The Clay Travis-founded site OutKick (originally Outkick The Coverage) is about to be acquired by Fox. Fox CEO Lachlan Murdoch announced that move on their earnings call Wednesday, as per Brian Steinberg of Variety:

Here’s more on that from Steinberg’s write-up:

The acquisition was unveiled by Lachlan Murdoch, the company’s CEO, during a call with investors on Wednesday. Financial terms were not disclosed. Outkick, said Murdoch, is a leader “in sports news, and more critically, sports opinion,” and is likely to align with Fox’s core audience.

…Fox plans to operate Outkick as an independent brand. Clay Travis will serve as its president. Savage Ventures, a partner in the site, will continue having an operational role in the business.

Here’s a press release on this posted at OutKick:

Fox Corporation Executive Chairman and Chief Executive Officer Lachlan Murdoch commented: “As FOX further diversifies our growing digital portfolio and broadens our position in the sports wagering ecosystem, there could be no better acquisition than Outkick. Clay and his team have quickly made Outkick a content powerhouse with a very large, loyal and engaged audience. We expect the synergies presented across FOX’s existing portfolio of assets will turbocharge this exciting business.”

Travis added: “Outkick has grown out of my passion for producing bold, well-informed, and entertaining content about sports, current events and, more recently, sports wagering. With the power of FOX behind us, we look forward to maintaining Outkick’s unwavering commitment to that mission, as well as further accelerating the growth of our audience, and continued leadership in the sports wagering affiliate category.”

As the big tech companies have grown, their power has become virtually unchecked. I’ve seen these big tech companies stifle Outkick articles and ideas they disagree with and seen how their actions have impacted our business in a major way. I’ve wrestled with the question of what’s the best path forward for Outkick in light of the looming power of big tech and its ability to cancel anyone. What would happen if suddenly all of Outkick’s social media outlets were shut down like happened to the New York Post this past fall? We’ve grown to have a large audience at Outkick, but how do we achieve the scale necessary to protect ourselves and ensure we can continue to advocate for the ideas we hold dear without the fear that our business can be canceled by the power of big tech?

I came to the conclusion this spring we needed scale, a big partner who could take our video, radio, podcasts, gambling, and website content to the proverbial next level. Over the past several months many companies put in bids to buy Outkick. That’s because our business is thriving, particularly our sports gambling business, where we are one of the largest affiliate sites in the country, signing up customers in all ten states where online gambling is legal. Sports gambling is poised to explode in the years ahead and I wanted to make sure whichever partner we picked fit our company’s direction. Who could merge all the disparate pieces of daily Outkick: sports, politics, news, opinion, pop culture and sports gambling video, radio, podcast, and written content into one cohesive media experience?

The answer, after much debate, consultation and consideration, was Fox, the American leader in sports, politics, news and opinion. And the media company, I believe, best positioned to win in the world of sports gambling in the future as well.

Which is why I’m excited to announce an important milestone that I believe will take Outkick to the next level, after ten years of being owned by me, Outkick is being purchased today by Fox. With Fox’s purchase will come a profoundly massive investment in new content creators and in our existing employees and infrastructure. Outkick is going to get much bigger and much better immediately. If you already loved us, you should be thrilled. If you already hated us, you should be terrified. Because with the power of Fox’s distribution network and investments in our people and products, Outkick is poised to dominate like never before. Today we begin our newest and best chapter.

OutKick has had a lot of crossover with Fox in the past few years, both with Fox Sports and with Fox News. Travis hosts a daily Fox Sports Radio show and is also a daily commentator on FS1’s Fox Bet Live (formerly Lock It In). Travis has also often appeared on Fox News (following a brief hiatus in 2017, which Travis said came from pressure applied by Disney’s Bob Iger during the Disney-Fox sale), and Outkick writers have interviewed Fox News personalities like Tucker Carlson. OutKick has also featured interviews with Tennessee governor Bill Lee, Florida governor Ron DeSantis, and Georgia governor Brian Kemp, with some of those interviews originating on the site and some originating on Travis’ Fox Sports Radio show. Travis also interviewed then-U.S. president Donald Trump a few times on his radio show in 2020. And, as noted in those releases, OutKick has an affiliate relationship with FanDuel, as does Fox.

This comes on the heels of a flurry of tumultuous news involving OutKick and former FS1 personality Jason Whitlock. Weeks after leaving FS1 last June, Whitlock joined OutKick as a columnist, podcaster and rumored investor (he would go on to deny any planned investment). After that, Whitlock interviewed Trump in person at the White House for OutKick last fall, and he produced several podcasts and columns for the site. However, the high-profile marriage ended abruptly when Whitlock left OutKick in January. He subsequently claimed his agreement with the site saw broken promises, saying that Outkick’s third partner Sam Savage refused to invest an previously-agreed-upon $500,000 into the site. OutKick disputed that in a statement.

Nothing has come out yet on what Fox paid for OutKick, or on if they have any plans for integrating OutKick personalities and content with their other sports and news properties (which could still happen even with it as an “independent brand”). Those will be areas worth watching in the days ahead.