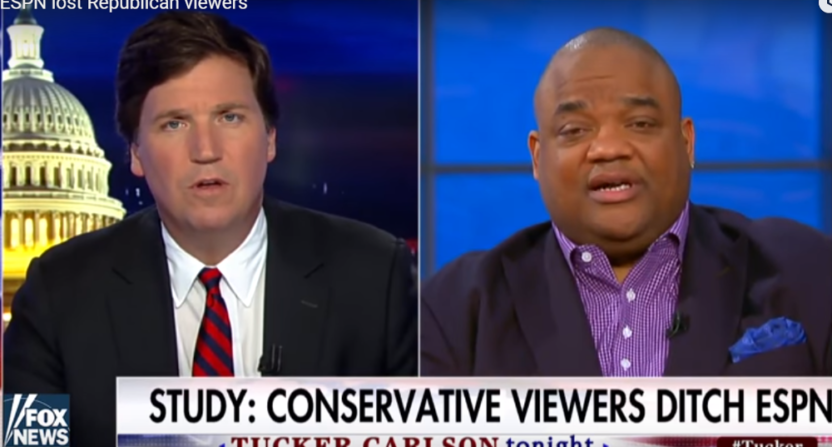 With ESPN under fire from all sides for its handling of the Jemele Hill situation and other incidents like Robert Lee’s removal from a Virginia game, Fox Sports may benefit to some degree. There are other sports networks out there as well, but Fox has most prominently put itself up against ESPN, and FS1’s shared ownership with Fox News may give it somewhat of a boost as an option for conservatives mad at how Bristol has acted here. It may also be an option for those who think ESPN is “too political.”

But that has some asking if Fox is just a beneficiary here, or if they and their associated personalities played a deliberate role in amplifying some of the firestorms beleaguering ESPN. Some ESPN executives told Sports Business Journal‘s John Ourand they believe it’s the latter, saying that while some of the controversies their network has faced are “self-inflicted,” Fox has taken them to a new level:

Outside of recognizing that these situations could have been avoided, there is also a growing belief among ESPN stalwarts that some of the problems are not all self-inflicted. Some believe that 21st Century Fox is orchestrating attacks against ESPN to bolster the fortunes of rival sports channel FS1.

…A 21st Century Fox spokesperson forcefully dismissed such a contention last week, saying it “couldn’t be further from the truth.”

What some would call corporate paranoia, ESPN insiders instead pointed to the Lee and Hill dust-ups as examples of these attacks — stories that started online, were amplified by some of Fox News’ most popular shows and eventually picked up by other big media outlets.

…For some in Bristol, Fox News’ role in hyping these stories is an examples of a rival putting its main competitor in a poor light — going so far as to plug its sister sports network. Fox News shows continued to cover the Hill story throughout the day and into its highly rated prime time.

Several former and current Fox employees pushed back. They say they have never heard of such a directive at either 21st Century Fox or News Corp., saying it would be virtually impossible to get such diverse groups at 21st Century Fox to buy into such a directive. Each pointed to Hill’s story — a well-known, high-profile African-American woman making an impolitic tweet about a Republican president — as “cat nip” for Fox News viewers. The decision to focus on Hill, they say, had more to do with generating ratings for Fox News than helping one of its sports channels.

Elements of this do somewhat seem like a larger Fox corporate plan to amplify stories that paint ESPN in a bad light, particularly when it comes to Jason Whitlock (seen at right above on Fox News host Tucker Carlson’s show in June). Whitlock co-hosts FS1’s daily Speak For Yourself and has spent much of that show ranting against perceived political correctness, especially when it comes to Colin Kaepernick, but doesn’t frequently directly mention ESPN there.

However, his more important role (especially considering SFY‘s ratings) may be as what we described as “FS1’s brand ambassador to conservative viewers” back in June, when his repeated appearances in other Rupert Murdoch-owned media outlets (the Wall Street Journal, Fox News and Fox Business) to criticize ESPN became particularly prominent. And that’s only been amplified since then, with Whitlock’s WSJ columns continuing (and frequently showing up as promoted tweets) and him regularly appearing on Fox News (especially on Carlson’s show) and Fox Business, with most of those media spots revolving around ESPN.

Of course, Fox News and those other Murdoch outlets probably think ESPN’s issues are a good story to some degree regardless of what it means for their own sports channel, and they aren’t wrong there. The self-proclaimed Worldwide Leader has cost-cut in an extremely prominent way over the past few years, especially with late April’s extensive cuts of on-air and writing staff (which really kicked Whitlock’s ESPN-bashing on Murdoch platforms into high gear), and that’s a story being covered by all sorts of newspapers, TV outlets, online sites and more. It’s an important story for what it means for cable TV, cord-cutting and more, and it deserves coverage.

However, the Murdoch platforms’ coverage (especially when it includes Whitlock) has been notable for presenting the “ESPN is struggling because they’re too political and too liberal” slant on their business issues. And that doesn’t really explain much of what’s going on here. Ian Crouch had a good New Yorker piece titled “ESPN Can’t Win In Trump’s Rowdy America” this week, which included a notable passage about the “it’s all about their politics” theory:

The network has lost more than twelve million cable subscribers since 2011; in April, it laid off roughly a hundred employees, two years after it laid off more than three hundred. There are two basic explanations for this retrenchment. One, based in fact, points to a decline in the number of cable subscribers in the United States, and thus a decline in the number of people who pay, through their cable packages, for ESPN. The other, based on alt-right fairy dust and angry tweets, suggests that ESPN is losing viewers because of the network’s sinister, coordinated shift to the left, which has been driving away conservative and moderate viewers.

Critics on the right don’t have the numbers to prove this, but they had plenty of prominent examples of ESPN’s so-called liberal bias: the celebration of Caitlyn Jenner; the firing of the former ace turned conservative firebrand Curt Schilling; the positive coverage of the national-anthem protests by Colin Kaepernick and other N.F.L. players; the prominence of younger, progressive on-air talent, including Bomani Jones, Dan Le Batard, Jemele Hill, and Michael Smith. In these criticisms, there is often an unfortunate and reflexive conflation of “liberal” with simple diversity—a seeming discomfort with the new reality that the people talking about sports on TV look, finally, like the athletes who play those sports.

Talking about the waning of ESPN as a story of eroding subscription rates and ad buys is boring. But the idea that a major television network shot itself in the foot by alienating a large portion of its viewership, a demographic that also happened to be the same “forgotten Americans” who helped put Donald Trump in the White House—well, that’s exciting. And so, regardless of the plain truth, sites like Outkick the Coverage and Breitbart, through sheer persistence, have managed to reframe ESPN’s business problem as a culture problem.

What’s notable there is that the latter sites aren’t really Fox-affiliated, though (Clay Travis’ Outkick The Coverage was, but they parted ways months ago, and while his show is still on Fox Sports Radio, that’s a brand name; Fox Sports Radio is run by Premiere Networks, owned by iHeartRadio), and that speaks to how bashing ESPN and painting their struggles as political extends far beyond Murdoch’s platforms. There’s a big appetite for those stories, as the success of those sites in covering them has shown, and non-Murdoch networks like CNN (owned by Turner/Time Warner) have given platforms to the likes of Travis to advance that viewpoint, sometimes with unusual results involving his professed love for boobs.

So, there’s definitely a wide swathe of those shouting that “ESPN is too political,” and it’s certainly not only  a Fox campaign. And Fox employees’ description of Fox News covering this because it draws ratings for them seem accurate too, at least to some degree. But it also feels like ESPN execs’ complaints of Fox “orchestrating” (something VP of programming Burke Magnus complained about in  detail publicly earlier this summer) this do seem to have have some merit, especially when it comes to Whitlock being given repeated high-profile platforms within the Murdoch empire to bash ESPN (and generally plug his FS1 show in the process). A “news value only” look at ESPN likely wouldn’t have Whitlock as a recurring commentator, especially in an outlet like the WSJ, but his reliable “ESPN’s failing over politics” takes and show on a corporate sibling presumably boosts his value.

In any case, though, it doesn’t really matter if Murdoch’s companies are playing up the “ESPN is too political” narrative because of corporate synergy and strategy, their own audience’s appetite for negative coverage of ESPN, or both (the most likely answer). What matters is that they’re bashing ESPN for this, and that they’re likely to continue to do it. And they’re far from alone; Travis’ war with ESPN in particular isn’t going anywhere, and it seems likely that others are going to continue to escalate it as well.

This is further exacerbated by the “self-inflicted wounds” described in Ourand’s piece. The Lee situation in particular was decried as a huge overreaction from critics on both the right and left, and ESPN’s response to the Hill controversy has not only ticked off the right for their lack of outright punishment of her, but angered many on the left for their less-than-fervent defense of her (to say nothing of their reported attempt to take her off the air). And many of their efforts, such as bringing back Hank Williams Jr. (who initially lost his ESPN gig in 2011 after comparing President Obama to Adolf Hitler in comments on Fox News) but pairing him with Jason Derulo, Florida-Georgia Line and a whole lot of autotune, feel like attempts to please everyone that instead wind up making everyone angry.

So there’s plenty of ammunition for the ESPN critics, both from Fox and elsewhere. And regardless of how much of a role Fox is playing in actually “orchestrating” it, which could be small or large, it’s probably something they’re happy to see. The ESPN-FS1 rivalry has never been a friendly one, from the early “ESPN alternative” talk to the shift to debate and hiring ex-ESPN personalities to whatever the current direction is following Jamie Horowitz’s firing, and any blow to ESPN can benefit Fox on several fronts; lost ESPN viewers or subscribers reduce the Worldwide Leader’s advertising and financial edges (and make FS1’s offerings look more compelling) even if they leave altogether rather than going to FS1, and while lost ESPN subscribers are probably leaving FS1 and Fox News too (thanks to the way most cable bundles work), some lost viewers may watch FS1 more regularly than they had. And that’s to say nothing of ESPN cuts freeing up more talent for Fox.

Thus, ESPN’s issues in general and the “ESPN is too political” narrative in particular benefit Fox in some ways. And Fox is certainly furthering it in their programming on Fox News and Fox Business, and in the pages of the WSJ. How much of that is a corporate plan and how much is those outlets following their own strategy can be debated, but it seems unlikely this is completely individual on the part of the different Murdoch outlets, especially when it comes to Whitlock’s omnipresence on those platforms. And it’s definitely working out for them.