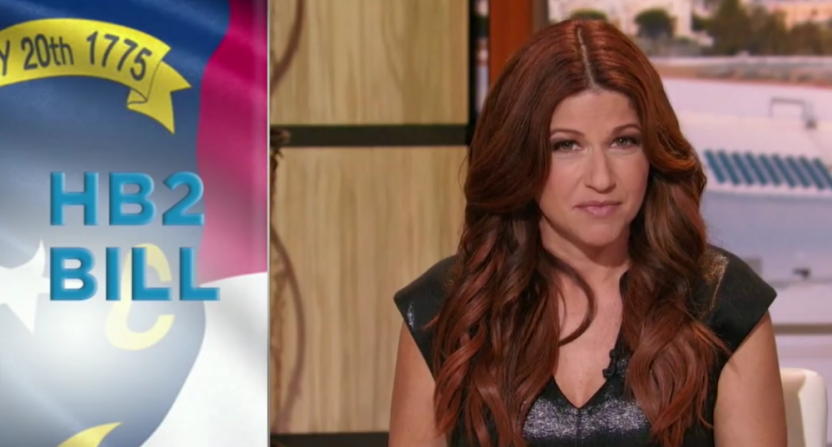 The political guidelines ESPN handed out in January 2016 (including “We should refrain from political editorializing…including but not limited to on platforms such as Twitter or other social media”) haven’t been fully enforced in some time, as many ESPN personalities have taken to more and more explicitly political commentary both on ESPN’s airwaves, on other media outlets, and on social media platforms. As ESPN public editor Jim Brady writes, the company has now updated those guidelines to allow for much more discussion of politics, especially when they intersect with sports (which is a regular occurrence these days). However, the new guidelines appear to still have some areas that could potentially cause problems.

Sports and politics are constantly colliding these days, and ESPN’s right to update their policy to reflect that. It’s not just their personalities who want to discuss issues where sports and politics collide; the company itself has had a tougher time staying neutral. Even things like the ESPYs have taken on political dimensions, whether it’s giving  awards to Michael Sam or Caitlyn Jenner or letting LeBron and other NBA players open the show with a statement about recent shootings involving police.

ESPN has been blasted by some critics who think they’re too left-wing, but was defended against charges of political bias by Bob Iger (CEO of ESPN parent company Disney). Still, the most notable political commentary has come from ESPN employees rather than the network itself, and it’s clear that they needed to come up with something new to cover how they’ll handle employees talking politics. The 2016 memo wasn’t going to work and wasn’t being enforced.

The new approach is much more in line with the common-sense, case-by-case, judgement-call-based approach to social media ESPN favors these days, something Brady wrote about earlier this year. It allows for political commentary by those not involved in hard news reporting, both on air and on social media, but subjects that to some restrictions and wants it to be done in ways that meet ESPN standards. Here are the full guidelines: 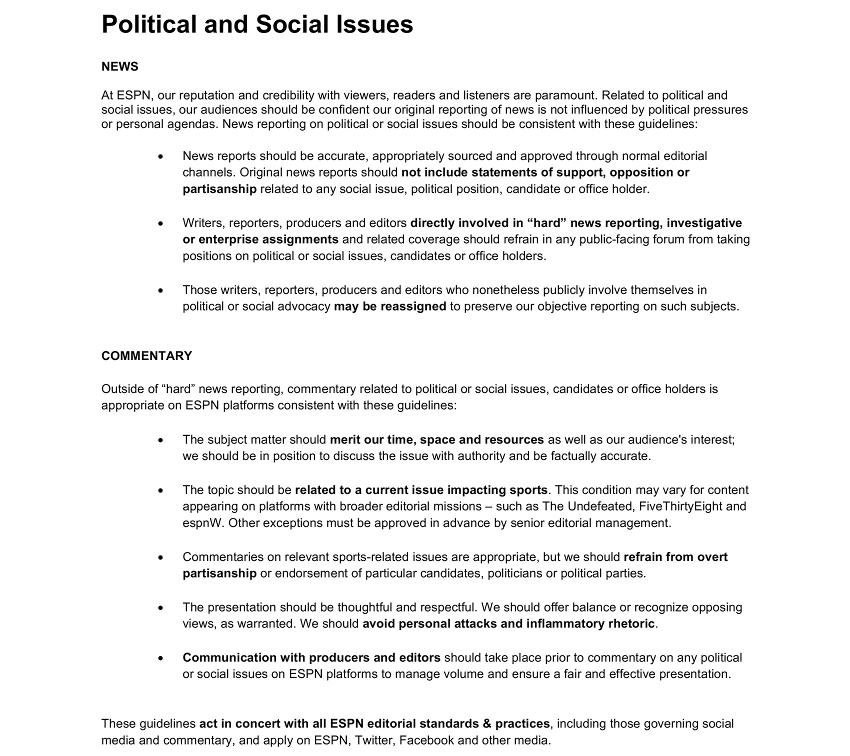 Those guidelines generally work, but there are a few issues with them. For one, saying the commentary guidelines apply on Twitter and Facebook as well as ESPN platforms may be problematic if they intend to enforce it. The political commentary on ESPN platforms has generally been directly connected to sports and has generally refrained from particular endorsements of one party or politician and/or criticism of another party or politician (there has been criticism of specific bills and initiatives, but that’s different), but that’s not the case for some ESPN personalities’ Twitter feeds.

Some of the commentary on those personal Twitter feeds has not had any connection to sports, and has been more directly for or against particular politicians. Of course, it seems unlikely ESPN will try and enforce this to the letter of what they’ve written here. Still, if they do, it may lead to conflict with some of their talent.

Beyond that, though, it feels like there’s an unfair standard here for those involved in news reporting or enterprise coverage. ESPN’s desire to keep its news pieces from seeming politically biased is understandable, and it makes some sense (for ESPN and traditional outlets, at least, not for all outlets) to avoid a reporter working on a piece expressing their own views about the subject and seemingly tainting the results. However, banning everyone involved in any sort of news reporting from expressing political opinions on anything doesn’t seem reasonable.

For example, it doesn’t seem particularly fair to say that Jemele Hill, Mike Wise or Rachel Nichols can share political opinions on their Twitter feeds, but the likes of Adam Schefter or Ed Werder (involved with hard news NFL reporting) can’t. Yes, if Schefter was both reporting and editorializing on something like public funding for NFL stadiums or a Congressional investigation of the NFL, that might pose problems, but why does it matter if he says something positive or negative about another area of politics (involving sports or not)? (He isn’t going to, as he’s talked about how he wants to stick only to sports, but what about other ESPN reporters?) Or why can’t someone like Bob Ley or Jeremy Schaap (involved with investigative and enterprise assignments) share political views on Twitter on something not related to their reporting?

The line of what’s “hard news” may be an interesting one, too. The likes of Hill, Wise, Nichols, Sage Steele and Howard Bryant (to pick out just a few of the many ESPN personalities who have at least been occasionally political on social media) are all involved with reporting in one form or another (Hill least of that group today, but she’s reported for ESPN in the past, and they’ve talked about having her and Michael Smith handle breaking news stories on the 6 p.m. SportsCenter if they come up), so does that make them banned from expressing political opinions? Or, because their platforms also include commentary, do they fall into the commentary group? And it’s also going to be tough to define just what qualifies as a political opinion and what’s a sports opinion, as those lines get awfully blurry these days too.

If ESPN sticks with the larger principle of common sense, they’ll probably be just fine. Despite the move to more and more political commentary from ESPN talent, there hasn’t really been anything that’s been a huge problem for the ESPN brand since Curt Schilling was fired over an anti-trans Facebook post.  And these new guidelines at least come closer to the reality of intersecting sports and politics in 2017, and try to present tips for how to best address it rather than trying to ignore it. As on-TV or on-radio tips, too, they probably work pretty well.

The material in here about those involved with “hard news” and restrictions for employees’ Twitter feeds could cause problems if ESPN actually tries to enforce it, though. We’ll see where they go with these new guidelines. If they stick with common sense, they’ll probably be fine. However, if they try to bring in the letter of this policy and apply it to every ESPN employee’s social media use, they may be in for some fights.