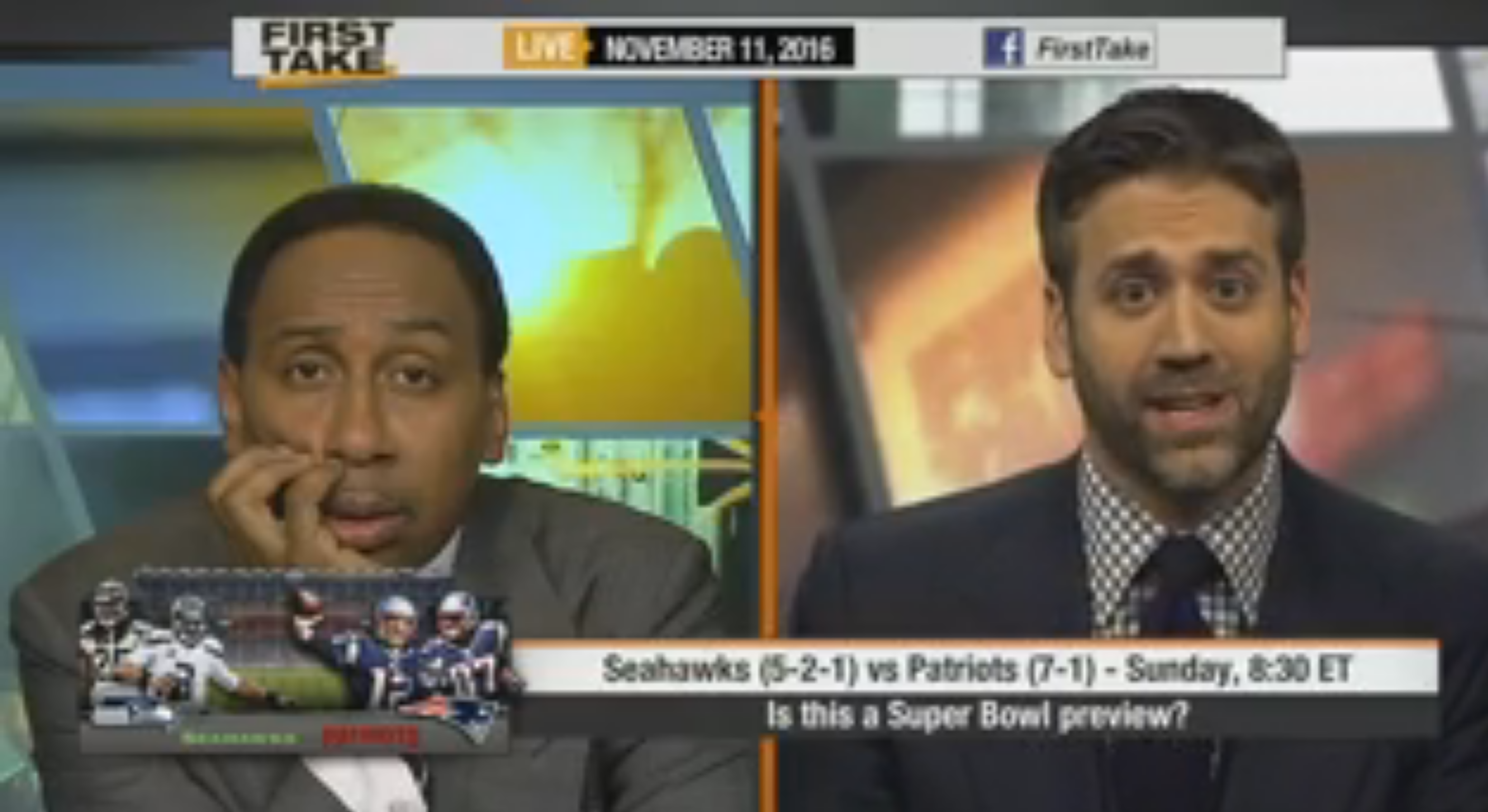 Stephen A. Smith has not been shy about the role he played in pushing Max Kellerman off of First Take.

Kellerman left the ESPN morning program last August and it wasn’t long after that reports started trickling out about Smith’s desire to make things more of a “him against the world” setup. In a rare instance of behind-the-scenes media beef going public, Smith candidly admitted this was very much the case a month later.

“The rumors are accurate in terms of me wanting him off the show,” Smith told radio hosts Ebro Darden and Peter Rosenberg. “Let’s get that out the way. Yes, I did (want him off the show).”

“It wasn’t really about asking him to be off the show, it was about the fact that I knew that we, together, as far as I was concerned, was not a great partnership anymore and that was something that needed to change.”

“We don’t have a bad relationship. I think he’s a real good guy. I appreciate what he did for the show. We were number one for five years. We stayed number one, and I appreciate that.”

Since then, First Take has indeed become a series of very loud people rotating in and out to debate Smith about the sports topics of the day, including Michael Irvin, Tim Tebow, J.J. Redick, and most recently, Chris “Mad Dog” Russo.

Russo and Smith have had some particularly spirited debates in recent weeks, as you’d expect.

Stephen A Smith and Chris “Mad Dog” Russo were losing it ? pic.twitter.com/OBLyaL3dmc

Along with their standing Wednesday appointment on television, the duo also met up on the radio airwaves Thursday when Smith stopped by Russo’s SiriusXM Radio show. Naturally, the discussion veered towards First Take, how the show works, who decides which person sits across from Smith, and whether or not letting Kellerman go has proven the right call.

“For me personally, the second that [Skip Bayless] left I needed to find a replacement. I didn’t think the rotating thing would work at that particular moment in time,” said Smith. “Because Skip and I had so ingratiated ourselves with an audience. That the audience was looking for a definitive partner to replace Skip. And so because of that, I felt like Max Kellerman was the right guy for the job. He worked within the walls of ESPN. He knew the culture. He knows the business. Highly, highly intelligent. Works hard. Cares. Etc., etc., etc. So because of that, I thought I knew that was the right man for the job at that particular moment in time. The bosses knew so as well. They recommended Max as well and I wasn’t gonna go against the bosses on that one because I had no trepidation whatsoever about Max.”

Russo asked Smith if he makes the call as to who the co-hosts are or if “the bosses” make the call.

“It’s a combination from the standpoint that I have input,” said Smith. “Especially now in this point in my career, if I say that I want a particular person for a show, they definitely take it very, very seriously. But the final call is not mine. I work for ESPN, it’s not the other way around. [ESPN Senior Vice President] Dave Roberts is my boss. [ESPN Executive Vice President] Norby Williamson is my boss. [ESPN Chairman] Jimmy Pitaro is my boss. So I always laugh, especially in the recent months and in the aftermath of me signing my contract, that people talk about how much power I have and all this other stuff. I’ve often laughed at that notion. It’s not to say that I don’t have any influence but by influence, it means I have their ear.”

As far as Kellerman and how everything went down, Smith maintained

“I’ve been on the record and we know my position about that. I just think that a lot of people tried to misconstrue it when so much was reported about…you know, I was very, very honest about me saying that I thought the show needed to change. But what I also said to the bosses was, ‘Listen, I think our time together has passed.’ If you want to keep him on the show and not me, and you want me to do something else…so be it.’ But in the end, I knew that it was time for us to part ways.

“We had been together for five years. I’ve been doing this for ten years. I got a feeling as to when something is going a bit stale and the audience doesn’t seem to gravitate to us in the fashion that they used to. So when I looked at him, I said the guy is smart as hell. He’s done radio. He’s done television. I know that he’s gonna be on his feet. There’s no way on Earth that he’s gonna be screwed over on anything like that. He’s an incredibly good guy. Very thoughtful. Good person. And I think he’s doing great things now.

I think I’ve been proven to be right. I think First Take needed a fresh start. That has been proven. I also predicted that he would be incredibly successful, which he has been. And so knowing that, it was just a matter of, as it pertains to he and I, there comes a point in time where you can just sense it, you can just feel it, where this run needs to end and that’s where I was.

In terms of whether or not Smith and Kellerman are on good terms, Smith wouldn’t say that, preferring to say that they are on no terms and alluding to the fact that there might possibly be some hard feelings, even if they remain in the professional realm.

You can listen to the snippet from their discussion here.