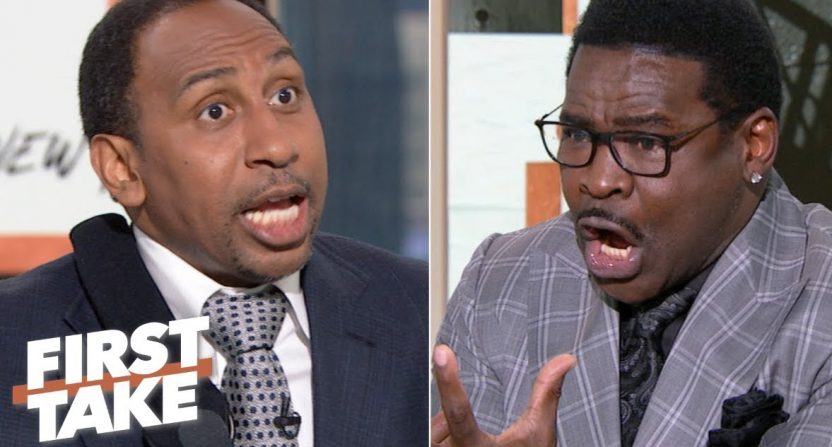 After Max Kellerman’s departure (rumored to be at the behest of Stephen A. Smith) and a few weeks of Michael Irvin speculation, ESPN announced their revamped format for First Take.

Debuting September 6th, the morning debate show will now feature a rotating cast of debate partners for Stephen A., who will continue in his role, as will Molly Qerim Rose. In addition to the rotating group, Michael Irvin will have a fixed slot on Monday mornings, while SEC Network analyst Tim Tebow will have that same role on Friday shows.

Pro Football Hall of Famer and NFL Network analyst Michael Irvin – who has gone head-to-head with Smith in countless unforgettable moments – will start each week of First Take, beginning Sept. 6 and after every NFL Sunday, joining Smith and Qerim Rose for the full two-hour show on Mondays. He and Smith will debate the week’s key on-the-field moments and under-the-radar stories, while also providing fans with insider news and can’t-miss analysis heading into that week’s Monday Night Football matchup and week ahead.

Each week will culminate on Friday with Heisman Trophy Winner and SEC Network analyst Tim Tebow and Smith debating all things college football heading into Saturdays throughout the season. In addition, First Take will also continue to regularly welcome signature celebrity guests from across sports and entertainment to the show.

According to the release, the changes are designed to keep things fresh throughout the week:

“This new format will pair Smith with new voices and perspectives every day of the week who will challenge him on their specific area of expertise in a completely new way,” said Antoine Lewis, senior coordinating producer, First Take. “Stephen A., Molly and a lineup of A-list guests will definitely continue to provide fans with all they’ve come to expect from First Take and much more. We’re excited to get going!”

It’s debatable how much any change could make First Take appealing to viewers who don’t already watch the show. Morning sports debate is sort of just what it is at this point. That said, from a synergy standpoint, the moves certainly make sense. Going with Tebow on Friday to set up Saturday’s college football (in which ESPN is obviously heavily invested) and some NFL talk is an obvious move.

Then, having Irvin on Monday to recap NFL Sunday action and presumably preview ESPN’s Monday Night Football matchup also fits with that strategy, at least through football season. For the rest of the week, rotating in different partners and voices emulates shows like Around the Horn in an effort to prevent staleness and repetition that can naturally occur when the same two people are endlessly arguing with each other.

If you’re determined to keep First Take on the air, these are the kinds of changes that probably have to happen.