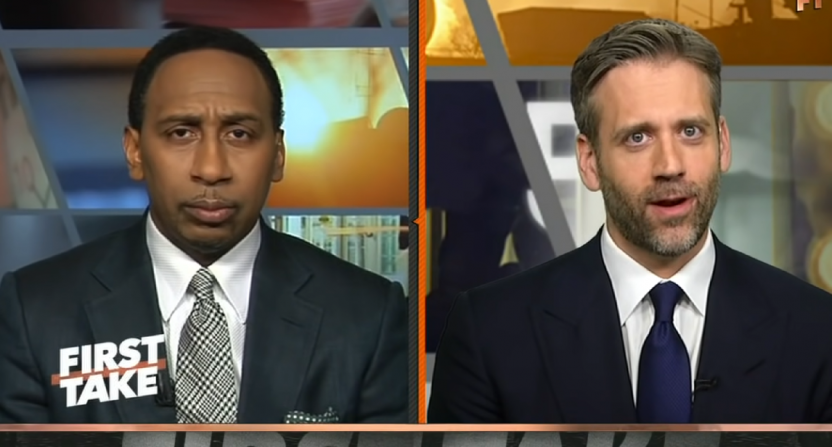 Stephen A. Smith has been remarkably open as to why Max Kellerman is no longer his First Take cohost: Smith wanted a change.

That became news very quickly, of course, which is what you’d expect when one of the most recognizable people at ESPN forces a change to a long-running program. Kellerman is now hosting This Just In, along with ESPN Radio duties, and Smith has been consistent in saying that one of the reasons he was comfortable pushing for the change was that Kellerman would have landing spots within ESPN.

He said that on Hot 97 a few weeks ago, and on the SI Media Podcast he told Jimmy Traina the same thing.

Stephen A. Smith couldn't have been more open and honest on this week's SI MEDIA PODCAST as you will see in this clip. Full show here: https://t.co/xB8VRjJbFB pic.twitter.com/mLaf718REw

The quotes are consistent enough that we’ll just use the Hot 97 version, as transcribed by OregonLive:

“The rumors are accurate in terms of me wanting him off the show,” Smith told radio hosts Ebro Darden and Peter Rosenberg. “Let’s get that out the way. Yes, I did (want him off the show).”

“It wasn’t really about asking him to be off the show, it was about the fact that I knew that we, together, as far as I was concerned, was not a great partnership anymore and that was something that needed to change.”

“We don’t have a bad relationship. I think he’s a real good guy. I appreciate what he did for the show. We were number one for five years. We stayed number one, and I appreciate that.”

The SI podcast is worth listening to as well for a few fun stories, including the time Kobe demanded a phone call while Smith was still on the air to tell him off for something Bryant hadn’t cared for. Smith also says the rotating cohosts on First Take might stay if the ratings support it, and if not the show might go with someone who distinguishes themselves during the process.

There’s also a brief foray into how Smith doesn’t really care for the entire industry of media covering other media, so, yeah, he probably won’t care too much for this post.

In the end, though, with Kellerman settling in to other roles and Smith focusing on the new-look First Take, hopefully both of them can move on from it. If anything, Smith being so transparent about it has helped alleviate any wilder speculation, which should help that process.