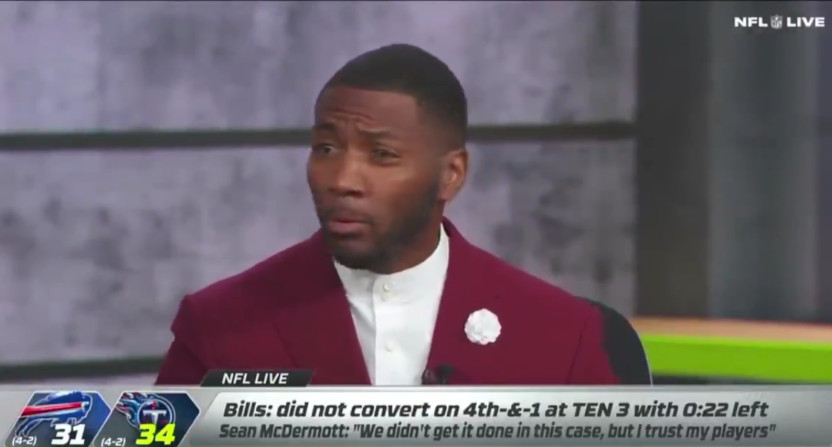 There’s been a lot of mockery of Chris Broussard over the years, from his repeated “Sources” missteps to “the biggest f***ing fraud in the history of sports media” and “what does it say about you that the only news you made during the entire NBA free agent process was getting called out on your bullshit by a foreign sports anchor?” The latest came Tuesday on FS1’s First Things First (where Broussard has been a co-host since August, alongside Nick Wright, Kevin Wildes, and Jenna Wolfe) when Broussard cited an injury to Taylor Lewan for why the Buffalo Bills failed on a fourth-and-one running play Monday night; Lewan plays for the Tennessee Titans, the Bills’ opponent in that game.  And this led to hilarious mockery from ESPN NFL analyst Ryan Clark on ESPN’s NFL Live Tuesday afternoon:

“I believe in the Buffalo Bills. I believe we can make this cake, I believe that we can win. Now, if you listen to a lot of the experts that have spoken today, many people would say Taylor Lewan’s injury had a lot to do with the fact that they weren’t able to convert a fourth down.”

That is some strong shade from Clark, a person who actually follows the NFL and knows what he’s talking about with it, against Broussard, who doesn’t meet either of those qualifications. And part of what’s so funny about Broussard’s error is that it’s not like it came in response to something, or it came with an immediate reaction to something that just happened. No, a man who had a whole night to prepare for this morning show decided to himself raise the point of an injury to the Titans’ left tackle (and there wasn’t a similar injury on the Bills’ offensive line) as a reason for a Bills’ fourth-and-one failure. So he thoroughly deserves this kind of mockery.

And this is maybe even better when it comes without even a citation of Broussard by name. Sure, this might have felt weird for those watching who weren’t already aware of Broussard’s mistake. But at least this didn’t provide any further promotion for Broussard, or for First Things First, a show where “knowing who plays for what team” is apparently not a prerequisite to being a co-host who comments on particular games.

Mistakes of course do happen, and they happen on other studio shows as well (consider ESPN’s Stephen A. Smith’s 2018 matchup preview of the injured Hunter Henry against the unemployed Derrick Johnson). But this was a particularly odious one from Broussard, and one that was a further blow to his already-scant credibility, and a further indication of why he shouldn’t be given a national TV platform to talk about the NFL. So it’s nice to see Clark bashing him without even mentioning his name.