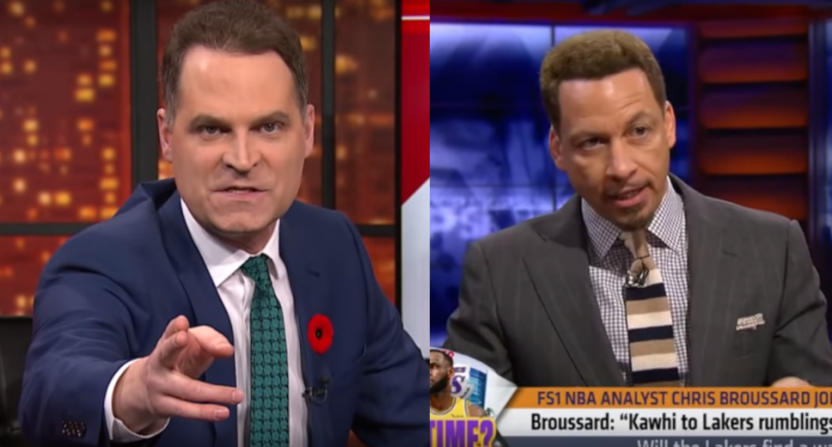 TSN SportsCentre anchor Jay Onrait has again gone in on Fox Sports’ Chris Broussard (a brief former colleague of his at FS1 in 2016-17). Two weeks ago, Onrait criticized much of the incorrect reporting around Kawhi Leonard’s free agency destination, with a particular focus on “the biggest fucking fraud in sports media” Broussard (who said on-air Leonard wasn’t going to the Clippers two days before Leonard went to the Clippers, part of his long history of getting reports wrong).

Broussard eventually responded Friday with a bunch of insults claiming Onrait was minor-league and didn’t have the stature to criticize him, comparing himself to Portland Trail Blazers’ star Damian Lillard in the process. And Onrait has now responded again. His response comes in a three-minute intro to the latest Jay and Dan Podcast, which both acknowledges the absurdity of this feud and gets some more deserved shots in at Broussard:

Here’s a transcription of the Broussard part of this, which also comes with some amazing soft piano background music:

“Hey buddy! Heard what you said about me calling you a fraud, and you’re right, I’m not perfect. I literally started the dumbest sports media feud in history. I guess all I can say is ‘That clapback took you two weeks? Who are you, George Costanza?’ You know what else you could have been doing the past two weeks? NBA reporting! I mean, come on, man, I put it on a tee for you! NBA free agency was happening, break a few trades, announce a few signings, put me in my place. It did not happen. You literally proved me right.”

“While you were Googling my name, coming up with killer double-A ball jokes, Woj, Shams, Haynes, and pretty much everyone was actually getting scoops! I mean, they still would have gotten those scoops, but wouldn’t you want to at least make an effort? Chris, at this point, if you actually had legitimate news and tweeted it out, would anyone believe you, or would they wait for that Woj or Shams tweet to confirm it? I think we both know the answer.”

“I mean, what does it say about you that the only news you made during the entire NBA free agent process was getting called out on your bullshit by a foreign sports anchor? You’re certainly qualified; you listed about a dozen reputable places you used to work for. But the cherry on top was comparing yourself to Damian Lillard. Damian Lillard! Which I agree with, because when you tweeted that the Clippers were out of the Kawhi sweepstakes and two days later, Kawhi agreed to sign with the Clippers, that was like watching Dame himself take the three-pointer to beat the Thunder in Game 5.”

“Ah, we’ve had some fun. I sincerely apologize for even mentioning you, Chris. This is literally the dumbest thing I’ve ever been a part of in this business, and I wrote two best-selling books about shitting my pants. Maybe we should look on the bright side. In the summer of 2019, for three days, you and I entertained the 13 or 14 people in our business who are not on vacation.”

“Feel free to clap back again and again. Like the rest of the sports world, I won’t be listening to you. But if you are going to call more Canadians soft on the next Pusha-C diss track, here are some for you. Joni Mitchell. Neil Young. And of course, Anne Murray, who has it coming. The list is endless. Just use your Google machine.”

“I wish you the best of luck, Chris. Talk to you again in 10 years when we are interviewed for the oral history of the dumbest feud in sports media history. Peace.”

This response is a good illustration of Onrait’s larger point that Broussard is completely unreliable as a reporter, and he’s absolutely correct there, especially when it comes to “Chris, at this point, if you actually had legitimate news and tweeted it out, would anyone believe you, or would they wait for that Woj or Shams tweet to confirm it? I think we both know the answer.”

It would be extremely hard to take any report from Broussard seriously at this point, as he has no recent history of getting anything first, and plenty of history of getting things wrong. And while Broussard sometimes claims he’s an analyst rather than a reporter these days, he still talks on air and on Twitter like he’s reporting, which leads to hilarious situations such as his claims of “Clippers out,” “Barring a last-second change of heart, Kawhi will be a Laker” ,”I believe he’ll end up with the Lakers” (as part of a long segment featuring Broussard reporting on calls from Leonard’s camp to Magic Johnson), and maybe the best one, “Kawhi will go to Lakers & it’s his best chance to win titles” only one day before Leonard chose the Clippers.

When you see things like that, it makes it even harder to take Broussard seriously, especially when you add that to his dismal reporting history. And that lack of reporting credibility is something Broussard didn’t particularly address in his own response to Onrait, which instead focused on trying to big-time him. And that’s hilarious considering that Broussard works for little-watched FS1 and doesn’t even have his own show there; he has a Fox Sports Radio show and he appears on FS1’s studio shows, but Onrait’s a fixture on TSN’s well-watched SportsCentre, so it’s possible that Onrait’s work is regularly seen by more viewers despite Canada having just over a 10th of the U.S.’s population. It’s tough to track down specific ratings for Canadian SportsCentre (especially only the ones with Onrait and Dan O’Toole), but TSN parent Bell wrote in December that there were 1.4 billion hours of SportsCentre consumed in 2018, so yeah, Onrait seems to be doing just fine. And someone who’s primarily a guest on FS1 studio shows probably shouldn’t be calling anyone else minor-league.

At any rate, that’s probably all for this feud for a while, unless Broussard comes across this two weeks from now and decides to shoot back again. But while Onrait’s correct that it was a dumb feud, it was also a highly-entertaining one. And it provided much of the sports world with further reasons to dunk on Broussard, and further reasons to be skeptical of anything he says.

[The Jay and Dan Podcast on Stitcher]