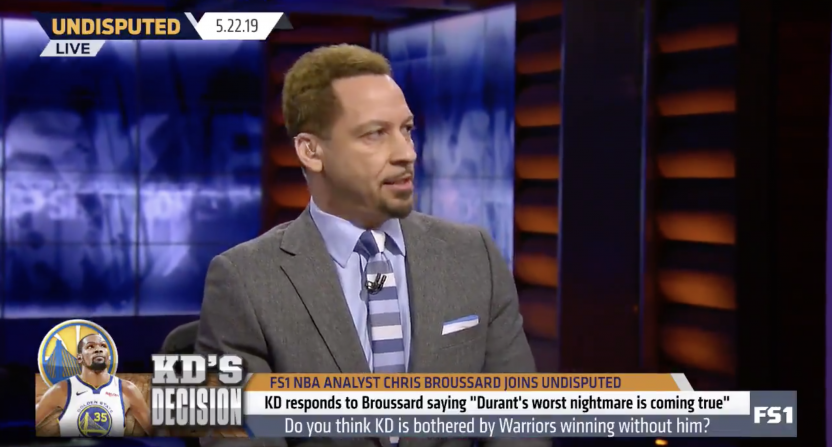 Chris Broussard has been in the news lately for the usual reason: getting something very wrong. In this case, it was the Kawhi Leonard saga, which involved Broussard saying on various occasions and across different platforms that the Clippers were out.

I’ve heard Kawhi is Laker-bound. Person close to him told me today that no decision has been made…we wait… https://t.co/9irvC99Knp

Last week, Jay Onrait went after Broussard with a lengthy, expletive-laden rant, calling him the “biggest fucking fraud in the history of sports media”, among other things.

“I don’t know why that would be, I don’t know why they would want that. To save face, I guess? What good would it do them to feed them misinformation, right? Kawhi’s so secretive, everyone knows he’s secretive, no one’s expecting any information to come out from him. So I just have to assume that everyone was fucking lying! Everyone knew nothing, nothing! And they were saying that they knew everything!

Chris Broussard, who worked at Fox and is the biggest fucking fraud in the history of sports media, ever, ESPN kicked him out, Fox kicked him out, I don’t know what he’s doing now (editorial note: Broussard is still at Fox, appearing on their FS1 studio shows as a “FS1 NBA Analyst” and co-hosting The Odd Couple on Fox Sports Radio with Rob Parker), saying that the Clippers were out of it for sure and it was down to the Lakers and Raptors, he knew nothing! They knew nothing! It’s all bullshit!”

Broussard was a guest on Pardon My Take in which he responded thusly:

“I had to Google Jay first. Real talk. I didn’t know who it was. And then I laughed, because to me, it was like someone in the G League criticizing Damian Lillard. Jay Onrait, as my partner Rob Parker would say, he had a cup of coffee and a sweet roll in the majors. He was on Fox Sports 1 four years, and he got demoted back to AA ball. He went from the NFL to arena football. He went from the NBA to the G League.

“I’m like, get in the majors and stick before you criticize me. Real talk. I’ve been in the majors for over 20 years. I worked at the New York Times for six years. Won awards for my coverage of the New York Knicks. Went to ESPN the Magazine and wrote for 12 years. Won awards for feature stories I wrote there. Morphed into television and radio, and I’ve never been fired, never had my contract not be renewed. I’m in the majors. I’ve been here for more than two decades. You spent four years and got demoted. You’re criticizing me? My career cannot be defined by breaking transactions, or missing out on transactions, making a few mistakes on transactions.

“The irony is that Jay Onrait, in trying to critique me for getting something wrong, he got two things wrong. He said ESPN kicked me out. ESPN didn’t kick me out. ESPN offered me a multi-year contract and was surprised when I turned it down and went to Fox. He said Fox kicked me out. I’m still at Fox. In fact, Fox kicked him out! Fox did not renew his contract.

“I think his ire with me stems from two things. One, bitterness that Fox Sports 1 didn’t bring him back. And 2, during the playoffs, I called Canada soft. I said Canada is soft, the Raptors are soft, and Drake is soft. I apologize. Canada is not soft. Drake is not soft. The Raptors are not soft. Jay Onrait is soft.”

You can listen to that quote and the rest of the Broussard interview here, starting at 38:40.

Broussard is apparently leaning into the idea that because he doesn’t try to pass himself off as a newsbreaker anymore (he’s an “opinionist”) that means he can speculate wildly and be wrong with impunity. He’s also glossing over his extensive history of being wrong, while framing his own career trajectory in much more positive terms than anyone else really would, unless Damian Lillard has also gone from being on the sidelines during NBA playoff games to hosting a radio show and we just don’t know it yet.

This feud still pretty clearly tilts in Onrait’s favor on the judge’s scorecards.