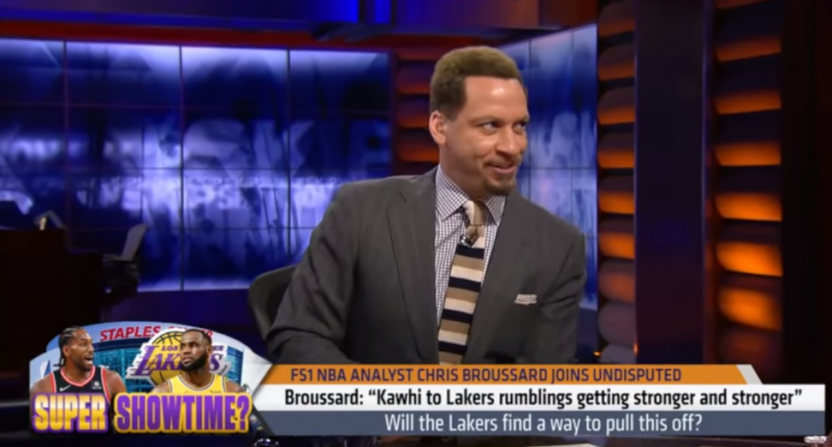 Kawhi Leonard’s free agency move to the Los Angeles Clippers saw a whole lot of sports media people proven incredibly wrong, with only Adrian Wojnarowski and Chris Haynes coming out of the reporting on it without looking too bad. Wojnarowski indicated early on Leonard was leaning towards the Clippers, then kept pretty quiet on Leonard until the move happened, while Haynes said regularly Leonard was still thinking over his options and cited the Clippers as one of those, and was eventually one of the first to report Leonard signing with the Clippers (alongside Fox’s Cris Carter, who also got parts of this right throughout but had some missteps as well, including “I believe this a two team race, Lakers and Raptors“).

That’s in contrast to a lot of reports and takes from the likes of Chris Broussard, Jalen Rose and others that wound up looking real bad in hindsight, and TSN’s Jay Onrait weighed in on that in the latest episode of The Jay and Dan Podcast, going off on the reporting and punditry around the Leonard situation (starting around 10:20 here) and blasting some former Fox colleagues (in particular, Broussard) along the way:

“I sent a tweet to the effect of ‘What’s amazing is no one knew anything.’ Everybody, and I love Jalen Rose, I love him, Cris Carter, he was nothing but nice to us at Fox. But these guys were all full of shit! Or at the very least, they were being used, they were being manipulated by someone within Kawhi’s camp to get information out there.”

“I don’t know why that would be, I don’t know why they would want that. To save face, I guess? What good would it do them to feed them misinformation, right? Kawhi’s so secretive, everyone knows he’s secretive, no one’s expecting any information to come out from him. So I just have to assume that everyone was fucking lying! Everyone knew nothing, nothing! And they were saying that they knew everything! Chris Broussard, who worked at Fox and is the biggest fucking fraud in the history of sports media, ever, ESPN kicked him out, Fox kicked him out, I don’t know what he’s doing now (editorial note: Broussard is still at Fox, appearing on their FS1 studio shows as a “FS1 NBA Analyst” and co-hosting The Odd Couple on Fox Sports Radio with Rob Parker), saying that the Clippers were out of it for sure and it was down to the Lakers and Raptors, he knew nothing! They knew nothing! It’s all bullshit!”

“And I know it’s all bullshit. I get it. All those shows in the daytime, First Take, and again, I like all those people personally, I like them all, and I understand why they’re doing those shows. It works, it gets numbers, people like them, it’s entertaining. I’m not criticizing that side of it. I’m just saying if anyone in the history of the world takes anything the daytime guys say seriously, and I’m including Stephen A. [Smith] in this, I know Stephen A. has a lot of connections, but he said a lot of stuff that’s completely 100 percent fucking false…if anyone tells me ‘Stephen A. said something’ or ‘Max Kellerman said something,’ no! It’s all bullshit! No one knows anything! And they should have known that Kawhi was the kind of person that this would backfire on them about!”

(Note: the swearing there is actually bleeped on the podcast.)

Those are some strong criticisms from Onrait, especially when it comes to Broussard. But there’s a mountain of evidence to back him up. Broussard’s shady “reporting” has been taking heat for most of the last decade, especially when it comes to his sources. While at ESPN in July 2012, he cited a “source” for a Deron Williams move that Williams had already tweeted, and claimed a quote from Eric Gordon was “exclusive” when it was from an already-public statement jointly provided to him and the Arizona Republic, then tried to defend those moves in spectacularly inept fashion. to then-ESPN ombudsman The Poynter Institute.

Since then, Broussard took heat for calling homosexuality “a sin” and “rebellion against God” in an April 2013 Outside The Lines appearance (in response to Jason Collins becoming the first active NBA player to come out as gay), again drawing ombudsman fire. Then in May 2014, Broussard returned to shitty reporting from the realm of shitty takes, claiming “sources” for the Cavs’ firing of Mike Brown (reported by everyone else 15 minutes earlier), and then July saw him again saying “source confirms” about LeBron James’ return to Cleveland (which James had previously made public himself in a Sports Illustrated story).

And that’s far from the end with Broussard. July 2015 saw him back with the bad takes, this time trying to argue against premarital sex and claim criticism of until-marriage chastity was intolerant, but he quickly returned to bad reporting around the DeAndre Jordan saga, claiming that Mark Cuban was “driving around Dallas” (later corrected to Houston, where Cuban actually was) trying to get Jordan’s address. That prompted criticism from both Cuban’s brother Brian and Cuban himself, who tweeted “That’s is the dumbest shit Ive ever heard. If u had any ethics you would msg me and I would give you his address” and later said “I have the facts. u got lied to.” Cuban then asked Broussard to post proof of his claims and said he’d donate $100,000 to a charity of Broussard’s choice; Broussard didn’t respond to that until days later, but eventually apologized with a statement. Broussard was then again spectacularly wrong about a Tristan Thompson contract extension that September, and Cuban came up with an incredible burn of him that November:

Mark Cuban on misreporting about DeAndre Jordan: "You mean Chris Broussard? He's an idiot. I take that back. My sources say he's an idiot."

After one final giant controversy at ESPN (centering around tweeting a screengrab of a newspaper photo with no credit), Broussard then wound up at Fox in November 2016 (despite a month of criticism following the initial report that they were looking to hire him). And fortunately, they’ve mostly used him as a “NBA analyst” and a radio host rather than as a reporter, so he hasn’t fallen on his face quite as frequently on the reporting side as he did at ESPN. But he’s still managed to be a terrible pundit, feuding with Kevin Durant, claiming the first 16-over-1 win in the NCAA tournament wasn’t that tournament’s biggest upset, and calling Canada “soft.”

And when Broussard does still dive into reporting, it’s often with bad results. One particular case comes to mind from 2017, where he passed along anonymous sources claiming Isaiah Thomas had a “Napoleon complex” and was disliked by Boston teammates, only to be publicly refuted by some of Thomas’ teammates. So the Leonard situation is just the latest example of a very public reporting misstep from Broussard, and there’s some merit to Onrait’s criticism of him.

Onrait’s comments here on daytime talk shows in general are also notable, and yeah, there are good reasons not to take much of what’s said there (whether on FS1 or ESPN) seriously. Here are a few examples of the many, many wrong comments on Leonard on those shows:

But it’s Onrait’s comments on Broussard that are particularly pointed, and there’s a point to them. Any sort of examination of Broussard’s reporting and takes over the last decade suggests he and his “sources” aren’t to be relied upon. And yet, Fox still finds it worthwhile to not only employ him, but to give him a platform where he can confidently say things like “I’ve heard Kawhi is Laker-bound,” “Barring a last-second change of heart, Kawhi Leonard will be a Los Angeles Laker,” “Kawhi will go to Lakers,” “My answer is the Los Angeles Lakers,” and “Clippers out.” (Broussard tried to defend that last one days later by claiming it was accurate at the time, but yeah, no.) Broussard’s record stands for itself, and illustrates his lack of credibility. And FS1 continuing to give him airtime despite that says a lot about their own credibility.

[The Jay and Dan Podcast at TSN]