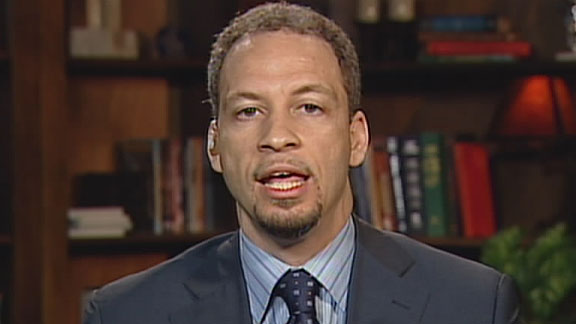 ESPN has done a lot to clean up their questionable reporting habits in recent months.  And while it’s not a perfect system, at least there’s more effort to give public credit to other reporters and outlets.

And then there’s Chris Broussard.

Chris Broussard’s Sources have a reputation of being a bit behind the curve with relation to other real NBA reporters and occupying a world of their own.  That was proven true once again with the news that the Cleveland Cavaliers fired head coach Mike Brown.  Again.

NBA reporters and pretty much everyone else all tweeted out the news that the franchise had announced Brown’s firing and the hiring of David Griffin as GM.

Quite the bombshell press release from Cavs: David Griffin named GM, and coach Mike Brown is out

You’ll notice a common theme in those tweets.  All of them come from around the same time on Monday when the Cavs announced the moves publicly.  Look, here’s the press release.

And then there’s Chris Broussard.

The amazing thing about this is it’s really the same exact thing we saw back in 2012 when Broussard had egg on his face over his late reporting of Deron Williams joining the Nets.  Back then he went forward with a report based on his sources in spite of it already being public knowledge.  He did the same thing on Monday.  Chris Broussard was the only reporter who needed his sources to report something that was widely disseminated in a press release.  According to my own sources, that’s just funny.

Who knows what happened with Chris Broussard’s Sources this time.  Maybe he’s still off operating in his own world and just doesn’t read anyone or anything else in the basketball media.  Maybe there’s a “sources” bonus in his contract.  Maybe there’s a reasonable explanation.  Regardless, even the acknowledgement that the information was already out there publicly would be enough to push back the armada of individuals scoffing at his sources.

However, the impression being given once again is that Broussard opened Twitter, saw everyone tweeting about Mike Brown’s firing and then fired off his “report” to try and get credit for this “scoop.”  It’d be like watching the end of the Heat-Nets game Monday night and firing off this tweet 10 minutes later: “Sources: Heat beat Nets in Game 4.”

That’s not a good look for Broussard or ESPN.  It takes us back to a time when ESPN admitted to using Jay Glazer and everyone else as their “sources.”  It takes us back to a time where you couldn’t trust what ESPN was reporting because there was a good possibility they were just unethically stealing stories from other outlets.  Sure, Chris Broussard’s Sources are easy to poke fun at, but it also represents why ESPN’s questionable reporting practices over the years hurt their brand in a significant way.