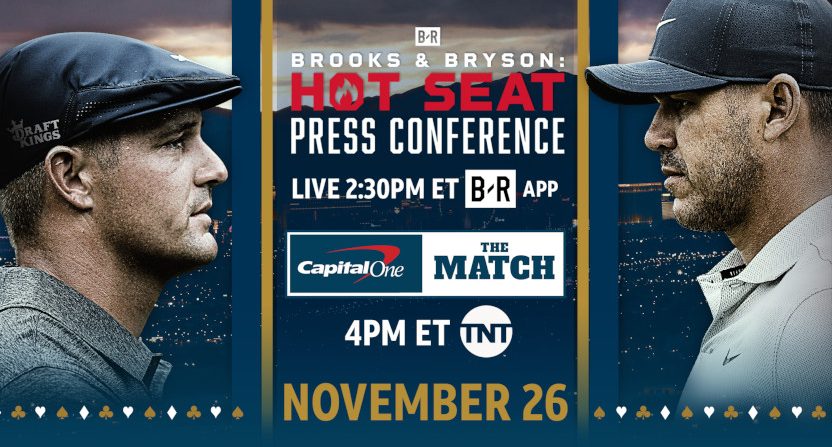 A notable trend over the past few years has been various ways to try and give fans closer access to sports figures, including around press conferences. This year in particular, some audio efforts with Clubhouse and Twitter Spaces have incorporated fan participation into events of the sort previously targeted at credentialed media alone. The latest effort to really dial up the fan participation, specifically around a press conference, comes from Bleacher Report around their coverage of the Nov. 26 edition of The Match featuring Brooks Koepka and Bryson DeChambeau.

B/R announced Thursday that they’ll provide a streaming pre-event show on their app, beginning at 2:30 p.m. ET on Nov. 26 (ahead of The Match at 4 p.m. ET that day on TNT). They did that at July’s last The Match as well with a “Range Battles” pre-show. But this one will be focused on a “press conference” of questions from fans and special guests. Here’s more from a release:

The rivalry between Bryson DeChambeau and Brooks Koepka will be on full display during Turner Sports’ next installment of Capital One’s The Match – its Sports Emmy-nominated premier live golf event series – but before Bryson and Brooks take to the course they will be asked the questions every fan wants answered during Bleacher Report’s Brooks & Bryson: Hot Seat Press Conference presented by Capital One.

Bleacher Report’s Brooks & Bryson: Hot Seat Press Conference will be hosted by comedians Country Club Adjacent and livestream exclusively on the B/R app Friday, Nov. 26. at 2:30 p.m. ET. The interactive Q&A will feature questions fielded from fans across B/R social channels and the B/R app along with those posed by a handful of special guests leading up to Capital One’s The Match at 4 p.m. ET on TNT.

In the days leading up to the event, B/R will prompt fans across its social channels to submit questions for the chance to have them read live during the press conference. Real-time questions submitted in the B/R app will also be raised during the livestream to take advantage of unexpected moments and answers. Fans whose questions are chosen will win exclusive custom hoodies and the chance for cash prizes.

There’s some potential appeal here, especially with Koepka and DeChambeau and their rivalry. A joint conference with them would be interesting enough in the first place. And while fan questions often vary widely in quality, there might be some notable ones here. The approach of having both pre-submitted questions and questions submitted during the event but read by the hosts also seems smart; that should allow for enough screening to incorporate the good questions without having this go off the rails. That’s particularly important with these two golfers, considering how Koepka’s fans’ trolling of DeChambeau has led to even tournament ejections in the past. Oh, and B/R posted a video of DeChambeau driving balls off a roof at a giant Koepka target:

.@b_dechambeau was hitting bombs off the roof at a giant @BKoepka target ?#CapitalOnesTheMatch is Friday, Nov. 26, at 4pm ET on TNT pic.twitter.com/uaWZZTTCrQ

This also stands out as another way where WarnerMedia is trying to build synergy between Bleacher Report and Turner Sports’ television coverage. There’s been quite a bit of that lately, including the new B/R “Open Ice” vertical around Turner’s NHL deal and last month’s combined event from B/R Gaming and TBS. And that makes a lot of sense for the company. We’ll see how those synergies develop over time, but it’s definitely notable to see B/R playing a larger role around some Turner Sports properties.