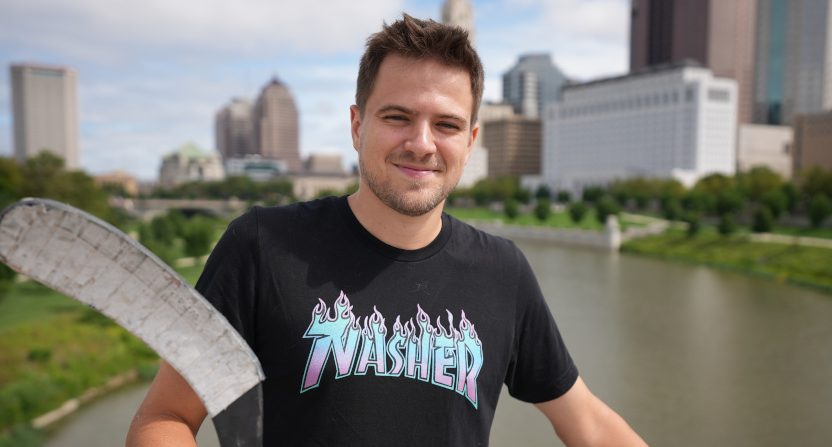 An interesting part of Turner Sports’ new NHL rights is the attention they’ve paid to Bleacher Report in this, including referencing the launch of a B/R Open Ice vertical and the hire of popular YouTube/social media content creator Andrew “Nasher” Telfer in their release on the NHL on TNT cast. We’ve seen success for B/R with specific verticals before, perhaps particularly including football site B/R Gridiron and esports site B/R Gaming, and it’s particularly notable here to see them launching a vertical for a sport at the same time their parent corporation has acquired rights to that sport. And Telfer told AA in an interview last week that he’s thrilled to get involved with B/R right at the start of their NHL vertical.

“It’s just such an exciting time. You see what B/R is doing in other sports, and it feels like they kind of get the youth and the culture behind the sport. With a lot of these NHL guys, not to speak badly of them, but they have kind of these dry personalities when it comes to interviews and when you see them. But I’ve had the chance to meet up with quite a few of them, even last week at the Chicago player media tour, and when you get the chance to get these guys talking and actually get to know them, these guys will shine on the big stage. I feel like Bleacher Report actually opens the door to letting that happen and gives me the opportunity to connect with these guys and really get to know them on a deeper level.”

Telfer said his plans there include livestreams of games, video appearances from NHL players, and lists and reactions with actual NHL footage.

“We’re still going through all the specific details, but we are planning quite a few shows. We’ll be doing livestreams, we’ll get NHL players involved. And we have access to the actual NHL rights when it comes to footage, so we have that at our disposal to do reactions, to do top plays. A lot’s still in the works and TBD, but there are big things on the rise.”

He said the rights aspect of the Turner/NHL deal made this particularly appealing for him.

“This is something that I’ve never had the chance to do. You kind of jump through these holes and try to figure out how to use content. Having access to an entire array of actual NHL content, being able to put together compilations of my favorite players, reactions, getting NHL players on the show and talking through these different events that transpire, I just feel like it opens so many doors that haven’t been there. And everything’s moving to digital and social media now, and it feels like this is a big opportunity to make that jump.”

Telfer started making hockey videos in 2012 with a focus on gaming and trick shots, then went more into actual hockey games by putting a GoPro on his helmet during games and uploading that footage. He said this is a further move up for him.

“My career has just been jumping from one thing to another, going bigger and better each time. I started out making gaming videos back in 2012, NHL gaming stuff. Gaming was good, but people really wanted to understand more what hockey was about. So I tossed the GoPro on my head to give people a raw, inside look at what the game of hockey is like, the good, the bad, the ugly, everything behind the scenes. And that’s when things really started to take off.”

He said he plans to keep a focus on showing off the sport, and he thinks there’s an opportunity there to draw in people who aren’t already hockey fans.

“I started doing general real-life hockey content. I’ll do news stuff, reporting on big trades that happen. I’ll keep the GoPro content going. But it was just really giving people a behind-the-scenes look at what hockey is. Because the reality is, hockey is a very expensive sport, it’s the toughest sport to get into. So people can just come here and see ‘Hey, you don’t have to rent an entire ice rink to play. You can just go outside and grab a stick, shoes, and a ball and get a big game going.’ It’s promoting every type of hockey, getting people that look, and hopefully getting them involved.”

Telfer said he’s amazed at what he’s been able to accomplish in the hockey world so far, and he thinks there’s more he can do still.

“It’s been crazy. It just feels like every single opportunity that I have, it’s just a step up in a huge way. It makes no sense that I’m mentioned in an article with Wayne Gretzky! And my fans who have been following me since I had just like 1,000 subscribers, making little hockey trick shots for fun, and now, to be where we are, I give it all to my fans and the support that they’ve given me. I wake up every day and get to do what I love every single day. And though I wasn’t good enough to make it to the NHL, this is absolutely the next best thing.”

Many of the people in the hockey scene are from markets that have long had NHL teams, but that’s not the case for Telfair. He’s from Columbus, Ohio, and he said it was particularly fun watching and following a new NHL team there as he was growing up.

“My parents got me into it at a pretty young age. I started playing when I was five. My dad wasn’t a hockey player by any means, intramurals in college was kind of the extent of his hockey experience. The timing worked out very well: I got started, I was born in 1994, and started in 1999, and then the Blue Jackets came to the scene in 2000 here in Columbus, and so my dad took me to the first-ever Blue Jackets’ game at Nationwide Arena when I was five years old. I grew to love the team and love the sport, and played through high school.”

He said while the Blue Jackets haven’t always found great success on the ice, they’ve done a lot to make hockey more prominent in that community.

“It’s been very cool to see. The team has gone through a lot of ups and downs, with Tortorella and changing the culture, but the city…it used to be that I would show up to the rink, there’s an outdoor rink five minutes away that I go skate at, and it used to be that we would have to manually send out a text to all our buddies to get together.”

“Now, it feels like you can show up on any given day and there’s people skating. We get groups of 20-plus people out there playing pickup hockey, and that shows the impact the Blue Jackets have had and the impact of the hockey community as a whole. I think we have one of the biggest beer leagues in the entire country in terms of all the different levels on the ice. It’s been very cool to see it blow up over the last few years.”

Telfer said his college days (at Ohio State) presented him with the choice of either continuing with hockey with the school’s club team or moving more into the content creation world. He chose the latter, and he said he’s happy he made that call.

“Once college came around, I was in kind of a tough spot; I thought about playing club college hockey, but it would have been a huge commitment and I wouldn’t have had time to do any of my YouTube stuff that I enjoyed doing, so I thought it was time to step back from hockey and focus on my YouTube channel, and fortunately it’s led to this, and that’s been great.”

YouTube is becoming a big focus for people around many sports, whether that’s with esports or with videos and analysis on the actual pro sport. Telfer said he follows many creators from other sports, and he tries to see what’s working for them.

“I like watching pretty much everything. I’ll try to catch different things and see how I can bring them into my content. In the Madden scene, there are a lot of different guys. MMG is one of my favorites, he’s just very creative. He kind of has a similar mindset to me; this is a video game, we want it to be fun, to be exciting, to show what the sport’s all about. But I think there’s great creatives in each of the sports, and we all kind of have our own unique things. I’m just trying to do my own here in the hockey scene.”

He said he’s excited about the hockey content creation scene, and he thinks it has a lot of potential to draw in people who aren’t already committed NHL fans.

“It’s getting a whole new audience. Most of my friends, outside of my hockey community, they’re not huge hockey fans right now, right? But you get them involved and you catch a couple of these crazy things that happen on a nightly basis, and it’s beautiful how quickly the average football fan, basketball fan converts over to hockey once they see what it’s all about.”