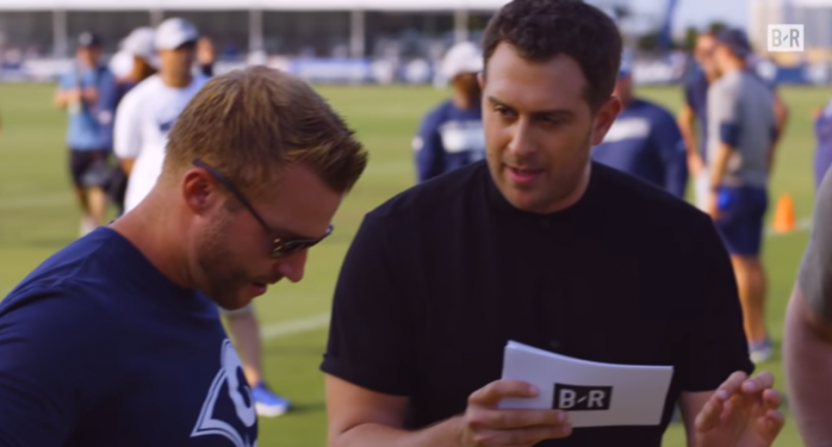 Bleacher Report is launching a new “B/R Gridiron” brand for its NFL and NCAA football coverage, which will include two all-new original video series, a Sunday gameday show focusing on betting, the return of their animated Gridiron Heights show, content from their top football writers and more. The video series are perhaps particularly interesting, Ditch The Playbook with Lefkoe (hosted by Adam Lefkoe) and Untold Stories (hosted by Master Tesfatsion).

Both of those series will be biweekly, with one or the other putting out a new episode every Wednesday. As per a Bleacher Report release, Untold Stories will see Tesfatsion “meet former NFL players to share a story that fans may think they know, but have never heard from the athlete’s perspective,” with those stories “brought to life with illustrations to help drive either the humor or drama of the situation.” Meanwhile, Ditch The Playbook will see Lefkoe “visit with NFL players on location for a fresh take on the standard interview format” that will “tap into the elite traits of today’s biggest stars” and “feature these world-class athletes doing what they do best, but in a way that the public has rarely seen.” This week, Lefkoe spoke to Awful Announcing about the new show and how he hopes for it to stand out, saying the goal is to show cool things top NFL players can do.

“It’s so much more doing than it is talking. We really tried to target a lot of players in the NFL around the country that were kind of known for something, or had done something on the field that was intriguing. And then we kind of wanted to investigate and then take it to the max. So it’s really, it’s an expansion on the interview show, talking is really not the priority at all.”

“So if we know that Travis Kelce is sort of a prankster, we want to see it to the fullest extent. We’ve seen Mohamed Sanu throw a 50-yard touchdown in a game, and it’s like ‘I wonder how many quarterbacks he has a stronger arm then?’ So it’s it’s a lot less diving into the personalities and who they are, it’s more ‘Let’s see what these guys are capable of and and have fun, but also show an audience something they’ve probably never seen before.'”

Lefkoe said NFL fans should tune in because of the uniqueness of the show, and because it’s trying to also create some changes.

“One, they’re going to see something they’ve never seen before, and I do think that’s that’s pretty awesome. Two, we’re trying to end every episode where where something really changes. I don’t want to give away too much, but with one, there’s going to be a change in Madden.”

He said he’s seen past success exploring unconventional ideas with NFL coverage, and he thinks there’s room for more of that, especially given the traditional way the NFL is often covered.

“One thing that we learned last year from Sean McVay when he was remembering plays (an interview seen above) or the Tarik Cohen Bear Mitzvah, the NFL is covered in a media landscape very traditionally. There are games, if you win, you’re having a great year, if you don’t, what’s wrong? And I think for me, I do a lot of work with Turner with the NBA, I did work with March Madness, I looked at the NFL and I thought ‘Why is the NFL not covered like the NBA? How can I NBAifiy the NFL?'”

“And the one thing that I found was lacking was there wasn’t really this personality-based programming. A lot of it was ‘Talk about your locker room,’ or ‘Talk about expectations.’ It’s more people that do phenomenal profiles. But the other thing was I wanted to show these guys in a different light. From my podcast, The Lefkoe Show, I’m always talking about it being a player’s podcast, I’ll always stand up for the Melvin Gordons and the Zekes [Ezekiel Elliott] and Le’Veon Bells to get their money. And so from a content creator standpoint, I wanted to be able to show that these guys can really be marketable off the field and have great personalities. I’m tired of interviewing these guys after they retire and they don’t know what to do; I want them to have a space where they can show their personalities.”

“Oh my gosh, yes. The amount of NFL players that will just, we’re working on a shoot and ask ‘How many people are going to be there?’ ‘Oh, it’s just me.’ That’s an NFL player; an NBA player is going to come with like four or five people. [NFL players] seem to be a lot more willing to try things and do things. And the amount of times now where I get done a shoot, and they look at me and they go ‘Man, that was a lot of fun, I’ve never done something like that,’ it’s so much more frequent.”

“And they’re a lot more accessible; I don’t want to say that NBA players are not accessible or tough to deal with, because NBA players are great a lot of times, they’re 25-, 26-year old kids, but the big thing too is the gap in money in terms of  a reporter salary to an NFL player’s a lot closer sometimes than to a NBA player. I find them to sometimes be a little bit more humble. A lot of these guys I’ve become friends with over recent years, where I’ll be working in events or I’ll cover them, or just through social media.”

He said he thinks there’s a rise in NFL players’ awareness of their ability to communicate with fans individually and show off their personalities, and he wants his show to be part of that.

“I think social media in the NFL is completely changed this year. We did a thing with the Lefkoe Show Instagram handle where we’ve done a lot of UGC, user-generated content. I would scour every NFL player’s Instagram feed, and I would see, you know, the Chicago Bears celebrating in their locker room, and we were one of the only accounts that was really putting that out last year. This year, I have seen a complete 180, where I’m seeing the big accounts like The Checkdown and NFL [doing that]. B/R Gridiron, that’s what everything’s really built off, trying to show Melvin Gordon at a camp or Tarik Cohen coming into the first day of practice. That wasn’t everywhere last year, and now it is; I think NFL players are starting to realize the kind of voice they have and it’s cool to help communicate that.”

In contrast to its coverage of the NBA or NCAA, Bleacher Report parent Turner doesn’t have rights to NFL games. But Lefkoe said that’s actually a bonus for the kind of coverage he wants to do.

“It feels very freeing. I read about all these other media people that can’t say anything because they don’t offend the league or they don’t want to upset partnerships or they don’t want to impact the economic flow of their company and the league. I see it as freeing. I think a lot of people from the outside, they go ‘Oh, you don’t have have rights, so you can’t show plays.’ And then me and my amazing producer sit around and go ‘Okay, well then the content that much better so that we don’t need to rely on plays.'”

“Having been at Bleacher Report for five and a half years and focusing on the NFL for a long time, it’s in my mind kind of made us a little bit more creative, because our content has to be much better because we can’t rely on that footage. And again, I don’t have to worry about the league being upset about maybe going in a direction with my podcast or this show they don’t like.”

Lefkoe said he enjoys working across a wide range of sports, but doing NFL coverage at Bleacher Report is particularly interesting because it gives him the chance to really own that area and stand out from the crowd.

“I love doing all the sports, I did golf, I did The Match with Tiger Woods and Phil Mickelson, so I love to be able to show versatility. And it’s also kind of cool to work at a huge company and I’m one of the few people talking about the biggest sport in America. So for me it’s an opportunity also to kind of own a lane and to own a niche while having the versatility to kind of do all the sports when needed.”

"Chase what you’re crazy about. The day will come when you’ll regret that you didn’t chase your crazy!"

"Chase what you’re crazy about. The day will come when you’ll regret that you didn’t chase your crazy!"