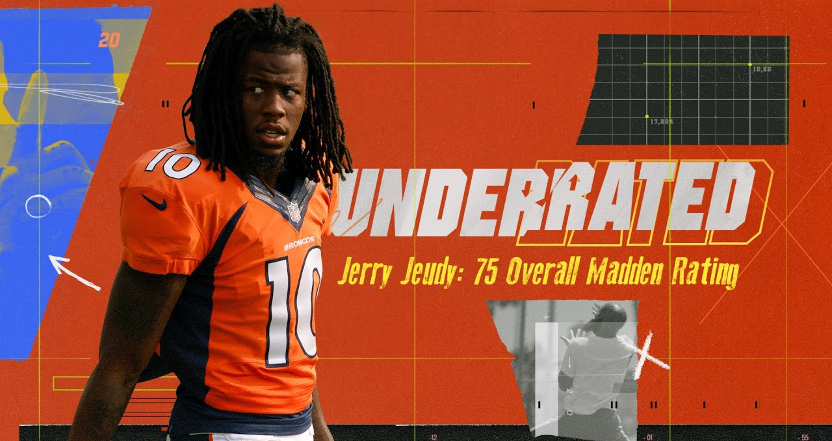 The Bleacher Report/Mandalay Sports Media Underrated series debuted last year as an eight-part digital series on B/R’s YouTube page, hosted by Adam Lefkoe. It saw NFL players (including Denver Broncos’ WR Jerry Jeudy, seen above) try to improve their Madden ratings in live drills in front of a ratings adjuster for that video game franchise. Now, the series is coming back Wednesday, and it’s gaining some TBS airings later in September. It’s also expanding beyond the NFL to other sports, and it will include professional gamers and top streamers as well. Here’s more on that from a release:

B/R Gaming is leveling up for the second season of Underrated, expanding the series to cover all the major sports video game franchises and making its televised debut on TBS. The series, co-produced by Bleacher Report and Mandalay Sports Media (MSM), critically-acclaimed producers of The Last Dance, takes on the annual debate of player ratings in video games by empowering athletes to raise contested ratings through real life challenges.

This year’s season will feature stars from all the major sports leagues as they attempt to up their ratings in Madden NFL 21 (EA Sports), NBA 2K (2K Sports), MLB The Show (Sony Interactive Entertainment), NHL 21 (EA Sports), and FIFA 21 (EA Sports). Hosted by B/R’s Adam Lefkoe, Underrated will make its digital debut on the B/R app and across B/R Gaming channels on Wednesday, Sept. 1, while premiering Friday, Sept. 24, on TBS.

…New this season, the series will also feature top game streamers, pro gamers, and online creators who will demonstrate the drills from the games represented in the series. The current roster includes YoBoy Pizza, Mike LaBelle, Ashley Sanders, Nasher and ImDavisss, who collectively reach more than three million followers across all platforms.

“Underrated is the perfect representation of B/R Gaming’s mission to tap into the crossover between gaming culture and Bleacher Report’s sports-minded audience. It’s also a major step forward for the B/R Gaming brand, which continues to evolve to reach gaming fans everywhere they are across digital and linear channels,” said Jennifer Dill, Vice President, esports at Turner Sports. “It’s been an amazing collaboration with our league partners, gaming publishers and Mandalay Sports Media to bring this all to life.”

“We’re enormously excited about this series and thrilled to be working with Bleacher Report again,” said Jonathan Vogler, Executive Producer, Mandalay Sports Media. “We believed that this concept could be expanded to other popular sports video games and become an annual franchise that stirs conversation among gamers and pro athletes around the world.”

Underrated will debut on the B/R YouTube channel Wednesday.