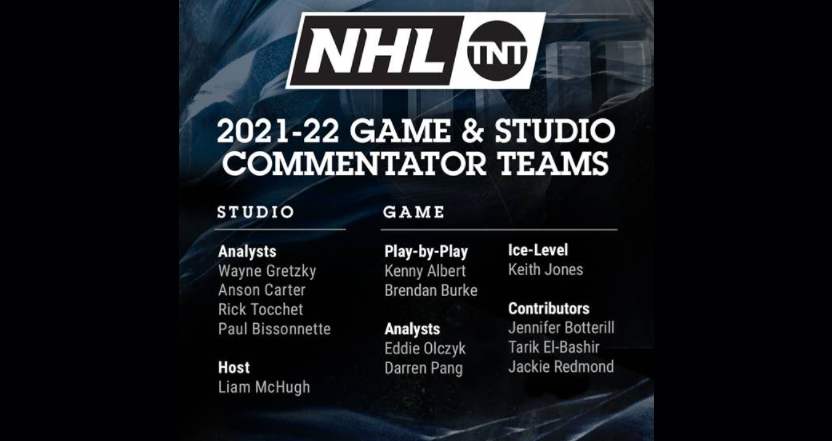 Ahead of the Oct. 12 start of the 2021-22 NHL regular season, Turner Sports has revealed its full lineup of commentators for its NHL coverage. They had previously announced the hires of Kenny Albert and Eddie Olczyk as their lead announcing team, and Wayne Gretzky as a studio analyst, and there had been reports of them adding other figures like Anson Carter. Now, we have the full details of who else they’ve brought in, including an announcing team of Brendan Burke and Darren Pang, Keith Jones providing ice-level analysis, Jennifer Botterill, Jackie Redmond and Tarik El-Bashir also contributing to telecasts, and a full studio team of host Liam McHugh and analysts Gretzky, Carter, Rick Tocchet, and Paul Bissonette. Here’s more from Turner’s release:

Turner Sports previously announced its game commentary team of Kenny Albert and Eddie Olczyk. They will be joined by Brendan Burke, who will provide play-by-play throughout the season alongside analyst Darren Pang. Keith Jones will provide ice-level analysis for NHL games on TNT, with Jennifer Botterill, Jackie Redmond and Tarik El-Bashir contributing to telecasts.

…Additionally, Bleacher Report has tapped Andrew ‘Nasher’ Telfer, one of the preeminent hockey content creators in the world, to be a key component of the brand’s NHL content strategy. Nasher, as he is more commonly known through his popular hockey-based Twitch and YouTube channels, will star in a series of interactive mid and long-form content offerings for B/R’s new NHL-specific content vertical, ‘Open Ice’, leveraging B/R’s access to NHL rights for creative across B/R and House of Highlights social channels and live streams within the B/R App.

It’s interesting to see a Bleacher Report component of this, and a sport-specific Bleacher Report vertical for hockey. They’ve found some success with their football-focused B/R Gridiron brand, including with longer shows there, and this seems to be along the same lines. Beyond that, it’s certainly notable to see the details on who else is headed to Turner’s on-air coverage; there are a lot of NBC (McHugh, Carter, Albert, Olczyk, Burke, Pang, Jones) alums here, but also some known hockey faces who haven’t really been on TV much (including Gretzky and Tocchet). We’ll see just how all of these people are utilized, and how this lineup works out for Turner.

The NHL on TNT will begin with an Oct. 13 doubleheader, with the New York Rangers and Washington Capitals in the first game and the Chicago Blackhawks and Colorado Avalanche in the second game.