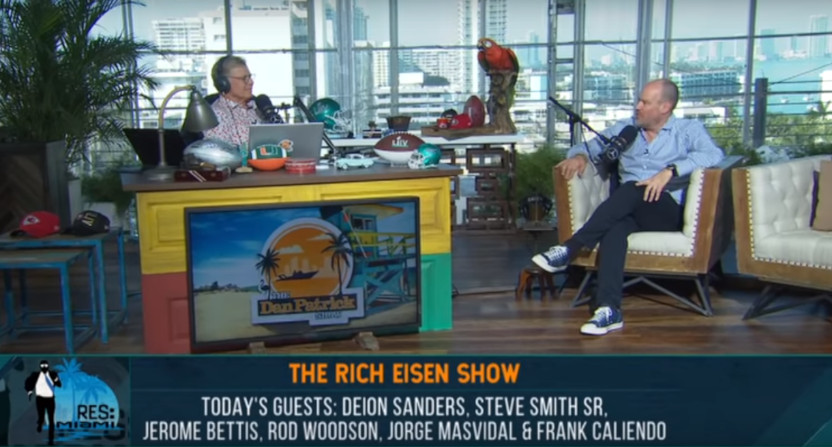 Bleacher Report launched its B/R Gridiron vertical brand this fall, and after a season in the digital space, the company is putting all of WarnerMedia’s Super Bowl week content together in Miami under the Gridiron name.

B/R Gridiron at 1111 Lincoln, the address in South Beach, will be part of WarnerMedia’s one-stop shop for everything Super Bowl related. Dan Patrick and Rich Eisen are hosting their shows all week on site with studio audiences (Patrick’s interview of Eisen Tuesday is shown above), CNN is doing its live shots and a three-hour B/R themed Super Bowl special from the location, and all of Bleacher Report’s digital and social-driven shows and podcasts will be aired live.

“We are consumer-facing, while Radio Row is much more media- and talent-led,” said Tyler Stewart, Bleacher Report’s executive director of marketing and experience. “While we will of course have quite a bit of talent come through over the course of the week, we do want it to be fan-friendly and have fans be able to come and engage with their favorite players and their favorite shows.”

Original programming at 1111 Lincoln will also include a conversation between Master Tesfatsion and Miami legend Ed Reed on Tuesday as part of his Untold Stories series, Adam Lefkoe’s Ditch The Playbook x’s and o’s-based podcast with Keenan Allen and Landon Collins, and a Stick To Football tailgate special on Saturday. Players slated to appear on Thursday and Friday include DeAndre Hopkins, Aaron Donald, Tua Tagovailoa, Jalen Hurts, Russell Wilson, Derrick Henry and Joe Burrow.

“We have a full week of programming where fans will be able to come and engage and see these things for the first time in real life instead of just online,” Stewart said.

There will also be an online component of well, of course, which they’re calling the B/R social circuit.  Stewart called it an always-on social opportunity for players to come through and get broadcast across the outlet’s social channels. That included an AMA with Minnesota Vikings wide receiver Stefon Diggs taking his talents to South Beach on Tuesday.

Around the same time Bleacher Report launched B/R Gridiron, it also opened up its gambling-centric studio inside Caesars Palace in Las Vegas, which will host betting-related shows on Wednesday and Sunday. CNN’s three-hour Super Bowl special will be from 3-6 p.m. eastern on Friday at 1111, with B/R’s Matt Miller joining yet unconfirmed talent on set. J.J. Watt was the featured CNN guest last year in Atlanta.

Stewart expects all-encompassing endeavors like WarnerMedia’s B/R Gridiron House to be a continuing trend as time progresses, to bring consumers as close to the action, and sponsors like DiGiorno, Wrangler, State Farm and Taco Bell closer to those consumers. It’s a convenient way to get the most out of your content, create engagement and drive revenue, which is really what Super Bowl week boils down to anyway.