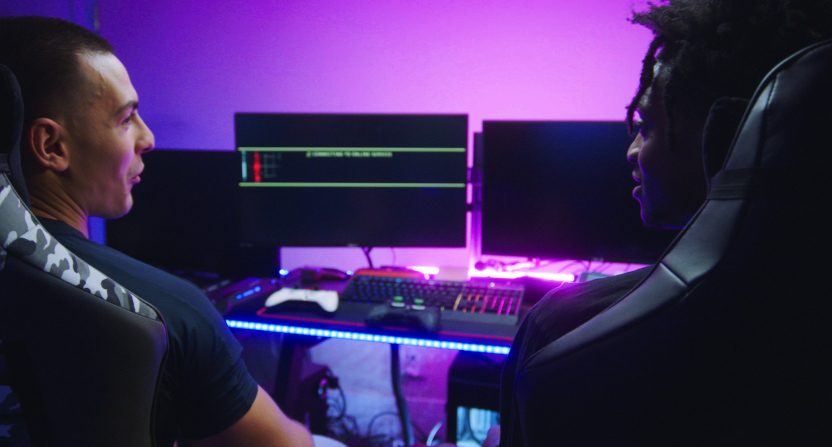 Bleacher Report has teamed up with Hollywood creative studio Kids at Play to produce two episodes of Battlestations, a show exploring professional athletes’ video gaming setups. The show is hosted by four-time Call of Duty national champion Doug “Censor” Martin, and the initial 11-minute episodes (which Bleacher Report will air across their channels in November) see him visiting with NBA players De’Aaron Fox of the Sacramento Kings (seen above with Martin) and Josh Hart of the New Orleans Pelicans at their houses, checking out their gaming rigs and seeing how they use video games to unwind. Kids at Play’s Jason Berger recently spoke to Awful Announcing about Battlestations, and said the idea was to come up with something that could appeal to both traditional sports fans and esports fans.

“I had been trying to figure out a very good video game show, a show about video games for gamers, but not just for gamers,” Berger said. “What I realized is that there’s a lot of crossover with sports, there’s a lot of e-athletes now, and we just started to really dive into where the places are where the sports fan was at that might also have some crossover with the gaming community.”

It’s interesting to see this land at Bleacher Report, as B/R has been amping up original video efforts recently with documentaries like Quiet Storm: The Ron Artest Story (which aired on Showtime earlier this year) and the Take It There interview series with Taylor Rooks. Berger said Bleacher Report chief content officer Sam Toles was supportive of this idea, and B/R was a good launching platform to hit both those sports and gaming audiences.

“Sam Toles, who I’d known for a long time now, had just gone over to Bleacher Report to kind of run creative and strategy for them. We just started to talk about it and he thought they could benefit from it, that it was the right fit for them, and that they could also give us some key analytics of who the professional traditional athlete gamer was that would resonate with his audience as well as potentially the gaming community. That’s how we figured out Bleacher Report was the best spot for it.”

“It also felt right to start with Bleacher Report, because they have such a big audience in that space. And the gaming community is exploding, so it’s not as much of a reach as it used to be; they felt there was enough crossover for folks who would be watching stuff on Twitch.”

Berger said he thinks this could be a gateway series for traditional sports fans who aren’t already into esports, as it’s about not just particular video games, but showing off why these athletes care about games.

“It comes down to passion. If you talk to folks like Censor, or you talk to Josh Hart or De’Aaron Fox and some of these guys that we’ve interviewed, they’re just passionate about gaming. And I think really, at the end of the day, this expands on its audience by showing passion at the core. I think people can appreciate that. And they like folks that are genuine and honest and passionate, which comes across in the series quite nicely, especially in the dynamics between Censor and these athletes; there’s a lot of common ground there.”

Berger said Martin was the perfect fit as a host, as he brings esports knowledge but has a great rapport with the athletes.

“Censor, being a four-time Call of Duty champion, he’s extremely knowledgeable. And he played sports a little bit in school, he trains a lot, he’s into physical fitness, so we felt that he both had the best crossover appeal and is a person who can really mesh well with the athletes. His credibility in the space was key; we wanted a star and he’s a star.”

For now, Battlestations is just the two initial 11-minute episodes (one with Hart and one with Fox), but Berger said there could be much more ahead. And he said the concept is adaptable to whatever format potential off-platform licensers are interested in.

“We’re going to see how it does. The plan is obviously to go to series with this. This show’s extremely malleable in the sense of it can be long-form, it can live within a half hour, it can be expanded to meet the needs of other streamers and platforms while also having a traditional Bleacher Report side to it. We’re feeling it out, and so far the response has been fantastic.”

Berger said putting out a show on the intersection of gaming and sports was a perfect fit for Kids at Play, and he’s optimistic about where it can go.

“These are two areas that we’re extremely passionate about ourselves, and very respectful of both the mediums, from the traditional athlete to the gaming athlete. I hope that everyone enjoys it as much as we have making it.”

The current two 11-minute episodes of Battlestations will air across B/R channels in November.