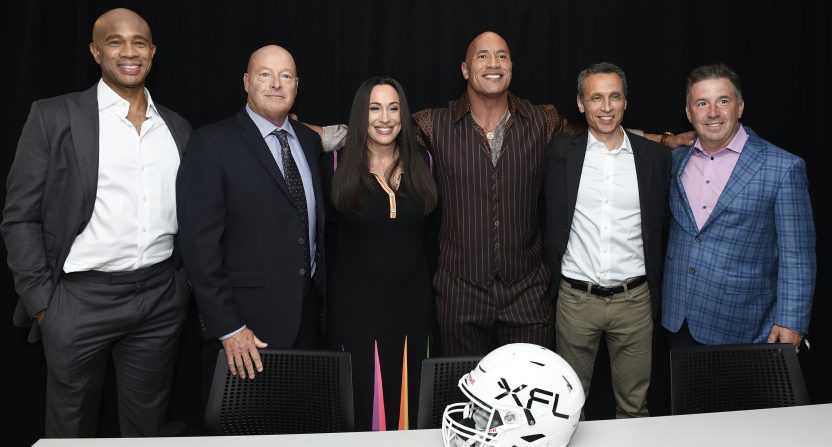 The Walt Disney Company and ESPN announced Tuesday that they have reached an exclusive multiyear agreement to broadcast the latest version of the XFL’s regular-season and playoff games.

The third iteration of the XFL, which is now owned by a group that includes Dwayne “The Rock” Johnson, plans on kicking off its season on Saturday, Feb. 18, 2023, with eight teams. The regular season will consist of 40 total games, followed by two semifinal playoff games, and the championship game.

While it’s presumed that a majority of the game will be shown on ESPN platforms, including ESPN and ESPN2, the deal also calls for games to be broadcast on ABC and FX. Additionally, Disney is granted exclusive content rights across Disney/ESPN’s digital, social and direct-to-consumer outlets such as ESPN+. Global rights for Disney and ESPN are also part of the agreement.

“This is a definitive moment for the XFL and the beginning of an incredible, long-term partnership for the league, building on my longstanding, very successful legacy relationship I’ve had with Disney throughout my career,” said Johnson in a press release. “We’re excited to be working with global visionaries that are aligned with the XFL’s values, are true team players, and share our ambitious goals to grow the XFL as a global sports and entertainment business. Through the combined power of Disney and the XFL, together we will create a new powerhouse on the sports calendar and bring a dynamic game of football to fans everywhere. Time to ball out.”

The league has announced the eight head coaches who will lead their teams in 2023, including Bob Stoops, Jim Haslett, Wade Phillips, Hines Ward, and Rod Woodson. Details surrounding the team names, cities, and game locations have yet to be revealed.

Will the third time be the charm for the XFL? It remains to be seen. The initial version introduced the pro football world to some broadcasting innovations still in use today but was an abject failure in most ways. The second version in 2020 showed promise (though people forget the ratings were in free-fall) but was cut short midway through its first and only season due to the COVID-19 pandemic. Afterward, Johnson, Dany Garcia, and RedBird Capital purchased the XFL from Vince McMahon for $15 million.

Presumably, given their relationship with Disney and ESPN, coupled with a budding relationship they have with the NFL, this version of the XFL is setting itself up for success. They also seem to have learned the lessons left behind in the graveyard of professional spring football leagues. Instead of trying to compete with the NFL, this version appears happy to be a proving ground on their behalf and potentially a shadow minor league system of sorts. If spring football is ever going to find long-term success, that sounds like the recipe to make it happen.

The USFL might have been first out of the gate this year but they already seem like an afterthought in the public consciousness. We’ll see if XFL 3.0 has what it takes to maintain some semblance of relevance by the time their first season is completed. This broadcasting deal certainly bodes well in the meantime.