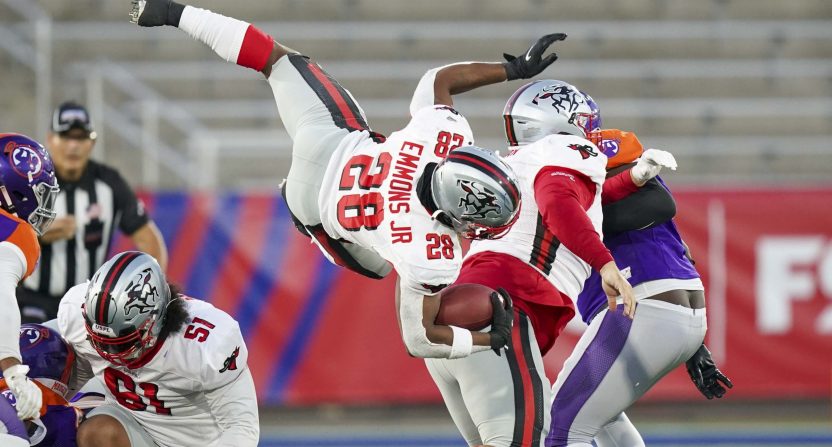 The USFL 2.0 completed its opening weekend on Monday evening. The South Division dominated early action, winning all four games against their North Division counterparts (though all games were played in Birmingham, AL). The weekend featured some hard-fought victories, three close games, and a thrilling finish. On paper, it was all the things that you’d hope to get out of a spring football league opening weekend.

The Tampa Bay Bandits & Pittsburgh Maulers returned to play their USFL opening weekend game Monday night, though it doesn't appear many fans have returned with them. pic.twitter.com/mYkCZMMK0U

However, it’s hard not to feel like something was missing. There was a distinct lack of energy all weekend, especially on Monday night when a rescheduled game meant that the stands were quite literally empty. The buzz of the drone camera was often the only thing keeping the audience’s attention in between plays.

The biggest story to come out of the weekend wasn’t related to any of the gameplay but rather a wild incident captured in a documentary series. The Pittsburgh Maulers cut a player because he asked if he could eat a slice of pizza instead of chicken salad. While the Maulers looked dreadful on the field, the drama playing out on social media surrounding this was far more interesting. And as far as we could tell, it was never mentioned during the broadcast.

Bro got cut by a USFL team for ordering pizza instead of a chicken salad??? lmaoooo pic.twitter.com/Vo7n7HD0PU

But it’s hard not to juxtapose how the USFL looks and feels so far with how the XFL 2.0 presented itself.

Yes, the 2020 XFL suspended operations in the middle of its first and only season, but that was due more to the pandemic than a lack of interest in the league. If anything, people remember that version of the XFL fondly. In part, because the gameplay was decent, but also because the XFL seemed to understand that there’s a time to let the football speak for itself and there’s a time to create engaging television.

Whereas the original version of the XFL went too far into the absurd, the second version seemed to understand that audiences need engaging reasons to care about the football games they’re watching. And so, we had Pat McAfee doing Pat McAfee things during broadcasts, we had F-bombs getting dropped during sideline interviews, and awkward interactions with players.

The fascinating impact of that kind of engagement was perhaps never better than quarterback Matt McGloin’s no-good, very bad day in which the former Penn State star got benched after playing poorly, threw his coach under the bus on live television, and then we got to see the drama play out in real-time thanks to sideline reporter Dianna Russini’s access and hard work.

Then Matt gets narc'd out to his head coach (2/3): pic.twitter.com/lik8pXDQwY

All of a sudden, what could have just been another mediocre football game between two teams you’re not very invested in becomes a trainwreck that you absolutely need to keep watching in order to find out how it all ends.

They really just put out a lie! Y’all really should be ashamed of y’all selves! https://t.co/NsfnidUZoe

Imagine if the USFL had followed that playbook on Monday night. Pittsburgh Maulers’ coach Kirby Wilson’s decision to cut De’Veon Smith over pizza goes viral on Monday. The team releases a statement right before their game and Smith responds by calling them out as liars.

What if, during the game, Wilson is asked about the situation? As his running game fails to get anything done, he’s asked whether or not he regrets cutting a solid running back over a silly reason? If you’re really feeling ballsy, you reach out to Smith for comment at halftime. And then you build the entire storyline of the evening around whether or not Wilson cost the Maulers the game in part because of a wild decision that people are already talking about.

Did a Tampa Bay Bandits defender say "chicken salad" to troll the Maulers??? Or is that the name of one of their plays?? ? #USFL

Maybe that doesn’t pop the ratings or end up on SportsCenter, but it’s a fascinating storyline that harnesses the self-awareness an entertainment entity like a spring football league needs in order to get people to watch a boring game they’re otherwise not invested in.

It’s why the ManningCast was so successful and the KayRodCast appears to be a dud. Because people invest in personalities and engaging ideas, not just the platform itself.

To be fair, the USFL is dealing with some serious drawbacks that the XFL 2.0 didn’t have. Playing all games in Birmingham means that you don’t have the chance to build up any actual fanbases and, therefore, aren’t going to get crowd noise or inspired shots of people having fun in the stands. The league is also kicking off in April against tons of competition for your eyeballs (NBA playoffs, MLB games, NASCAR, golf, etc.), whereas the XFL began in the dead period of February when it was much easier to get an audience.

Spring football leagues have come and gone with almost all not returning for a second season (many didn't finish their first).

With that in mind, what is your read on the USFL one week in

It’s still early and, considering the backing it has and the various networks invested in its success, the USFL should have some time to work out a lot of issues. Ultimately, as always, it’s going to come down to whether or not audiences are willing to sit through the football games themselves. And if the level of play isn’t going to be in a place that audiences are used to, which it isn’t, it makes sense to try and figure out other ways to make them care. And while drone cameras are a neat feature, that’s not gonna get it done.

The answer, perhaps, is to lighten up a little bit and, y’know, have some fun out there.