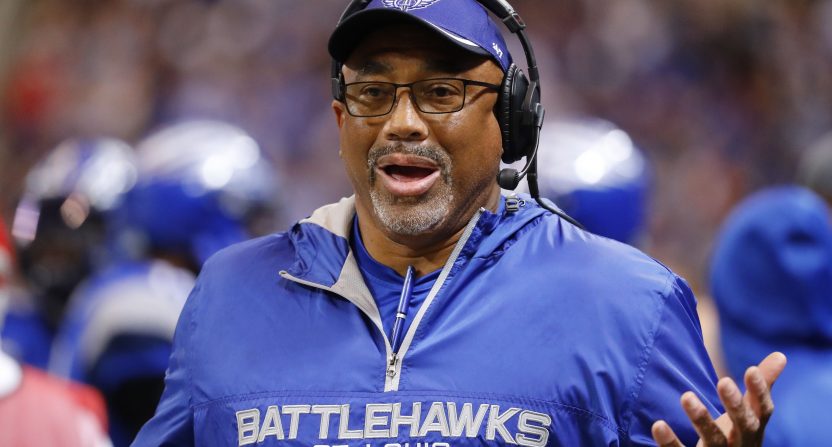 XFL truthers, look away: the league’s Week 5 viewership numbers are in, and they’re not pretty.

Each of Sunday’s games on cable drew under a million viewers. The early game (St. Louis-DC) on FS1 drew 767,000 viewers, and the late game (Tampa Bay-LA) on ESPN drew 833,000. A week ago, the two Sunday cable games drew 1.11 million and 1.03 million viewers for the early (FS1) and late (ESPN2, two hours earlier than this week’s late game) matchups, meaning that this week’s two Sunday games dropped 33%.

In all, Week 5’s four XFL games averaged 1.16 million viewers. That’s a 19% decline from Week 4 (even with one game shifting to ESPN from ESPN2, albeit in a worse timeslot), and actually a larger decline than the drop from Week 3 to Week 4 (17%).

Saturday’s lone nationally televised game (Sixers-Warriors) topped all XFL action for the weekend, as did Sunday’s Lakers-Clippers tilt. Three weekend college hoops games (UNC-Duke, Ohio State-Michigan State, and Kentucky-Florida) all also topped the quartet of XFL games (though, it should be added, UK-UF’s viewership was virtually identical to the Seattle-Houston game that started in the same window, an hour later).

The good news for Sunday: the XFL was the top live sport of the day on cable. The bad news: the competition was a 10 AM Premier League game, a pair of evening NHL games, a couple MLS games, two NBA TV games, and the Big South championship game. You’d think the bar would be higher after the exceptional early season viewership the XFL enjoyed.

XFL fans should be prepared for another week of poor viewership in Week 6: in addition to dealing with a strong week of college basketball on the slate leading into the NCAA Tournament, just one game (Houston-New York, the early Saturday matchup) is on broadcast TV (ABC, in this case), and the other three games are on cable (including Saturday night’s St Louis-Tampa Bay tilt on FS2).

Here’s the thing: nobody is claiming that the incredible Week 1 viewership needed to hold up over the course of the whole season. Hell, even the strong Week 2 numbers wouldn’t have needed to be the norm. But when, five weeks into the season, viewership has declined every week, and the decline actually accelerated in the latest week, that’s not a good sign for the public’s desire to consume your sport’s content. The XFL isn’t dead in the water, but it very well could be once the playoffs come around if fans keep abandoning the sport each week for greener pastures. Eventually, “better than hockey and MLS!” won’t be good enough to stand on, and the XFL and its TV partners will need to have a serious conversation about what to do going forward.