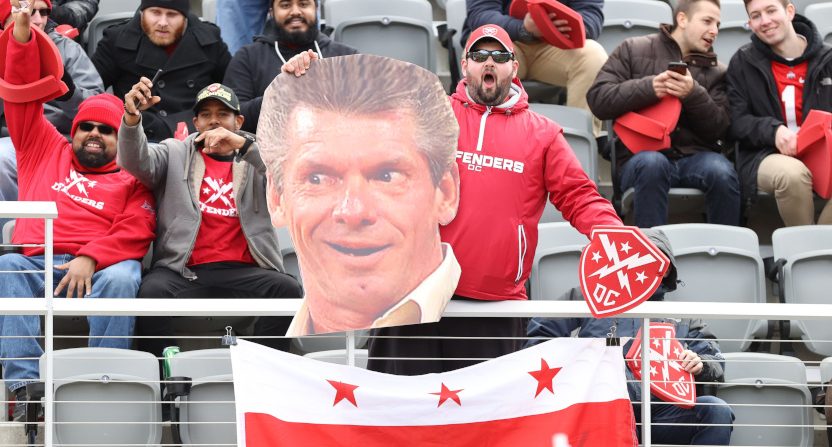 The new XFL’s opening weekend attracted a lot of media interest for the players involved, the new broadcasting approaches and more, and it appears at least some of that translated into decent ratings. The opening game (Seattle Dragons/D.C. Defenders on ABC, 2 p.m. Eastern Saturday) drew a slightly larger audience than the AAF’s debut last year, as per Austin Karp of Sports Business Journal:

Sooooo close on the XFL vs. AAF debut telecast comparison:

As Paulsen writes at Sports Media Watch, that number is per Nielsen fast nationals, and it’s the most-watched non-NFL pro football game since Week 6 of the original XFL in 2001 (which drew an audience of 3.67 million viewers). It’s obviously a long way down from the original XFL’s debut (15.7 million viewers on NBC in primetime), but that’s to be expected; the original XFL drew an incredible amount of interest at the start, and that’s going to be hard to repeat. This was certainly a solid debut, though, and as ESPN PR noted, it drew a peak of four million viewers and posted some impressive local numbers (especially in Seattle-Tacoma):

The @xfl2020 on ESPN/ABC is off to a strong start! pic.twitter.com/ZjAzmTLmz9

Fox also was happy for the ratings for their Saturday evening game (5 p.m. Eastern), which averaged 3.290 million viewers:

The XFL on FOX starts off strong! ? pic.twitter.com/1SEa0EFG6I

And the Sunday evening (5 p.m. ET) game on ESPN drew decently as well, especially with the caveat that it was on cable rather than broadcast:

Overall, these games averaged 3.118 million viewers, and that’s a pretty good start, especially with the Sunday game surpassing the first one Saturday. That shows interest isn’t just declining from the much-hyped start (as it did somewhat with both the AAF and the original XFL). The big questions are how the viewership will hold up over time, and what level of audience is needed for this to be viable.

As per that first question, it’s notable that the AAF ratings last year actually held up pretty well despite huge amounts of negative off-field stories about the league’s finances (which wound up being very important, considering that the league didn’t even make it through its first season). The 2.1 overnight ratings for the AAF debut games were the best non-NFL ratings since a 2004 Arena Football League game, and the aforementioned debut game viewership of 3.25 million obviously didn’t hold up completely, but the league still posted some very respectable numbers throughout its run, especially on smaller cable networks. Week 2’s games averaged a million viewers on TNT and around 425,000 on NFL Network, and Week 3 on NFL Network jumped to 491,000 and 515,000 despite off-field financial questions. TNT wound up picking up more AAF games than they’d originally planned on thanks to the league’s ratings performance, and a whole lot of networks wound up with programming slots to fill after the league’s collapse.

The XFL is quite likely to draw better viewership numbers than the AAF thanks to its better network placement; its games are either on network ABC or Fox or on ESPN, while the AAF had just a couple of games on network CBS, a few on cable TNT (similar reach to ESPN), more on NFL Network (less reach than ESPN), and a bunch streaming-only on B/R Live. So it’s not just about outdrawing what the AAF did. But the AAF ratings performance even on smaller networks like NFLN and even later in the season (the ratings dropped over time, but they were still okay given the channels involved even at the end) suggests there’s an appetite out there for alternative pro football in the spring. And the other good news for the XFL so far is that they handily won the week in the coveted adults 18-49 demographic: all of their games beat all comers this weekend, and three of their four games beat everyone this week as well, with the fourth (the one on ESPN Saturday night) still averaging 1.21 million viewers in that demo, just behind the 1.25 for the NBA on TNT Thursday night (Rockets-Lakers).

If the XFL can build on that and can take advantage of its better network placement, it could pull in decent viewership. There’s no guarantee that the numbers will stay high as we go along, and there will likely be some attrition from Week 1 (as the novelty factor’s gone). But there’s certainly a good chance they’ll still be pulling in a fair bit of viewership, especially during a period of the sports calendar where there isn’t a lot of high-profile competition. It’s also helpful that this league has much better financial backing (from WWE owner/chairman/CEO Vince McMahon), so it seems likely to at least play a full season; that’s useful for attracting fans and selling merch, and means there shouldn’t be the constant doom-and-gloom financial stories that surrounded the AAF.

A more important question may be what level of viewership is needed to make this worthwhile, though. As the Spider-Man books would say, “With great power comes great responsibility;” the television corollary to the Peter Parker principle is “With better networks and timeslots comes more ratings pressure.” It’s far more worth it for NFL Network to draw 515,000 viewers (something they rarely get, especially in the offseason) than for Fox to draw a million (which would be disappointing, given that they can do better than that with cheap reruns).

For comparison, WWE Smackdown seems to be pulling in 2.4 to 2.5 million viewers most week Friday nights on Fox, and they’re paying $200 million a year for those rights. The Friday night timeslot has some challenges, so XFL to Smackdown comparisons won’t be apples to apples, but that one’s worth keeping in mind considering the shared ownership of the leagues. If XFL games can get anywhere near the Smackdown numbers on a regular basis, that will bode well for the league. We’ll see how the XFL does relative to Smackdown as the season progresses.

Of course, the expectations from the networks aren’t all that high given that they’re reportedly not paying the league for TV rights at this point (it’s unclear if they’re sharing ad profits or if this is a straight time buy where the league pays for TV time and then keeps all its ad revenue). So this is already starting on a better level than something they’re paying for, like Smackdown. But they are paying for production costs, so if the viewership absolutely tanks, this starts looking worse for them.

And the league is going to have to post very good numbers indeed if it wants a rights fee in the future; with the AAF, Sports Illustrated‘s Conor Orr reported last spring that part of the decision to suspend the league was based on comments from TV partners that they’d have to keep paying for airtime “for the foreseeable future.” We don’t know what the XFL business plan is, but if it depends on TV revenue down the line (which it probably should; in-person attendance so far hasn’t been great, and TV is really the critical part of the business model for most leagues at this point), they’re going to have to substantially outperform the AAF there. We’ll see if they’re able to do that.