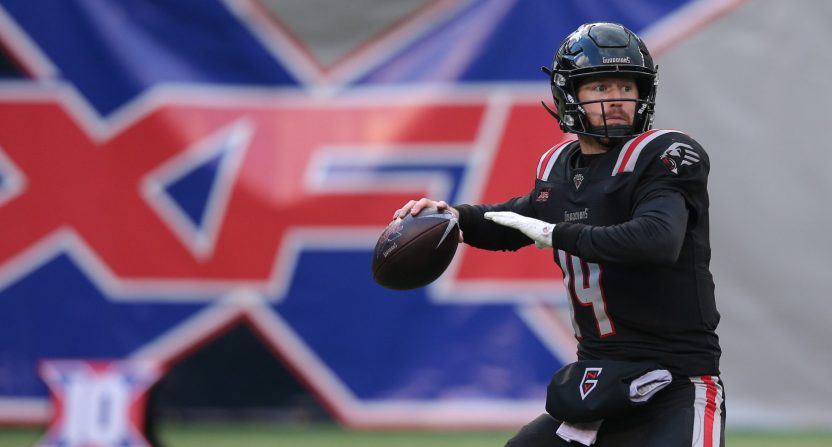 The XFL suspended its season back on March 12 with a statement that they wouldn’t be playing further 2020 regular season games thanks to the COVID-19 coronavirus pandemic, but left the door open for postseason play this year and committed to playing a full season in 2021. But that future season doesn’t seem too likely now, with the league reportedly laying off all of its employees in a conference call Friday (and also refunding fans money they’d paid for 2021 tickets):

Now word comes from two sources that the XFL has suspended operations.

375 people on the conference call spreading the bad news about XFL, so obviously not much effort to keep things a secret. Not much to spin here.

The XFL just held a conference call in which all employees were told the league is suspending operations. Said one: "The word they used was 'shut down'."

Also, to be further clear. The XFL just fired EVERYONE. A ton of talented people out there now.

As per Kevin Seifert and Field Yates of ESPN, the league currently has no plans to return in 2021:

The XFL suspended operations Friday morning and laid off nearly all of its staff, multiple sources told ESPN. While a handful of executives remain employed, the league currently has no plans to return in 2021.…XFL CEO Jeffrey Pollack changed course Friday, conducting a 10-minute conference call to inform employees of the news.…According to a prominent former XFL staffer who was on the call, Pollack stopped short of saying the league was going out of business. But the strong implication was clear. “It’s done,” the staffer said. “It’s not coming back.”

That sure makes it seem like it’s the end for this incarnation of the XFL. It’s of course always possible that the league tries to start over after health regulations are eased (although no one has much of an idea when that will be), but with all the employees let go, that would be building from scratch yet again. Vince McMahon certainly has the money to do that if he feels like it (Forbes estimates him with a current net worth of $1.9 billion US), but this has already been a costly venture for him (and WWE’s own stock declines are posing other problems for him), so he may just cut his losses.

The XFL’s ratings performance also would appear to make it less likely that this league will come back. The ratings started off reasonably strong, but declined and declined and declined from there, with the Week 5 games (the last ones played) drawing 1,547,000, 1,497,000, 833,000 and 767,000 viewers on Fox, ABC, ESPN and FS1 respectively. That’s an average of 1.16 million viewers, a 19 percent drop from Week 4 and a 63 percent drop from Week 1’s average of 3.118 million viewers (with the caveat that three Week 1 games were on broadcast TV, with only one on cable).

Those aren’t great numbers for anything on broadcast TV, although they’re probably fine for cable (especially during a pretty dead period of the sports calendar, and especially with the networks not paying the league for rights). And while the current TV numbers alone weren’t bad enough to pull the plug, further declines might have caused some problems. But while these numbers could have been okay if the league had been able to continue as normal, the numbers from near the end certainly don’t indicate that there will be a ton of pent-up demand for another XFL revival at some future date.

If this is indeed the end for XFL 2.0, it’s certainly an unfortunate way to go out. As AA’s Joe Lucia wrote in March, the league did a fair bit to intrigue viewers (especially with some tweaks from traditional football broadcasts), and while it wasn’t doing gangbusters numbers, it wasn’t completely flopping. And the financial underwriting from McMahon meant that it was far more stable than its AAF predecessor (it also had much better TV exposure), and the league’s suspension of its season was about a global pandemic that’s affected all sports rather than anything inherent to it. Until COVID-19 hit the U.S., the XFL seemed able to at least finish its 2020 season, and while there would have been some questions about its future beyond that, the league probably could have carried on (as long as McMahon was willing to keep funding it). But thanks to circumstances beyond its control, it now seems that won’t be happening.