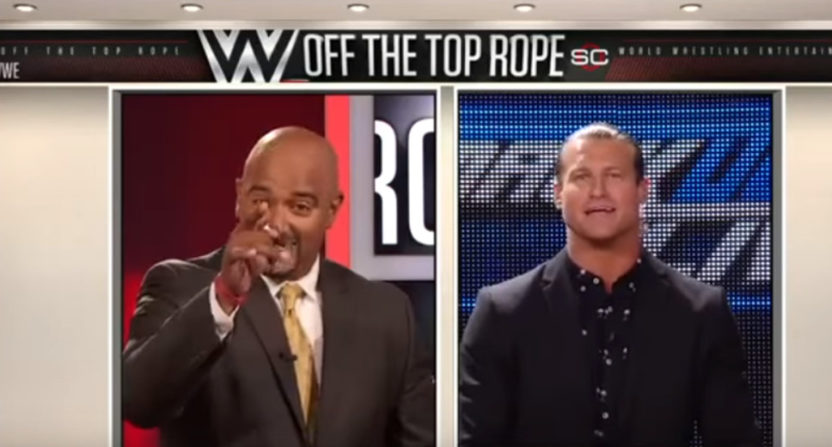 Over the last few years, ESPN has expanded their professional wrestling coverage significantly, covering wrestling on SportsCenter at times and even launching a WWE vertical in August 2016. They’ve taken criticism for that, perhaps most notably from public editor Jim Brady, who wrote a “ESPN wrestling with fiction/non-fiction in deciding to ‘cover’ WWE” column in October 2016, arguing that “To me, the line ESPN has to be careful when crossing is the one separating fiction and nonfiction, real competition and pure entertainment. And pro wrestling is simply well-performed fiction. For a news organization, I think this is a poor fit, and one that comes with real risk.”

Brady revisited that in his latest column Thursday, and got some interesting comments from ESPN senior deputy editor Dan Kaufman, who oversees both the wrestling and esports verticals.

“Wrestling has been more of a challenge than esports,” Kaufman put it succinctly.

Much of the focus of my 2016 WWE column concerned the difficulty of taking professional wrestling — with much of the action scripted — and inserting it into an operation that covers unscripted sports. But that hasn’t been the problem Kaufman has experienced. The real challenge?

“We’re never going to be the place for the hard-core wrestling fan,” he said.

Part of the reason for that is that there are still many inside ESPN who aren’t sure how much the network should be committing to this effort.

“It’s fair to say that, right from the start, there were execs who were conflicted about [covering WWE],” Kaufman said. “It doesn’t feel like, to a lot of them, something we should be doing.”

The journalistic concerns Brady has argued about have always felt a bit exaggerated from this standpoint, considering that this is a network originally founded as the “Entertainment and Sports Programming Network” and considering that they cover all sorts of things that aren’t necessarily “sports news,” from who athletes are dating through musicians’ takes on sports through corporate tie-in features on things like lightsaber duels. Coverage of the outcomes and execution of WWE matches feels a little more newsworthy to many sports fans than much of that, even if the outcomes are determined in advance; it’s not like the audience doesn’t know that.  Many sports outlets cover WWE with no apparent problems, and heck, ESPN provides their own performative theater every morning with First Take.

But it’s interesting to hear that there are ESPN executives “conflicted” about WWE coverage, and that many of them aren’t eager to promote wrestling coverage on the news side. Whether those concerns about covering wrestling have any actual merit or not, if those inside ESPN feel they do, that’s going to impact how many resources they devote to WWE and how well their WWE coverage does. And while it sounds like it’s doing okay, “okay” may not be enough to keep it around for the long term if important executives aren’t backing it.

What’s perhaps the more notable journalistic discussion in Brady’s piece is about ESPN’s lack of coverage of a negative WWE story. That would be announcer Mauro Ranallo’s exit from the organization last year, which came after Ranallo missed a broadcast and was criticized by fellow announcer John “Bradshaw” Layfield. Brady discusses how that spawned accusations of bullying behavior from Layfield over his 20 years at WWE. Ranallo eventually left to call MMA action for Bellator, while Layfield left in September, saying he was exiting to focus on his charity work. (Beyond his Bellator work, Ranallo has since also returned to WWE to call their NXT developmental series.)

The Ranallo-Layfield scandal was a hot topic almost everywhere wrestling is covered, but was barely touched on at ESPN, with their main mention of it coming a month later from podcast host Pete Rosenberg (who also works for WWE) in an interview with Layfield where he let Layfield rip Ranallo, with another one coming with one question to former ring announcer Justin Roberts (who was then ripped by Rosenberg), and with the then-host of the weekly SportsCenter “Off The Top Rope” wrestling segment Jonathan Coachman (who has since left, is now hosting World Long Drive coverage for Golf Channel, and said amidst his exit that the WWE segment was cancelled because it got too popular) trying to downplay the Ranallo story on social media.

And that drew deserved criticism, including from B.J. Bethel of the Dayton Daily News, who argued that it showed how ESPN isn’t covering important wrestling stories and should stop with their halfhearted coverage, in a piece titled “WWE Bullying: ESPN should end coverage of pro wrestling“:

So after a week of scandal where one of its anchors became a trending item for all the wrong reasons, ESPN’s best response wasn’t actual reporting but to have a WWE employee accuse the reporter who has covered the company for 40 years of being on a witch hunt, and for an author who worked there over a decade of having an agenda.

…If this is the best ESPN can do, it shouldn’t cover pro wrestling. Let [Dave] Meltzer, who started covering wrestling when it was one of the most secretive industries in the world in the early 1970s, do the reporting or Mike Johnson and his colleagues  at PWInsider, or Jason Powell of Prowrestling.net. Their opinions on the subject may vary, but they have sources and they treat it like a job.

…It may report injuries, get interviews or update on contracts, but ESPN today isn’t just making no difference, it’s hurting the situation with its own involvement while having no skeptical reporting. By not acknowledging the story but attacking those who have, it’s a pox on a company that has revolutionized sports coverage and journalism on television, and in many cases, is the one sports outlet that matters when it comes to news.

The Worldwide Leader should take a walk, and leave reporting to pros, like the reporters mentioned above. If you want real commentary, and not Rosenberg’s screeching YouTube-ish “leave JBL and WWE alone” rant, try Bruce Mitchell at PWTorch.com, who brings education, insight and wit – and not a pay stub.

If you’re going to argue that ESPN should end its wrestling coverage, Bethel’s “they’re not covering it seriously enough” feels like a better argument than Brady’s “it’s not news.” But regardless of where you’re coming from on that front, the lack of attention paid to the Ranallo story is troubling, as Brady writes:

Kaufman declined comment on the bullying controversy, as much of it occurred on platforms outside of his purview. That said, the fact the WWE vertical didn’t cover the story was notable, and not in a good way.

Indeed. And ESPN’s lack of coverage there drew plenty of criticism, which may further tip the scales against the long-term future of the WWE vertical. Now, it’s not like a story like that breaks every week, but there are going to be serious stories that do pop up from time to time. And if ESPN isn’t more willing to properly dive into them in the next instance, they’re going to take yet more flak. We’ll see how their WWE coverage continues to evolve, and maybe they’ll do a better job next time around. But between the “conflicted” executives, traffic that’s only “steady,” the cancellation of the weekly SportsCenter wrestling segment, the departure of Coachman (the company’s most-prominent on-air commentator with a wrestling background) and the criticism for either covering wrestling at all or not covering it in enough depth, there are certainly some questions about the future of ESPN’s WWE coverage.