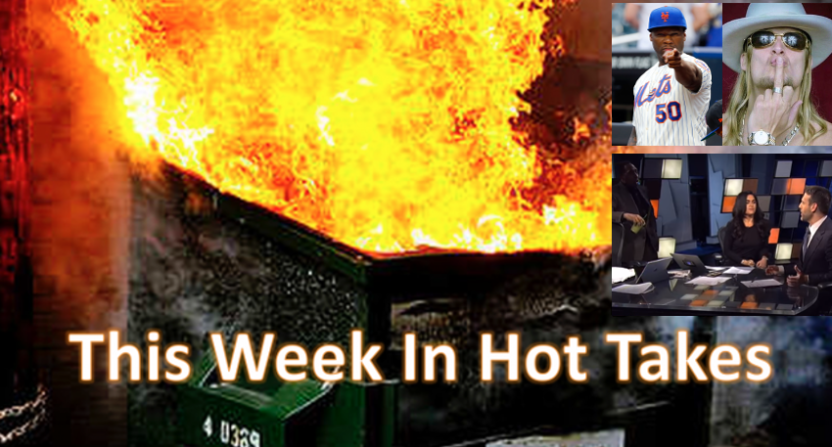 Welcome to another edition of This Week In Hot Takes, this time breaking down all the hottest sports media takes from Jan. 12-18.

5. Rob Parker says the Lakers should trade Lonzo Ball to attract LeBron: If you’re Rob Parker, and you somehow still appear on television in 2017, you drop hot takes. It’s what you do. The latest? Parker argues that the Los Angeles Lakers should get rid of promising rookie Lonzo Ball, the second-overall pick in last year’s NBA draft who’s averaging 10 points, seven assists and seven rebounds this year. And why should they do that? Not only so they don’t have to worry about father LaVar Ball’s comments, but so they can sign LeBron James in free agency.

The good part starts at 1:00: “Magic Johnson should consider trading Lonzo Ball. He should! I would trade him for this reason. Take a look, if LaVar is this out of control and saying the things that he’s saying when his kid’s not even playing all that great, he will be uncontrollable, unstoppable once Lonzo gets even better. It’s going to hamper the Lakers being able to attract people who want to come play for the Lakers and be in this situation. We talk about LeBron James and how sensitive he is, we talked about it with Charles Barkley, right? So now you think he’s going to come, his last three years in the NBA, he’s going to come to LA and have to deal with the circus and the nonsense that is LaVar Ball? I don’t buy it. I don’t think anybody who’s trying to win will want to be involved in this situation with the Lakers and with the sideshow that is LaVar Ball.”

There’s certainly an argument out there that LaVar’s comments about head coach Luke Walton aren’t great for the Lakers, but Parker is taking a thread and sewing a sweater on it here. First off, proposing trades because you think they might make a free agent who literally every team would love to have choose your team is quite risky, and beyond that, any free agency decision (especially from an older player in win-now mode) is likely more about a team’s talent than about who one player’s father is. And trading Lonzo Ball at this point is unlikely to bring a return that makes the Lakers better. Moreover, there’s a case that Lonzo could be a great point guard to pair with LeBron given his pass-first mentality, a substantial departure from the LeBron-Kyrie Irving conflicts. But regardless of that, it feels ridiculous to suggest trading a second-overall pick having an impressive rookie season because an in-demand pending free agent from another team may not like the rookie’s father. Oh, and over in the NFL, Parker gets a bonus point for using the Vikings’ miracle win and the Jaguars’ victory over the Steelers to take shots at Detroit Lions’ quarterback Matt Stafford.

4. Skip Bayless, MD: San Antonio Spurs’ star Kawhi Leonard has missed several games with a serious quadriceps injury this year, and was ruled out indefinitely thanks to lingering pain from it Wednesday. But noted Spurs’ fan Bayless thinks the injury is all mental and he should play through it:

KAWHI LEONARD: It's mostly in your head. Trust your body and just play. It will be OK.

Kawhi Leonard's thigh condition is the strangest thing I've encountered in all my years covering sports. Just baffling. Inexplicable. Undiagnosable. Maybe as much mental as physical. Who knows.

That’s incredibly bad advice, as we’ve seen in plenty of NBA cases over the years (Bill Walton’s is perhaps the most notable example, where doctors insisted he was fine and he was anything but, but he’s far from alone), and it’s made much worse by Bayless having no medical background. But that’s far from the only hot take he dropped this week. As usual, there was complaining about LeBron:

Cavs survive Orlando 104-103 despite a shockingly shaky last 3 minutes by the Best Player on the Planet and thanks to a foul call Isaiah got on Mack that looked like all ball. But hey, at least Isaiah can make HIS clutch free throws.

And there was the way, way preemptive declaration that Vikings-Saints was over:

This game is, unfortunately, OVER. Congrats, Vikings. One game at Nick Foles away from a home Super Bowl.

Once the Cowboys were eliminated, I picked the Saints to win the NFC and stuck with them after a shaky win at home over Cam. I was wrong. This game turned on the unchallenged wrong spot that should've been Saints ball.

Which he later tried to pass off as a reverse jinx:

I tried the same reverse Twitter jinx I used late in the first half of last year's Super Bowl against the Falcons. I declared this game over for the Vikings at 17-0. It almost worked. It SHOULD'VE worked.

Oh, and Bayless even used all-caps to yell about…his show? The same one he does every weekday?

REMEMBER: UNDISPUTED TOMORROW AS ALWAYS 9:30-NOON E ON FS1. JOIN ME AND SHANNON AS WE DEBATE THIS INCREDIBLE NFL WEEKEND AND CAVS-WARRIORS, LAKERS COACHING RUMORS.

At least Bayless is still providing plenty of scorching takes.

Based on the fact that he was born in Queens, the Mets again, this season, will honor 50 Cent, the vulgar, women-degrading, threat-issuing rapper and recidivist criminal with arrests for crack and heroin possession, multiple gun possessions and domestic assault.

So where is Rob Manfred’s office to holler, “Oh, no you don’t!”?

And if Queens nativism is the standard, why don’t the Mets share their love? Rikers Island must have inmates from Queens who’d like to be, as the song nearly goes, taken out for the ballgame.

Based on the fact that he somehow still has a column, we will honor Mushnick, the out-of-touch, athlete- and rapper-degrading, grumbling old white man and recidivist columnist, with a four-fire hot take.

2. Jeremy Roenick calls Kid Rock “the most talented musician, I think ever, on the planet,” says critics “have their panties so hung up they can’t think even straight”: The NHL’s decision to tab Kid Rock, or Robert James Ritchie, as their featured act at this year’s All-Star Game has proven controversial, with lots of backlash thanks to Ritchie’s endorsement of Donald Trump, his anti-trans speeches at concerts, and even his brief flirtation with running for a U.S. Senate seat. But Roenick’s friends with Ritchie, as you can tell from this incredible fawning over him in the NBCSN interview announcing the gig:

“When I talk to people about you, I say, ‘Kid Rock is the most talented musician, I think ever, on the planet, because you can put any instrument in your hand or on your mouth and you can play anything and rock a house and sing any kind of genre.” I mean, that’s a claim Ritchie isn’t going to even make about himself, and you can see him laugh when Roenick says it. And his self-deprecating “Jack of all trades, master of none” response is a far more reasonable comment than anything Roenick says here. Oh, and Roenick doubled down on his Kid Rock hot takery, going off on critics of the move in a Sporting News interview and suggesting they “have their panties so hung up they can’t think even straight”:

See, this is where I get driven crazy by people today. Why does anything have to do with politics or where he stands with politics when it comes to entertaining and singing to people at a sporting event? It drives me crazy. All these people have their panties so hung up they can’t think even straight. They don’t understand the performance. Entertainment has nothing to do with whether he likes (Donald) Trump or he doesn’t like Hillary Clinton. Let him perform, sing his songs that have nothing to do with politics. All these people have got to stop with this narrative that’s going around and the divide they’re bringing to this country. It’s driving me crazy.

What’s driving me crazy is how a prominent NBC commentator thinks it’s appropriate to use gendered insults like this. (And also how he thinks Kid Rock is the most talented musician ever on the planet.)

1. Stephen A. Smith brings out all the theatrics: Smith, our overall leader here, drops hot takes just about every week, but what really stood out with him this week is how he went completely off the rails with theatrics over pretty mundane topics. The most amazing example of this might have been his 30 seconds of incomprehensible yelling back and forth with Damien Woody about Woody’s time playing for the New England Patriots: 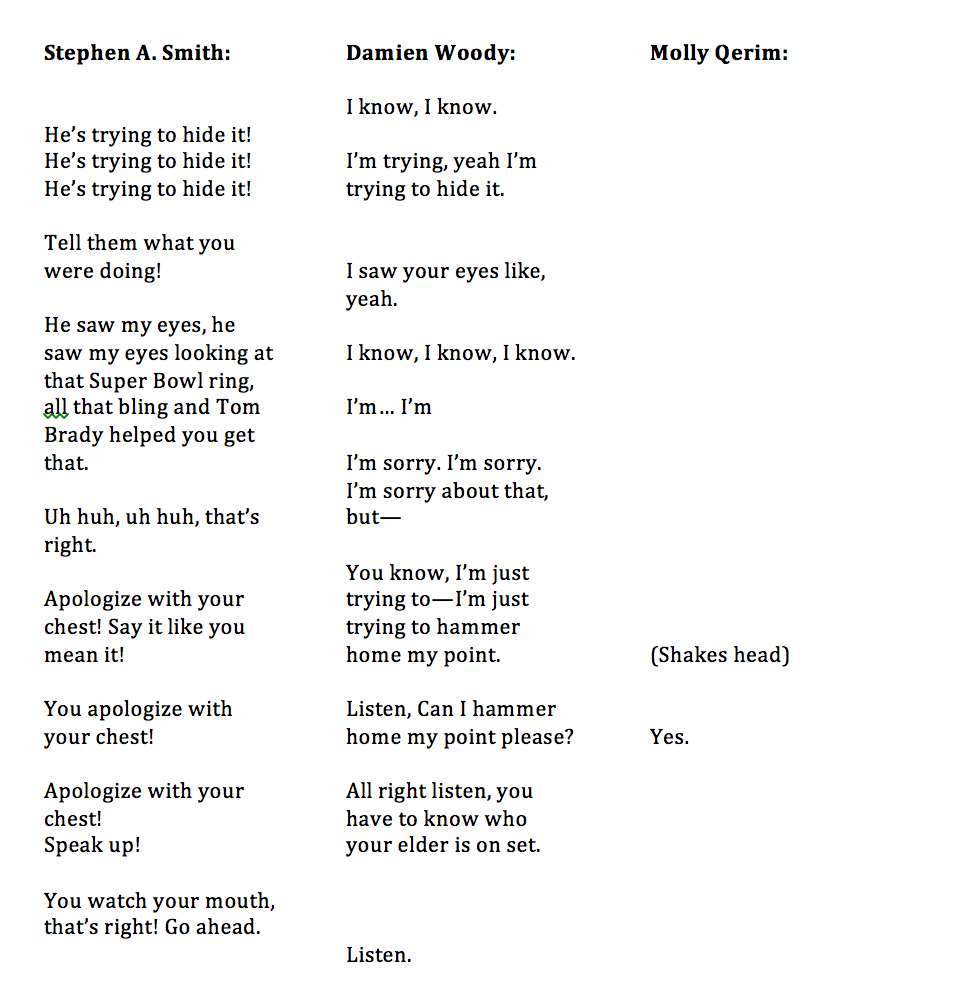 And that wasn’t Smith’s only ridiculous behavior this week. Consider how he almost walked off the First Take set in response to Max Kellerman talking about Tom Brady having more to prove than any other quarterback this weekend:

.@maxkellerman made me almost walk off the set today. https://t.co/s9mK8M5GhU

Consider the lengths he went to in yelling about Brady’s “bogus” hand injury:

Or in yelling about Saints’ safety Marcus Williams:

This mistake by Marcus WILLIAMS — missing that play on Stefon Diggs — May be the absolute WORST MISTAKE I’ve ever seen in NFL Post-Season History. If it’s not THE worst it’s certainly up there. All the man had to do is make a tackle and the game is over. Horrible, Horrible Error.

Or in debating LeBron’s “excuses”:

I haven’t seen overacting like this since the last middle-school play I watched. Smith remains walking proof that if you don’t have anything interesting to say, just say things really loudly and obnoxiously and you may wind up with a multimillion-dollar TV contract. And this kind of overacting can apparently land you spots on ESPN and General Hospital.