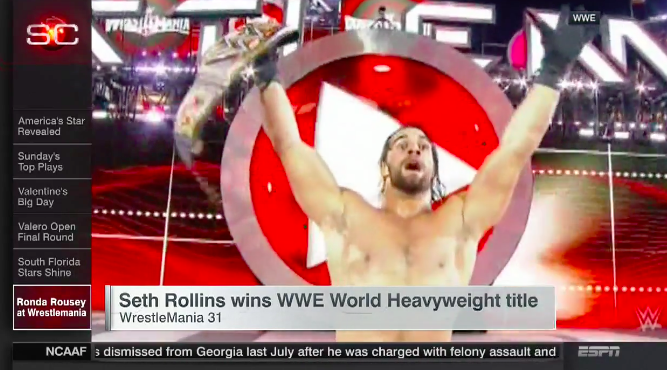 Last week we told you about the beguiling way in which SportsCenter and ESPN had suddenly taken an interest in WWE.  That included Jon Gruden appearing on WWE.com, Bill Simmons appearing as a guest commentator on Raw, and an E:60 special going behind the scenes of the pro wrestling giant.  It culminated in Brock Lesnar announcing to the world that he was re-signing with WWE in an interview with Michelle Beadle on SportsCenter.

The question we raised was whether this signaled a further push by WWE into the mainstream sports world or was just a unique and temporary set of circumstances fueled by the involvement of WWE fans and top ESPN personalities (Simmons and Beadle) and former professional athletes (Lesnar) coming together.  Look around at your favorite sports websites and there’s a good chance you’ve seen an increase in WWE coverage in the last year.  But legitimate WWE coverage on SportsCenter?  That represents a bridge that has maybe never been crossed before.  It’s the most pro wrestling ESPN has seen since the network was airing the last days of the AWA more than 20 years ago when gimmicks revolved around guys who ate lots of pancakes and wrestlers with names like Rocky Mountain Thunder were making their own personal Botchamania tapes before Botchamania was cool.

So with WWE’s marquee event of the year, WrestleMania, taking place last night in the Bay Area, would ESPN continue with their rush of pro wrestling coverage?

The answer was an affirmative yes.

The official SportsCenter social media pages were tweeting out live results from WrestleMania on both Facebook and Twitter throughout the evening.

"Any ring I step into is mine." Ronda Rousey makes her presence felt at Wrestlemania 31. » http://t.co/TCic28X9QI

But wait, there’s more!  If that wasn’t enough, we actually got a WrestleMania highlight package on the evening edition of SportsCenter.  And not just in the throwaway 10 second “here’s a famous athlete roughing up The Authority” kind of way.  We got a full-fledged highlight of the main event with Steve Levy excitingly narrating Seth Rollins cashing in his Money in the Bank briefcase and curb stomping Roman Reigns to win the title.

What kind of dream world am I living in when SportsCenter is covering WrestleMania?  As Gorilla Monsoon would say, history has been made!  It’s just amazing to me that SportsCenter ran a WrestleMania highlight in 2015.  Who would have ever thought that SportsCenter would pay attention to professional wrestling once it removed the veneer of being an actual sport?  Could you imagine if this would have happened in the days of The Ultimate Warrior and “Macho Man” Randy Savage or Ric Flair and Dusty Rhodes?  Could you imagine a SportsCenter breakdown of Hulk Hogan joining the nWo?  Even for someone who can appreciate both the sports and sports entertainment worlds, it’s a peculiar new reality to wrap one’s mind around.

Where does this lead?  Again, it’s hard to fathom SportsCenter and ESPN covering WWE regularly.  I’m not expecting Skip Bayless and Stephen A. Smith to start debating Finn Balor vs Kevin Owens.  But for big events like WrestleMania or big stars like Ronda Rousey crossing over, it makes sense to expand into the world of professional wrestling.  There is lots of room to maneuver in between the camps of “it’s still real to me, dammit” and “you know it’s fake, right?”  There is plenty of crossover appeal for both sides.

Who knows what lie in the future of WWE’s push into mainstream sports.  Maybe we’re not supposed to know.  As Roddy Piper once said… just when you think you know the answers, I change the questions.