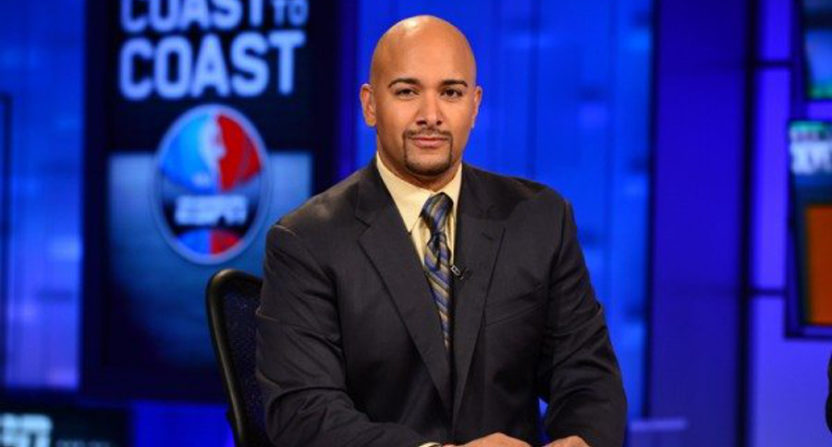 Long-time ESPN personality Jonathan Coachman has left the company. Coachman came to ESPN in 2008 after nine years in a variety of roles with WWF/WWE, and was there until this year, hosting SportsCenter and radio shows and playing a key role in the network’s wrestling coverage. It’s not clear exactly when he officially left, but it’s certainly official now from his tweets. So far, he’s pivoted to doing a daily Periscope show, and has said he has other things in the works and is open to more.

Here’s a look at Coachman’s tweets about his exit.

First, in September, he talked about returning from a six-month “social media/personal recalibration” (it wasn’t a complete hiatus, as he sent occasional tweets and retweeted others during that span, but he wasn’t very active):

In early October, he talked about how that was partly to “remember why I got into this business”

About 6 months to be exact. Reboot. Rebuild. Reinvigorate. Re-member why I got into this business. Have done that. Now I am back. Let’s go. https://t.co/2zQctGNo6k

On Oct. 14, he tweeted about “a LONG list of good ideas that were bypassed”:

Already pitched It. Trust me I have a LONG list of good ideas that were by-passed. Like camera-McGregor-private Jet-@SummerSlam-2016. https://t.co/OBVpC6nFJb

Also that day, he talked about creating his own thing, and having podcast proposals turned down:

That’s nice. But trust me to be anything at the highest level is so very hard. Who knows maybe I will create my own thing? https://t.co/5mC2earbwR

Agreed. You have to understand that when you are under a brand you have to get permission for everything. Even starting your own podcast. https://t.co/xbJxZ7xgVP

On Oct. 17, he posted a “time to have fun again” video to Instagram, and announced that he’d do a daily Periscope show. He also said “We’re going to start talking about sports again, the actual game. The day after the NFL, let’s talk about the games on the field!”

Time to have fun again. And actually talk about the games on the field, on the course, on the court. The business is everchanging and I think a lot of really smart people are doing things in a different way and delivering Smart, inciteful, meaningful content. I have been trying to remember the 7 year old “Coach” who dreamed about making sports his life. And that version is me is who will be driving the bus from now on. I also love a ton of fun things that a lot of people love to banter back and forth about. @bigbrother @realhousewivestv @bachelorabc @bacheloretteabc. So let’s use technology to our advantage and turn our “guilty pleasures” into a helluva a lot of fun. #letsmaketherules. #backtobasics #realtalk #entertainment. Stay tuned.

On Oct. 26, he commented further on issues with ESPN, including them cancelling his “Off The Top Rope” segment:

@TheCoachESPN did you and wwe have a falling out ??

And yet they wonder why people like myself don't watch @espn

it’s been beyond frustrating on my end. great leadership takes vision and creativity. And if those in power lack that..well you see it. https://t.co/sD7AuSZkOo

Appreciate the frustration but calling out the guys who sign the checks is not a good strategy.

probably right. Or maybe we can look in the mirror and be honest and realize real work and changes need to be done. That’s not calling out. https://t.co/TXFsarOi28

I have none. I know how it feels to have rug pulled out from underneath after promises made. It doesn’t feel good. No matter who you are. https://t.co/02FHhs6wRX

@TheCoachESPN is absolutely ripping ESPN! I’m glad to see one of their employees express their frustration with the company’s failure

Haven’t ripped anyone. I have pointed out some obvious things. can’t act like they don’t exist if we all in the media want to get better. https://t.co/AQSnkmJxyQ

That’s perhaps particularly notable considering the back and forth of ESPN’s WWE coverage, which has at times incorporated a vertical, regular SportsCenter segments, and now a 30 for 30, but has also taken some criticism, including from public editor Jim Brady. The company seems to have gone back and forth on how much they want to do WWE things, and that may have been part of Coachman’s exit.

It’s also interesting that he’s retweeted some comments that were quite critical of ESPN:

Good for you coach. ESPN hires talent, let them SHOWCASE their talent. This is literally leadership 101. Sad ESPN stopped doing that.

After that, Coachman discussed his Periscope show:

@TheCoachESPN this is what I missed when you were off twitter, love how interactive you are with us.

Yep. And more to come. Going to do periscope show everyday to discuss topics and sports that you the fan want. Like maybe actually the game https://t.co/erasGxq26z

And mentioned he was shooting something for WWE Network:

Yo, @TheCoachESPN any chance you do something with @WWE again?

Don’t know if full time but I am shooting a show next week that will air later in November on @WWENetwork. Can’t wait for that. https://t.co/u2b8HEtr4z

Here’s one of his first Periscope shows, from Oct. 30:

I can’t believe I decided tonight to play drinking game every time Gruden says “unbelievable”. I am incredibly drunk in only 3rd qtr. Lol

When I watched I was thinking same blueprint as Clay. Love this way more than ESPN/FS1…gives y'all more freedom for honesty.

This week, he talked about being back on TV with “several projects in the works”:

@TheCoachESPN Coach, are you going to be back on TV anytime soon? Or is online your new gig?

Yes I️ will be. Several projects in the works. When I️ can discuss I️ will. But it was just time to leave espn. Professional and personal reasons. But I️ feel great and this show is for fun and to stay sharp. https://t.co/zw0Y9omDUj

@TheCoachESPN did not know you weren’t at the Mothership anymore. Huge fan Bro. My boys and I admire your work.

Thank you brother. There comes certain times in life when you have to make a change. My vision is totally different from certain people there. Not all. Too many good ideas to keep hearing no. And you will see them soon. https://t.co/HLuMOoh2IA

@TheCoachESPN so with Apple buying/creating shows, any chance you explore getting your own sports show with them? They’re gonna need a sports outlet!

Absolutely. You have to evolve and think outside the box. Which is now inside the box. My biggest problem is with leadership in any company that is too stubborn to think like this. Trust me I am on it. https://t.co/togfTw5XuX

He also discussed changing his Twitter handle to a new company:

Can’t change it until I am allowed to put it in my handle. When the time is right I will. Going to be cool though the next steps https://t.co/h0lhD8GIZU

He’s continued to retweet other comments critical of ESPN too, like this one:

I'm relieved to see that @TheCoachESPN has left ESPN. That company continues to go down and God forbid anyone with talent, like Coach, propose new and enlightening ideas to elevate the company further. Hope to see you in the @WWE again, Coach! God bless!

It’s definitely interesting to see Coachman directly engaging with fans on Twitter and now on this daily Periscope show, and it’s also notable to hear some of his comments about ESPN’s leadership or lack thereof. We’ll see where he lands next.