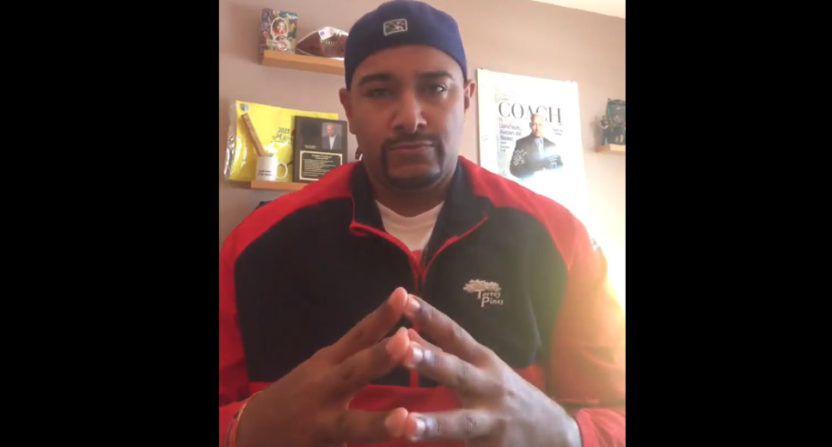 When Jonathan Coachman tweeted about his exit from ESPN after almost 10 years and started doing a daily Facebook Live and Periscope shows this fall, he said there was “more to come.” Some of that has now dropped, with the Golf Channel announcing Thursday that Coachman will provide play-by-play commentary for all five World Long Drive events they’re televising this year. Coachman tweeted about the move as well:

Breaking news: I told you I was bringing all my worlds together. Thrilled to be on board for the fastest growing sport at the @GolfChannel. Let’s tell stories, create stars, and have fun. See you on the road to Oklahoma. pic.twitter.com/cudGiwxVFv

He also tweeted out a video of him commenting on the move:

Also a big shout out to the @GolfChannel and @WorldLongDrive for evolving and embracing the future. It’s about creating stars and that’s exactly what we are going to do. #keepitonthegrid pic.twitter.com/fltiIM0cBU

“I try to tell you, if you do things the right way, it can make sense and worlds can collide. THRILLED to be a part of the Golf Channel family, the World Long Drive family. Five events this year, starting in April, ending in September. I gotta tell you, we’re going to create stars, we’re going to create personalities, a bunch of 400-yard drives, and who knows, maybe along the way, a little fun too. See you on the road to Oklahoma.”

The five televised World Long Drive events will be the Clash in the Canyon in Mesquite, Nevada from April 21-24, the Ak-Chin Smash in the Sun in Maricopa, Arizona from May 11-15, the Atlantic City Boardwalk Bash in Atlantic City, New Jersey from June 4-5, the Long Drive Classic presented by Niswonger Children’s Hospital in Kingsport, Tennessee from August 12-13, and the Volvik World Long Drive Championship in Thackerville, Oklahoma from Sept. 1-5. So we’ll see Coachman back on TV for those events, and it will be interesting to watch and see what else he winds up doing.

We do also know that he’ll be part of the WWE Raw 25th anniversary show this coming Monday:

BREAKING: @TheCoachrules has confirmed he will be at the Manahattan Center on #RAW25 !!! @WWE give him the stick and let him work his magic !!!! Follow us @coachscrew and watch “Coach Em Up” on #Periscope every weekday morning 730 EST/630 CST!!! #Worldwide

Great to see that an integral part of the history of "the longest running weekly episodic program on TV" will be a part of #RAW25! Can't tell the story without him. Congrats @TheCoachrules! https://t.co/d84g5so4O4

@TheCoachrules they just listed a bunch of people who will be at raw on Monday and you werent on there. Did you decide against going?

I will be there. I guess they didn’t think I was big enough to include in the announcement. So I announced it myself this morning on my @facebook live and @PeriscopeCo show. If you don’t promote yourself no one will. 🙂 https://t.co/kDUtsdkzp6