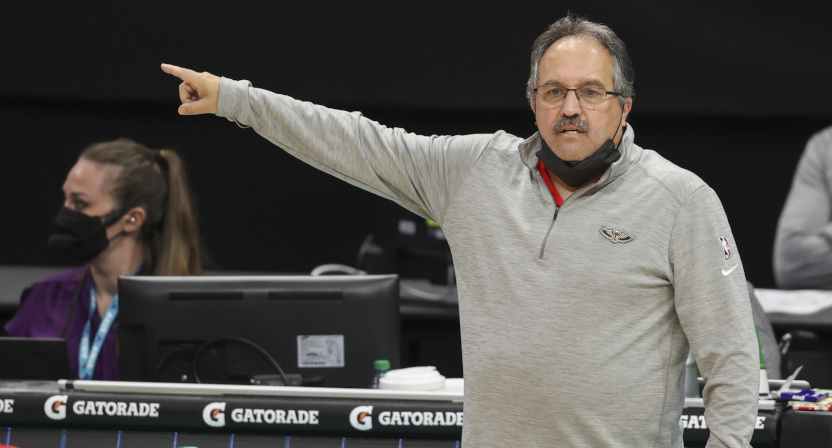 A notable thing in broadcasting is that most former players and coaches tend to find one network and stick with them. But that’s not the case with former NBA coach Stan Van Gundy, who first joined ESPN in 2018 (after an aborted 2012 move there that then-commissioner David Stern reportedly nixed), then moved to Turner Sports in 2019 and spoke about how much better of a fit that was. Van Gundy then left Turner to take a coaching job with the New Orleans Pelicans in October 2020, but was fired by that team this June, then rejoined Turner a couple months later. He’s calling TNT’s first opening night game (Nets-Bucks) Tuesday night, and ahead of that, he spoke to media members (along with fellow NBA on TNT analyst Reggie Miller) on a conference call Friday. On that call, in response to a question from AA, Van Gundy (seen above with the Pelicans in May) said he told his agent Turner was the only broadcasting opportunity he really wanted to pursue.

“The first step for me wanting to get back into broadcasting was [Pelicans’ executive vice president of basketball operations] David Griffin firing me. That was step number one. But once I got fired, I told my agent, he contacted me, and I said ‘Yeah, I would like to do it again, but the only place I want to work is Turner.’ Number one, my experience with them over the year at Turner and NBA TV was outstanding.”

Van Gundy said his previous time at Turner left him with plenty of fond memories.

“They treated me really, really well. I liked not only the other broadcasters and things, but the people behind the scenes, the producers, the directors. The atmosphere is great. And it’s great for me to be able to be around the game and still be out there every night. And quite honestly, it’s a lot less stressful.”

When asked by Barrett Sports Media’s Ricky Keeler about how he sees his game analyst role, Van Gundy said he still views himself as a work in progress as a game analyst. He said his Turner colleagues have done a lot to help him improve.

“With me, it’s a lot different. Reggie’s been at this a long time, he’s a lot better at it than I am. This is my second year, really, of doing it. I’d done some college stuff in between other jobs. So I’m just trying to learn, and get better every day. And hopefully, every game I do, I’ll be a little bit better.”

“I try to focus on two things. One is I try to make sure that I’m really well-prepared going in, that I know the teams I’m watching, that I’ve watched them play recent games on film, that I’ve spent time looking at all the numbers and everything I can. And then the second thing is, I ask for a lot of feedback, particularly from the play-by-play guys I work with.”

“I started working at Turner two years ago with Ian Eagle, and he’s not only a great play-by-play guy, but a great coach, and he gave me a lot of help in that regard. And then in the bubble, I also worked with Spero Dedes and Brian Anderson, and they gave me a lot of help. I worked the other night with Kevin Harlan, and just asking those people to give you feedback, and the same with the producers and directors.”

Van Gundy said he always wants honesty from his coworkers, and Turner provided that.

“I said earlier that players if they want to be great want to be coached, want to be told the truth. I think it’s the same in anything. I don’t want just people telling me ‘Great job’ when it wasn’t. Tell me what I can do to get better. And that’s something I’ll continue to try to do all year to validate the confidence that Turner has shown in me to give me this opportunity.”

When Sports Media Watch’s Jon Lewis asked about Turner versus ESPN, Van Gundy clarified that he didn’t specifically turn down ESPN, but that he told his agent he was only interested in going to Turner.

“Nobody contacted me from ESPN. But I just let my agent know right off the bat. It’s just personal experience. I went from ESPN to Turner, and number one, I was flattered by Turner’s interest, but number two, Turner gave me a defined role, I knew what I was going to do. ESPN, I was just up in the air, I was just sort of bouncing around. I’d do the morning shows up in New York and fill on their studio show when somebody was out. I was just bouncing around. They offered me a more defined role at Turner.”

“And I just really liked, I’m not saying this against anyone, but I just really liked the way Turner treats their people. And what Reggie has said [about the Turner family], he’s been there a lot longer than I have, but that’s been my experience. Everybody cares about each other, it’s really a team environment. I just really enjoyed it. And if I was going to get back into doing this, that’s the environment I wanted to be in. At Turner, I haven’t experienced any infighting or jealousy or any of that stuff. It’s just people wanting to do a good job and trying to present the NBA as well as we possibly can. And that’s what I want to be a part of.”