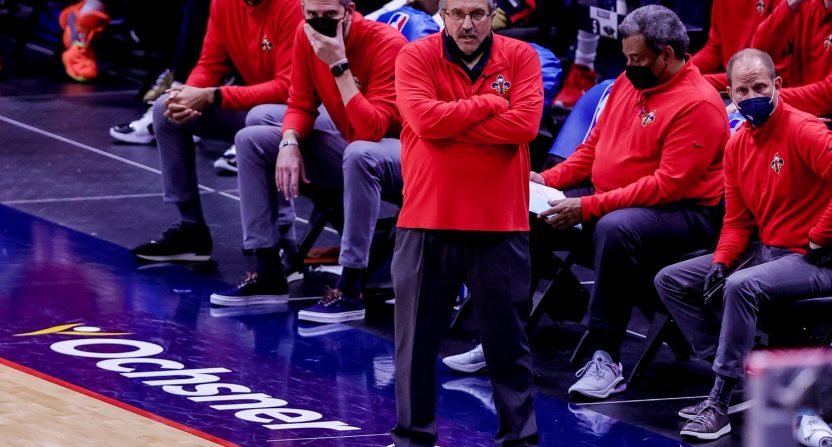 On Wednesday, the New Orleans Pelicans and head coach Stan Van Gundy parted ways, less than a year after his hiring.

Van Gundy left Turner Sports in October to take the Pelicans job, and was one and done with the franchise after a 31-41 season.

His departure, naturally, will result in Van Gundy being linked to TV jobs. The 61-year old has worked as an analyst for both ESPN and Turner Sports, and a return to either company would make sense.

Turner would seem the more likely suitor, as they employed Van Gundy prior to his departure for the Pelicans job. He was only with Turner for a season, joining in the summer of 2019 and settling into a nice groove at the start of the 2019-20 season before the pandemic derailed the world. At Turner, Van Gundy had a more defined role than he did at ESPN, which he explained in a 2019 profile written by former AA writer Shlomo Sprung.

“I didn’t really have one, specifically,” Van Gundy said over the phone. “I didn’t know when I would be working until a couple of weeks in advance, most of the time. It was basically either go to New York and go on the morning shows or go to L.A. for NBA Countdown when one of their main panelists were not there for some reason, had to do something else.”

Van Gundy also had a somewhat tumultuous history with ESPN before joining the company. The NBA reportedly blocked ESPN from hiring Van Gundy in 2012, and during his tenure with the Pistons, Van Gundy threatened to boycott media responsibilities with the network because of a story containing quotes from LaVar Ball (remember him?!) critical of then Lakers coach Luke Walton. That controversy eventually blew over, and Van Gundy joined ESPN after the Pistons let him go following the 2017-18 season.

Another possibility that now could be on the tale for Van Gundy that wasn’t a year ago is Meadowlark Media, the John Skipper/Dan Le Batard startup that has been bringing in talent seemingly each week. While at ESPN, Van Gundy had a weekly role on Le Batard’s radio show, and he apparently enjoyed it very much. Here’s another blurb from that profile we ran a couple years ago.

“I really did love doing Dan [Le Batard]’s radio show,” Van Gundy said. “So that was tough, but it wasn’t enough to supersede the broadcasting end of it being better, the NBA end of it. Dan’s a good friend and I’ve become friendly with everyone on his show. It was once a week of just pure enjoyment for me.”

If Van Gundy wants to get back into the media world, it sure seems like he’ll have options.