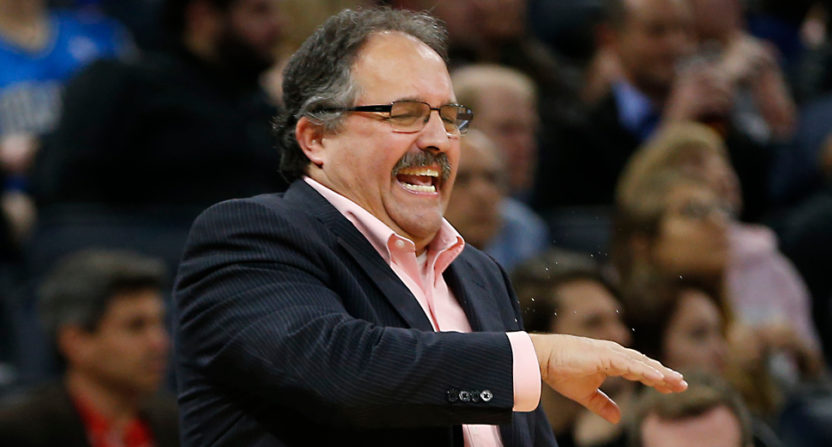 ESPN’s story Saturday about LaVar Ball’s comments on Luke Walton has sparked a whole lot of backlash, from Dallas Mavericks’ coach Rick Carlisle blasting the network in comments and a National Basketball Coaches Association statement as well as a report that some NBA coaches would ask their media relations staffers to pull credentials from reporters who interview Ball (ESPN-affiliated or not). Now, Detroit Pistons’ coach Stan Van Gundy has weighed in, and done so in perhaps even a stronger manner than Carlisle.

As per Vince Ellis of The Detroit Free Press, Van Gundy called ESPN’s decision there “cheap (expletive)” and “a cheap shot” and said they “showed total disrespect.” He said “I got a problem with ESPN deciding that’s a story.” And most notably, he sent an e-mail to Carlisle, the NBA Players’ Association and NBA commissioner Adam Silver. That e-mail saw him directly threaten to not participate in production meetings or in-game interviews with ESPN during their Jan. 19 Pistons-Washington Wizards matchup. Here’s more on that from Ellis’ piece.

“I’m not meeting with their announcing crew before the game, I’m not doing the in-game interview,” Van Gundy said. “I’m not going to participate in the thing.”

When pressed if it means he’s threatening to withhold access, Van Gundy said: “I’m not denying them access. I’m not kicking them out of press conferences. They want extra stuff from us and they’re going to treat an NBA coach with that little respect? Then I’m going to choose not to give them extra access.”

Does he expect the league or ESPN to address concerns?

“We’ll see what happens. What the league decided to do yesterday was put it on NBA.com.”

It’s going to be interesting to see if there’s any reaction from ESPN. After all, they’re paying a massive amount of money (an average of $1.4 billion annually) for NBA rights, and with that, there are probably some expectations about the level of access they get. And if they have complaints about this, they may wind up going to Silver and trying to have him intercede with Van Gundy, which could provoke backlash of its own from Carlisle and the NBCA.

Of course, Van Gundy may reconsider either on his own after cooling off a bit or after a little pressure from the league and/or ESPN, or ESPN might decide they can do without production meetings and in-game interviews with Van Gundy for one game. (They manage with pretty limited interviews with the likes of Gregg Popovich, after all.) But if this boycott becomes a reality and ESPN gets upset about it, that could create some interesting tensions between the broadcaster, the league and the coaches. (Also, this particular boycott could make things awkward for Van Gundy personally, as his brother Jeff is one of ESPN’s lead analysts.)

If this isn’t resolved peacefully, this might wind up being one of the larger access controversies in recent years. It’s fascinating that we’ve wound up here from an ESPN college basketball reporter flying to Lithuania and printing something LaVar Ball said about Luke Walton. And it’s fascinating that this is what drove NBA coaches to turn on both LaVar Ball and ESPN. NBA coaches get criticism regularly, from fans, from columnists, and from radio hosts, TV personalities and more. But apparently LaVar really hit a nerve with this one, and caused some of these coaches to take highly unusual actions.