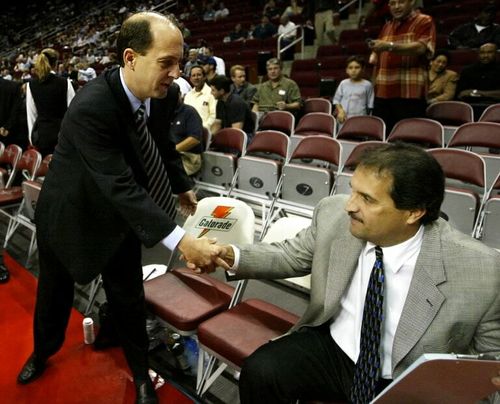 The story of Stan Van Gundy's almost-employment with ESPN has been one of the most remarkable sports media stories flying under the radar this year.  Initial reports from TBL were that Stan Van was ready to join ESPN's NBA Countdown until NBA Emperor David Stern stepped in and put the kibosh on his hiring because of SVG's outspokenness criticizing Stern and the association.  That led to SVG blasting ESPN for lying about pulling their offer and another uneasy situation with a league pulling the strings on what their network partners can and can't do.

Caught in the middle is ESPN's top NBA analyst Jeff Van Gundy, who as you may know also happens to be Stan's brother.  What would JVG have to say about the NBA, the league he covers, blocking the move of his brother to the network he works for?  As you'd expect, JVG didn't pull any punches in speaking with USA Today about his shock over what happened and the impact it has on his own job in telling the truth when covering the NBA…

"And then something changed. There's certainly circumstantial evidence that something from the outside — presumably the NBA — changed (ESPN's) thinking. … I was happy when they came to an agreement and shocked when they pulled their offer."

"As a broadcaster of the NBA, it give you pause… How forthcoming can you be? You don't want your honesty to cost you a chance at employment.This is a shot across the bow."

"This is an organization that's treated me great. But this raises interesting questions about what a (league-network) partnership means. You have to realize, as a fan, you're not getting the whole truth. … It seems like there are certain people in each sport that (TV) can't criticize, or you can't criticize the league itself. That's what impressed me when (ESPN's) Mike Tirico and Jon Gruden criticized the NFL over replacement refs. That (Commissioner) Roger Goodell didn't throw a hissy fit at ESPN was impressive."

This needs to be a bigger story than it is.  A sports league hasn't acted this heavy-handed in dictating what their network partner did since the NFL shut down Playmakers.  It's simply ridiculous for David Stern to be able to handpick who covers his sport for ESPN and for ESPN to willfully play along with this charade saying it was their decision alone.  But hey, if Stern gets to play kingmaker and decide which players get traded where, deciding broadcasters is a drop in the bucket.

Clearly, somebody is not telling the truth, and I have little reason to believe Stan Van Gundy would make up a story about all this nonsense.

Jeff Van Gundy is one of the best analysts around because of his brutal honesty and willingness to criticize when warranted.  I have no doubt Stan Van Gundy would have been excellent as an NBA analyst as wel.  If that outspokenness is taken away for fear of David Stern's shadowy figure lurking in the bowels of any NBA arena, it hurts everyone involved.  It hurts JVG, it hurts the legitimacy of the network, and it hurts fans because they aren't getting the full truth.

If the analyst for the NBA Finals has pause in being forthcoming with his own analysis, how can any viewer fully trust ESPN's NBA coverage or the league itself?  How can we be sure the league is being covered in an open and honest way?

One thing is clear – the best friend any NBA conspiracy theorist had claiming the league and everything in it is fixed is David Stern himself.