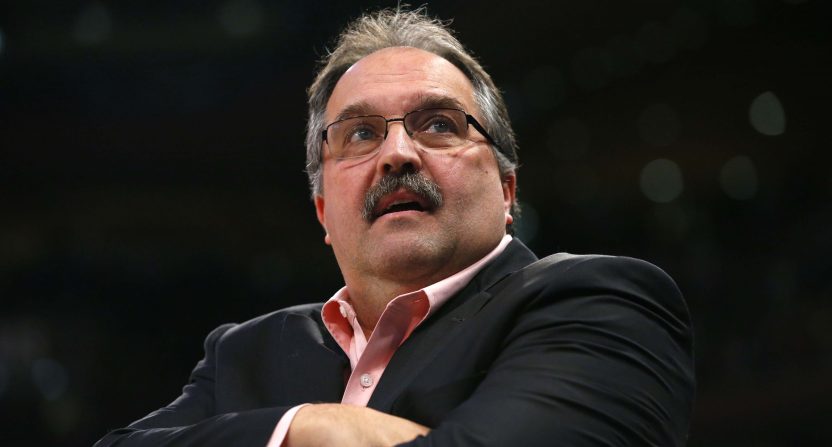 After a year taking on a variety of basketball analysis roles for ESPN, Stan Van Gundy has found an ideal, more defined role at Turner Sports. The former Detroit Pistons, Orlando Magic and Miami Heat head coach will be spending two nights a week in Atlanta as an NBATV analyst and will be calling weekly games for TNT beginning in late January when the Turner adds a weekly Tuesday night doubleheader to its game package.

Van Gundy, 60, said he enjoyed his time at ESPN and met a lot of good people both in front of and behind the camera. But his role there was a lot different than what it will be with Turner.

“I didn’t really have one, specifically,” Van Gundy said over the phone. “I didn’t know when I would be working until a couple of weeks in advance, most of the time. It was basically either go to New York and go on the morning shows or go to L.A. for NBA Countdown when one of their main panelists were not there for some reason, had to do something else.”

Van Gundy also got to work a few college basketball games, and said he appreciated the variety of things he was given to do at ESPN, with a caveat.

“I had a lot of friends of mine say ‘hey, I like watching you on TV, but I never know when you’re gonna be on.'”

Van Gundy’s contract with ESPN had expired, and after a period of time where he wasn’t allowed to negotiate with other networks, he gave his agent two things he wanted most in his next job: a more definable role and the chance to call games. More than one network expressed interest, but when his agent came back in August and said Turner was one of those parties, Van Gundy was pleasantly surprised.

“Certainly in recent years, Turner’s analysts have been— other than Mike Fratello— virtually all former players,” he said. “And so I never really looked at them myself going into all this as a realistic option. Turner had so much to offer in terms of the quality of what they do and in terms of opportunity for me. I came away a little bit surprised that things worked out as well as they did.”

The toughest decision in leaving ESPN for Van Gundy was giving up his trips not to New York or Los Angeles, but a weekly segment associated with a personality based in South Florida.

“I really did love doing Dan [Le Batard]’s radio show,” Van Gundy said. “So that was tough, but it wasn’t enough to supersede the broadcasting end of it being better, the NBA end of it. Dan’s a good friend and I’ve become friendly with everyone on his show. It was once a week of just pure enjoyment for me.”

Even after a coaching career that spanned more than 35 years, Van Gundy said he had no inclination to retire. Being 60, he said, is still too young to be doing nothing the rest of his life, and he still wants to be close to the game.

“And if I can’t coach, this is as close as I can get,” he said. “And I think I guess the viewers will be able to comment on this more as the season goes on, but I feel like I have something to offer.”

And now those viewers will indeed know when Van Gundy will be on their TVs, laptops or mobile devices. He had a chance to tape some NBATV team preview segments with hosts Stephanie Ready and Matt Winer and analysts Steve Smith and Dennis Scott.

“Very good, very efficient,” he said of the process. “Not trying to direct you in what to say and what not to say, and not even needing to know what you’re going to say ahead of time. It was pretty free-wheeling, and you’ve got a lot of freedom, autonomy, to really express your views. Their reputation in the industry’s outstanding for the way they treat people and treat their staff and things like that, their production quality on games and their studio shows is great.”

Turner decided to do away with its infamous Players Only concept and announced it would use Ian Eagle and Brian Anderson on play-by-play and Van Gundy and Jim Jackson for its TNT Tuesday night package. Neither Van Gundy nor a Turner spokesman were sure what the broadcaster pairings will be. Van Gundy is in the process of settling into a nice routine at NBATV, one that he’ll get to do every week, knowing he got everything he was looking for in terms of an employer.

“I got an ideal situation for myself here,” he said.