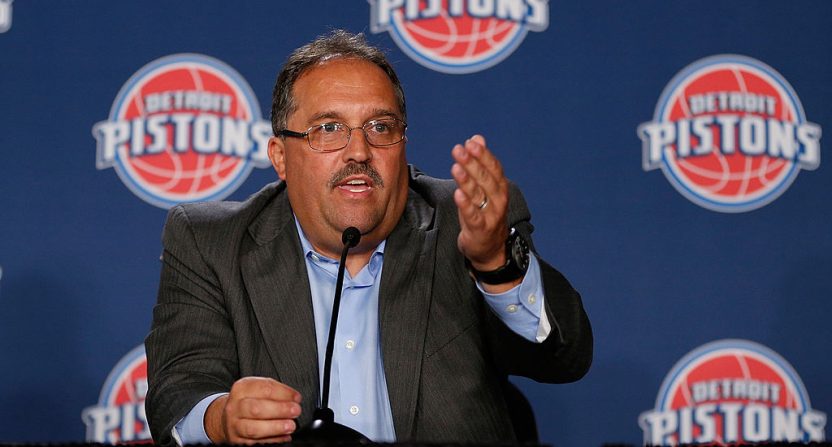 “If you can’t beat ’em, join ’em.” That line’s been around in some form for almost a century, traced back as far as Senator James E. Watson in 1932, and it’s pretty apt for the latest Stan Van Gundy news. As per Andrew Marchand of The New York Post, long-time NBA head coach Stan Van Gundy (most recently head coach and president of basketball operations with the Detroit Pistons; they parted ways this spring after four years) is set to join ESPN as a NBA studio analyst across their shows. That’s pretty remarkable considering the way Van Gundy tried to boycott ESPN interviews in January in anger over a Jeff Goodman piece where LaVar Ball criticized Los Angeles Lakers’ head coach Luke Walton.

That piece sparked anger from plenty of NBA coaches (including Dallas’ Rick Carlisle, who also bashed it in a National Basketball Coaches’ Association statement) and even analysts like Dick Vitale, and it led to some rumblings of coaches possibly pulling credentials for writers who interviewed Ball. But the only actual threat of an ESPN boycott came from Van Gundy. He later backed off it, but still, having that threat out there and then joining the network is pretty unusual. And it’s not the only time controversy has flared between Van Gundy and ESPN.

As Marchand notes, back in 2012, ESPN seemed set to hire Van Gundy for NBA Countdown, but the network backed out of the apparent deal and said there were issues in the final stages of negotiations, issuing quotes like “Ultimately, we differed on potential assignments and we moved in another direction.” Many, including Van Gundy himself, thought that was about NBA commissioner David Stern stepping in to block the hire of such an outspoken figure. And Van Gundy went on Dan Le Batard’s radio show (Le Batard was hosting Highly Questionable and appearing on other ESPN programs at that point, but his radio show was still on 790 The Ticket, not ESPN Radio; it moved there in 2013) and claimed ESPN was lying:

We actually did agree on a role, but then they came back and pulled that. That’s when we knew something was up.

…What I find fascinating … you have to give David Stern and the NBA a lot of credit … ESPN pays the league, and then the league tells them what to do. It’s more ESPN’s problem. You gotta have no balls whatsoever to pay someone hundreds of millions of dollars and let them run your business.

Just say what happened. Who cares? Who cares if I’m on there or not. Just come out and say this is what we decided and why … [ESPN’s quote] that’s just a flat out lie. Why would you do that? I don’t understand. We agreed on something, you changed your mind and pulled the offer. Don’t say we couldn’t come to an agreement. We did.”

ESPN has previously shown that even napalmed bridges can be repaired, though, sometimes multiple times. And while some at the network may not be thrilled with Van Gundy’s previous comments, that doesn’t matter all that much if they think he can provide value to their shows. And that very outspokenness may be an asset there. Meanwhile, from Van Gundy’s standpoint, ESPN might be the best option out there right now; he hasn’t landed another NBA job, and he’s 59 and coming off four pretty disappointing years with the Pistons, so there might not be many great offers for him any time soon.

And studio analyst might be a better fit for Van Gundy than game analyst, and ESPN’s the main game in town there. Turner’s studio roster seems pretty set right now (and also is mostly used around games, while ESPN perhaps has daytime NBA places for Van Gundy as well with things like The Jump, SportsCenter and Get Up), and while Fox does have a few NBA analysts, they don’t have NBA rights and mostly use those guys for occasional appearances on their debate shows. So if he can put aside his previous squabbles with ESPN, maybe this could work for both sides. We’ll see if the deal does indeed come to pass, and if so, how Van Gundy does in his new role.