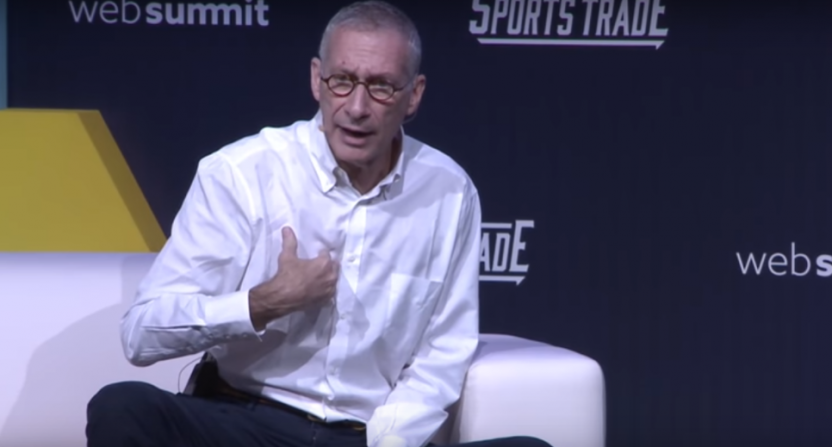 A more useful corollary to oft-stated advice like “Dress for the job you want” may be “Publicly share opinions for the job you have.” Less than a year ago, John Skipper was the president of ESPN, with a new contract extension to boot. In that role, he made plenty of comments about a bright future for pay TV in general (one example comes from January 2016) and for ESPN in particular (one example comes from last December, where he talks about the importance of ESPN’s growing streaming numbers, but also reinforces how important linear TV still is to them). Now, he’s making some rather different remarks on that subject, and that may have a fair bit to do with the role he currently holds.

Six days after that December interview, Skipper suddenly resigned, citing a substance addiction; as per a March interview with Jim Miller, that was over extortion from a cocaine dealer. Skipper then landed at Perform Sports Group/DAZN (his official title is now executive chairman of the DAZN Group). He’s done a wave of interviews this week about DAZN’s place in the sports media landscape, talking with Peter Kafka of Recode and with former ESPN colleague Jemele Hill at the Web Summit in Lisbon. Here’s video of the Hill interview and audio of the Kafka interview, both of which include Skipper criticizing pay TV in a way he (understandably) didn’t seem to do at ESPN.

Some key comments from the Hill interview, as transcribed by Sports Radio PD:

“If you’re watching on cable or broadcast television, it is so anachronistic that it still relies upon Nielsen ratings, which are done on a sampling technology so that it infers that X number of people watched. They don’t really know how many people watched, and they don’t have any idea who in the house is watching. They have no idea, really. They know when the television set was cut on. They know when it was cut off. And maybe someone’s watching, or maybe they’re in the back yard gardening while the TV set is on. We know when someone’s engaged. We can then do things to make that experience better.”

“We will not run 30-second ads in pods of 5-6 of those so they see the same car ad 14 times in a 3-hour game. We will not interrupt games in a way that are unnatural, the way they do on television. I know this because I negotiated it: We had the rights to run 78 commercials during the average American football game. That is a lot of commercials to watch. What we will do is figure out a way to integrate content into the production.”

And from the Kafka interview, as transcribed by Recode’s Eric Johnson:

“We think we can create a different business model, which is going to be the business model in the future, take advantage of that interest, go in a direct consumer relationship with the fan, get data from the fan, create new ad models.”

“We think we’re a first mover in a lot of places. This country will move last because you have more big sports media companies with more money as part of big overall conglomerations. You have the highest penetration of paid television in any country in the world by far. And that’s going to decline slowly because there lots of big companies invested.”

“…To have only bidders, broadcast and pay and cable television companies who are facing very, very significant issues with their two streams of revenue to have them as your only bidders I don’t think is a comfortable position for them to be in. They’d like new bidders. I think they would like DAZN to be a bidder.”

Of course, Skipper was already talking about the challenges with Nielsen ratings and if they were properly reflecting streaming audiences while still at ESPN, so that’s not entirely new. But it’s interesting to hear him making such critical comments about the business model of TV networks so soon after running one. And some of his remarks, from the Web Summit in particular, seem open to a couple of challenges. “We know when someone’s engaged” doesn’t really seem true, especially as related to someone turning the TV on and going gardening, as they can also turn on a streaming service (on a computer or a TV) and go gardening.

It’s also unclear just how much insight DAZN will be able to gain into its customers and if that will really help them serve better ads. Yes, they can presumably pull things like location from members’ billing addresses, but location alone doesn’t mean much. And especially at a point like this where DAZN’s main U.S. offering is boxing, they’re not going to find much revelatory from viewing habits; they may be able to target one kind of ad to boxing fans and one kind of ad to soccer fans, but there are huge differences from one boxing fan to the next.

Also, Skipper cites Facebook and Google as examples to follow here, but anyone who spends any amount of time online knows how wrong Facebook and Google still often are with their targeted ads, and they have far more information on their users than DAZN will (presumably) be able to get. Moreover, Skipper’s right that the traditional ad blocks on sports TV have issues, but it’s notable that leagues and networks (including his former employer) are rapidly altering their own patterns there. And some of that includes efforts to “integrate content into the production,”  just as he’s hyping here. Yes, there are still traditional ad blocks that can still be criticized this way, but the networks are shifting as well, and some of Skipper’s comments relate more to the way things have been than the way they currently stand. Oh, and on that front, the areas where he’s praising streaming services tend to also be applicable to ESPN+, which is far larger than DAZN in the U.S. (but not worldwide, as he’s keen to note) and currently has far more rights at a lower cost.

Is Skipper completely wrong about any of this? Not necessarily. He’s a smart guy who’s run several big media companies and given a ton of interviews over the years, and he’s very careful with his public comments. He doesn’t appear to say anything in either of these interviews that’s completely and obviously refutable, or anything that’s a 100 percent contrast to remarks he previously made while at ESPN. But all of his remarks should be considered in the context that he’s currently running a subscription sports streaming service and not a TV network. Thus, he has a whole lot of reasons to be optimistic about the standalone streaming landscape and critical of the pay-TV landscape.