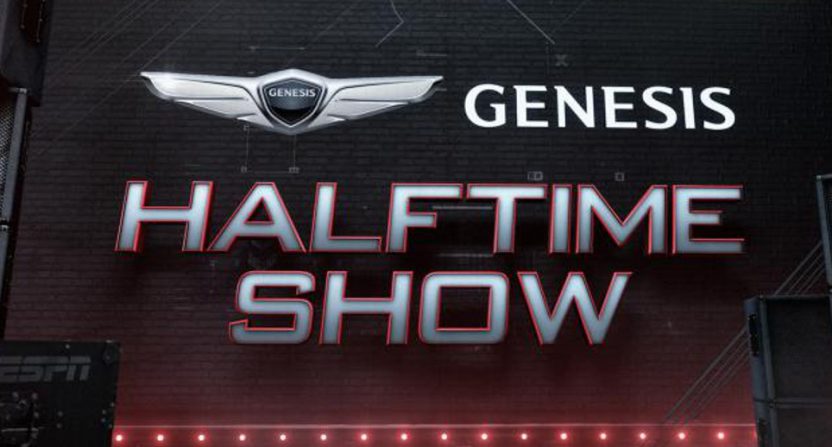 We’ve seen some shifts in approaches to sports commercial breaks over the past few years as advertisers and networks look to both keep viewers more engaged, from occasional commercial-free broadcasts (of events like Big East basketball and F1 races) to single-advertiser superpods (including some sponsored analysis) on NBA games to sponsored analysis segments on baseball broadcasts to fewer breaks, split-screen ads and no commercial-kickoff-commercial sequence in the NFL. But one of the highest-profile changes yet is coming to ESPN’s Monday Night Football NFL broadcasts, or more specifically, to the halftime show. As Anthony Crupi reports at Advertising Age, the halftime show this year (sponsored by Genesis, Hyundai’s new standalone luxury brand) will feature musical segments tied to wherever the game is being played, but even more notably, it won’t have any traditional commercials:

ESPN will air zero commercials between the final whistle of the second quarter and the start of play in the third. Genesis will be incorporated into the halftime show through a number of branding elements, including on-screen graphics, desk signage and tune-ins.

…”What we’re looking for is to create awareness for our brand by putting culture at the forefront of our media strategy,” says Manfred Fitzgerald, executive VP and global head of Genesis, who adds that sports and music are definitive aspects of the American experience. “I’m not a fan of doing things the traditional way, and when we were presented with this opportunity, we thought we could bring this to life in a way that brought together elements of marketing and music, of art and performance.”

…”I was really excited by the concept Manfred put forth,” says Ed Erhardt, ESPN’s president of global sales and marketing. “So we’re changing up the format and adding a good deal of upside to the viewer experience with a new commercial-free presentation that includes a unique musical element.”

This sounds most akin to the T-Mobile sponsored Unlimited Baseball Breaks, which replaced traditional commercials with on-broadcast mentions of the sponsor and throws to analysts in specific sponsored segments. A sample of that can be seen here. But the Monday Night Football halftime show is a much bigger platform to do this on, and it’s interesting how they’re also doing this with musical elements.

Those musical segments will be focused on the home team’s city, with artists connected either by geography or genre performing either live or in segments previously recorded at local venues. In Week 1 Monday, the halftime show of the early Jets-Lions game will feature Boyz II Men and Tori Kelly combining for a tribute to Detroit native Aretha Franklin. And segments like that might help give viewers further reason to stick around beyond the standard analysis, and further enhance the impact of Genesis’ on-screen branding.

Of course, this isn’t going to completely replace standard commercials or commercial breaks, and Genesis will have a significant presence in the rest of the game in both traditional commercials and double-box units. And that may further add to the effectiveness of this approach; they can get their particular message about their vehicles out in those standard spots, but then reinforce it with on-screen graphics and signage at halftime instead of just running the same commercial again.

And halftime’s an interesting spot to do this, as it’s traditionally been a spot where many get up for food, drinks or bathroom breaks. Maybe going to the more musical, less commercial approach can help retain some more viewer eyeballs during halftime, which could help boost ESPN’s ratings for the overall games. We’ll see how it plays out for Genesis and ESPN; this particular deal is only for one year (with Genesis replacing Toyota, which moved over to Thursday Night Football on Fox), but Erhardt (who’s retiring from ESPN early next year, remember) said Genesis has the “first option” to have it again next year. If this works out as the sides envision, this may be the new MNF halftime approach for a while.