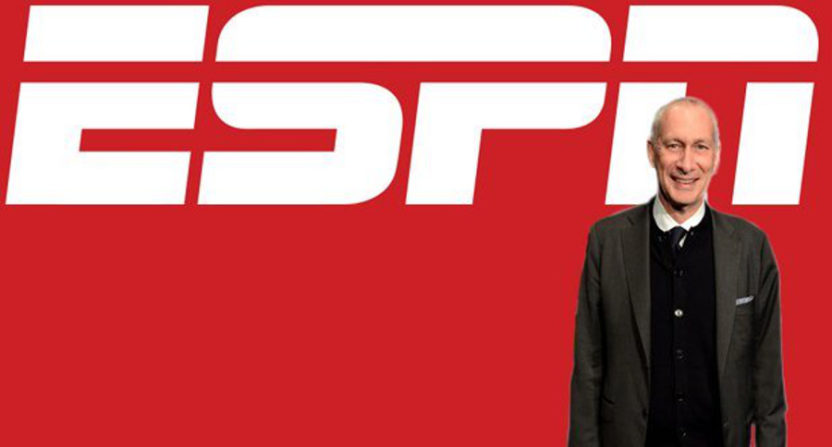 While the last couple of years have seen numerous business challenges and significant controversies for ESPN, with subscriber loss concerns in particular being repeatedly cited as a drain on parent company Disney’s stock, it doesn’t look like there will be any changes at the top any time soon. ESPN president John Skipper’s contract was set to expire after 2018, but Ryan Glasspiegel of The Big Lead reports that it has now been extended through 2021:

John Skipper has agreed to a contract extension with Disney to remain president of ESPN through 2021, The Big Lead has learned from a person with knowledge of the news. Unauthorized to speak publicly on the matter, the person requested anonymity. An ESPN spokesperson declined to comment.

This extension comes with over a year left on Skipper’s contract, which is interesting. He’s been ESPN’s president since 2012 (and has been with the company since 1997). Last time around, he received an extension through 2018 in September 2015, months before his contract was set to expire. This time around, ESPN’s making the move much earlier. That makes some sense considering the major changes ahead for the company, including the launch of their over-the-top ESPN Plus streaming service next year (it’s notable that Disney CEO Bob Iger recently said “We believe creating a direct-to-consumer relationship is vital to the future of our media businesses and it’s our highest priority this year.”), the 2019 launch of the ACC Network, and the reported next round of layoffs and accompanying further shift away from SportsCenter.

If Skipper’s future was uncertain beyond 2018, it wouldn’t necessarily be logical to have him making all those critical long-term decisions, and even if his future was safe internally, there would be external media questions about it. The early extension avoids that talk.

It’s also perhaps notable how this fits with Disney’s larger corporate picture and succession plan, as Iger himself signed an extension through mid-2019 earlier this year after initial plans to step down first in 2016, then in 2018. Extending Skipper means that they won’t need to find a new ESPN president (one of the most important Disney roles at this time) at the same time they’re looking for a new Disney CEO. If Iger does actually leave in mid-2019, that means a new Disney CEO will be established and have some experience under their belt by the time they need to pick an ESPN president.

And they may have some more internal options at that point, too; Justin Connolly (executive vice president, affiliate sales and marketing, Disney and ESPN Media Networks) has already received some buzz as a potential Skipper replacement from the business side, but there’s no obvious pick from the content side at the moment. Recently-promoted content chief (Skipper’s old role) Connor Schell may be a strong candidate by the time 2021 rolls around, though, and others could enter the picture.

Of course, Disney didn’t have to make this decision, and they didn’t have to make it now. With over a year left until Skipper’s contract actually expired, they could have waited to see how some of the high-profile initiatives begun under his watch (specifically, the over-the-top ESPN Plus service and the new Mike Greenberg morning show) did before pulling the trigger on an extension. Waiting also would have let them see how ESPN continued to fare in terms of subscriber loss and how it continued to fare versus FS1; the subscriber loss has slowed recently, and FS1 hasn’t been able to gain much traction at all in studio programming, but both of those things could change before 2018.

And there have been notable problems under Skipper’s tenure, including ongoing subscriber loss and ratings declines and public controversies (especially around Robert Lee, Jemele Hill and social media policies). But this decision indicates Disney believes in Skipper enough that they want him around for the long term even before the returns of the big 2018 projects are known. We’ll see how this pans out for them.

[The Big Lead; photo from The Wrap]