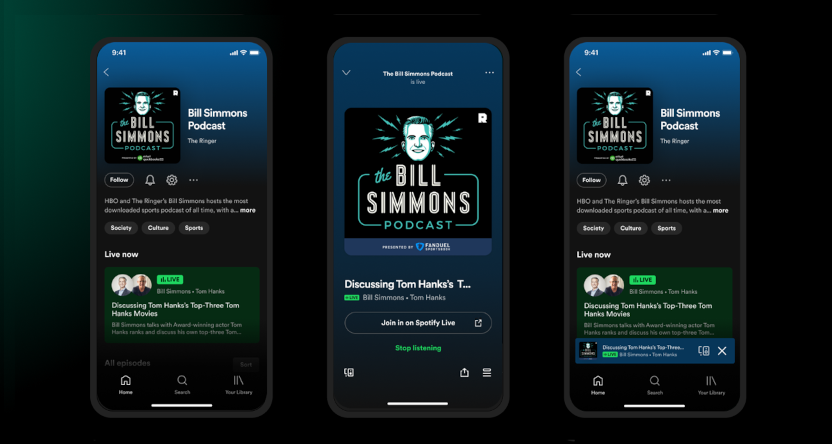 Bill Simmons is taking on a larger former role at Spotify in addition to his work at The Ringer. Back in 2020, Spotify bought The Ringer for $250 million, and Simmons stayed on as managing director of The Ringer; he also revealed at that time that he was working with Spotify leadership on building a global sports strategy. Now, he’s been named Spotify’s head of global sports content in addition to his role with The Ringer. Here’s more on that from J. Clara Chan at The Hollywood Reporter:

Spotify is revamping its internal podcast structure with the creation of new divisions led by Bill Simmons and Max Cutler, the company said on Thursday.

Spotify is also growing its teams responsible for overseeing partnerships with individual audio creators on the platform, such as Dax Shepard and Alex Cooper — both of whom have exclusive deals with Spotify for their shows Armchair Expert and Call Her Daddy, respectively — with the creation of a new “creator content” operation. To oversee that division, Spotify has promoted Cutler, most recently the head of new content initiatives and the managing director of Parcast, to head of talk creator content and partnerships. Cutler will report up to Dawn Ostroff, Spotify’s chief content and advertising business officer.

There’s certainly some logic to this for Spotify. While much of the attention on Simmons comes around what he says on his own shows, a lot of his career has been about what he’s accomplished in different behind-the-scenes roles. That included some early pushes for ESPN to embrace podcasting, his role in creating and defining the 30 for 30 series, and what he’s done with first Grantland and now The Ringer, companies that featured his own content but also a wide range of other writers and podcasters. Simmons has shown an ability to identify talent and an ability to identify what kinds of content many sports fans might be interested in, and both should be assets in this new role. He also remains a well-known and well-connected name, and putting in him a prominent and former role with the larger Spotify company rather than just The Ringer may open some further doors for them in the sports world.

But Simmons is not an uncontroversial figure to name to a role like this. In particular, his June 2020 comments defending the lack of diversity on The Ringer’s top podcasts with “This isn’t Open Mic night” are worth discussing here. Simmons later apologized and vowed to do better, but those aren’t the kind of public comments you want from a media executive, and maybe especially not one charged with overseeing the expansion of a company’s global sports division. For Spotify’s global approach to really work, they’re going to have to target more than just people Simmons easily relates to. (And that wasn’t the only 2020 case of Simmons widely missing the mark on race and diversity, something that also came up in how he and Ryen Russillo initially discussed the George Floyd protests.)

It’s also worth mentioning that Simmons continues to get into some dust-ups with high-profile figures based on his own podcast comments, most recently with his April “F**k Jalen Green” line about why he wouldn’t vote for the Philadelphia 76ers rookie (Simmons is one of the NBA Awards voters) for Rookie of the Year. That’s led to recent pushback from the likes of Green’s teammate, Joel Embiid, who specifically complained about Simmons having an awards vote. The actual opinion here isn’t much of a problem; like anyone, Simmons can absolutely make a case for one player over another. But the particular expression of that opinion drew some blowback, and those kinds of comments could create larger blowback still if they’re coming from Spotify’s head of global sports content rather than just the managing director of The Ringer.

At any rate, Spotify is already doing interesting some things on the sports front. They bought sports-focused audio app Locker Room and parent company Betty Labs last March for around $67 million, eventually rebranding it as Spotify Greenroom and then Spotify Live (the renaming announcement graphic from April featuring Simmons’ podcast is seen above).  And they signed a long-term shirt sponsorship and more deal with Spain’s FC Barcelona in March, with that deal including music performances around Barcelona matches. We’ll see what further initiatives they launch with Simmons in this new globally-focused role.