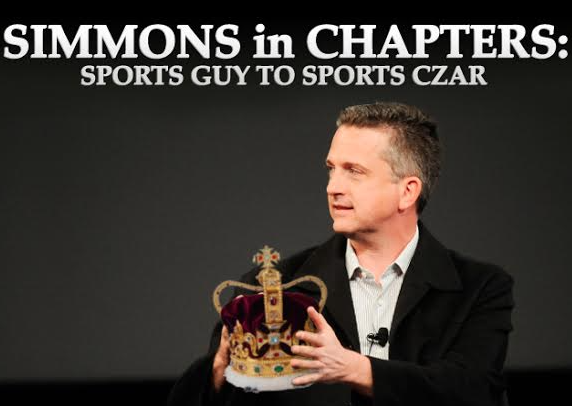 Chapter I: Rise of The Sports Guy

While Bill Simmons was incredibly popular by the start of 2009 as both a columnist and a podcaster, and while his popularity was paying great dividends for ESPN, he was largely seen as off in his own corner. Simmons was viewed as one of Bristol’s biggest web stars, but that didn’t necessarily make him an important player within the company in the grand scheme of things; in fact, there were plenty of others at ESPN, including rival Rick Reilly, who publicly looked down on him. That was about to change.

It’s notable that Simmons’ pre-2009 success was in arenas that were rather new to Bristol, and ones that not everyone inside the company valued. Yes, he was the unquestioned star of Page 2 by that point, but it was only a small part of the company’s overall web presence. Yes, his podcasts were by far the most popular ESPN ones, but that was a qualified success; John Ourand’s June 2009 Sports Business Journal piece on ESPN’s decision to strongly back podcasts started with “It’s not a big business, and it may never be a big moneymaker.” The 2009-2011 years would see Simmons expand that success to new realms, though, becoming even more versatile and even more important to ESPN. One of the most notable? The 30 for 30 series.

Exactly how much credit should Simmons get for  30 for 30? That’s debated in some quarters, but it’s notable that the well-researched section on the series in James Andrew Miller and Tom Shales’ ESPN history Those Guys Have All The Fun gives him a substantial role:

“One of the most ambitious and auspicious original projects in ESPN’s history—second only to SportsCentury—began as a brief memo e-mailed to John Skipper and John Walsh in 2007 from dot-com columnist Bill Simmons. He saw ESPN’s thirtieth anniversary looming and envisioned a massive and promising venture: 30 for 30…”

The authors go on to credit Simmons with much more than just the idea of 30 sports documentaries, including the idea of making these “independent cinematic essays,” focusing on key sports stories that have been forgotten, having the director appear on-camera in each one to discuss the film, and (together with fellow 30 for 30 executive producer Connor Schell) going to well-known filmmakers outside ESPN. Even Skipper’s comments to them about how there’s no “singular paternity” gives Simmons a substantial role, mentioning several of the other key figures (Walsh, John Dahl, Keith Clinkscales, Joan Lynch and Mike Tomlin), but saying “without Bill Simmons, 30 for 30 could not have happened the same way.”

Thus, there’s a pretty strong case that Simmons’ involvement in the initial process at least was rather important. Moreover, some later Simmons interviews (such as this 2011 The Hollywood Reporter one by Lacey Rose) talk about him pitching filmmakers, working on the series, and encouraging ESPN to do a second batch of films, further evidence he was more than just an idea man. Those comments do come from him, and others might emphasize their own role and diminish his, but it sounds like he was involved far beyond the initial memo.

The first 30 for 30 series was a tremendous success on many levels, but it particularly showed that Simmons couldn’t be neatly pencilled into a corner of Bristol. On the face of it, it was a project you’d never expect a columnist or podcaster to come up with, much less play an important role in executing. It’s something he proved very good at, though, and something that wound up boosting ESPN’s overall reputation significantly. Along the way, it increased Simmons’ value to the company and boosted his internal significance.

Of course, there are a few factors to consider here beyond Simmons’ own talent. This only worked because of Skipper’s desire to take on an ambitious project for ESPN’s 30th anniversary, because of HBO’s success in the sports documentary realm irking Skipper, because of Bristol’s resources, because of renowned filmmakers wanting to tell sports stories (and generally doing a very good job with them) and because of the talent of the other key 30 for 30 figures. It’s highly unlikely Simmons could have executed anything close to 30 for 30 on his own. Still, he played a valuable role in the significant success it became.

In some ways, 30 for 30 paved the way for Grantland. It illustrated that Simmons wasn’t just a writer or podcaster, but also someone with an eye for good sports stories, good talent to tell them, and good potential projects for ESPN. Moreover, it gave him some experience on the editorial, content-management side, and it gave him a taste of what it was like to be involved in the production of highly-praised content. All of that likely played a role when he campaigned to start Grantland in 2011. In fact, he directly made the connection in the above-mentioned THR piece:

I had spent three years working on this book, and I was hitting 40, and I was like, “What do I want to do long-term?” I always wanted to create a site that was sports and pop culture. 30 for 30 had a big impact because I loved how that was about finding, empowering and working with these incredible directors, and I thought the same thing could work for writers. I researched different sites and looked through all of my favorite magazines and tried to find people who were on their way up.

What’s perhaps most notable about Grantland’s beginnings is that Simmons included it as essentially a contract demand, as he goes on to say in that piece:

THR: How did you convince ESPN to fund it?

Simmons: Simple — I would have done it with somebody else. My contract still had 10 months to go, and we started talking about it, and I said: “I want to figure this out, and I want to do it here. But once we get to the end of those 10 months, I’m still going to do it.”

That’s gutsy from Simmons, and it shows perhaps the same sort of management-challenging attitude that’s long been a part of his ESPN history and has him in trouble this time. It worked out, though, for both parties. Even if Grantland had failed, ESPN was still able to keep Simmons and benefit from the popularity of his columns and podcasts (plus his 30 for 30 work). Grantland didn’t fail, though, and has grown into a home for solid writing and a pretty nice asset for ESPN, not to mention an idea mimicked in many other places. It’s also helped boost Simmons’ profile, making him a successful editor-in-chief as well as a columnist, podcaster and documentary producer.

30 for 30 and Grantland may have been two of the biggest keys to Simmons becoming much more influential at ESPN than Reilly, and the importance of Simmons winning that battle is something that shouldn’t be understated. It’s not surprising that the two clashed after ESPN’s 2008 move to bring Reilly in; they were the two most prominent columnists on ESPN.com (and ones with rather different approaches), plenty of journalists asked Reilly about Simmons and vice-versa, and even the Worldwide Leader may not have been big enough for both of them.

In the traditional journalism world, you’d expect Reilly to triumph in that fight. He was an experienced and big-name columnist who had just been brought in from Sports Illustrated in a very high-profile (and high-money) move, while Simmons was someone who went from nobody to big figure just inside ESPN, and did so in an unconventional way. Simmons wound up being far more important to Bristol, though, and in a variety of ways; his columns and podcasts continued to draw huge traffic (and often without anywhere near as favourable promotion on the main page as Reilly’s), but Reilly remained just a columnist (and one often reusing material at that), while Simmons was innovating and exploring new realms for the Worldwide Leader to conquer. The fight wound up as a massacre, but with an unexpected winner, as Will Leitch explored in this 2012 Sports On Earth piece on Simmons’ rise and Reilly’s fall:

At first, the story was “will Reilly and Bill Simmons get along?” a question that seemed especially vital considering how many digs Reilly had taken at Simmons in the past. Simmons briefly fought back but eventually got his revenge the old-fashioned way: He demolished Reilly, not just in page views but in television presence and power at the company. Simmons has become one of the signature faces of the network’s NBA coverage — it’s sort of amazing that Bill Simmons, former anti-establishment figure, is going to be the primary pregame and halftime guy on ABC during The NBA Finals — but even started, in Grantland, an influential and well-written sports/culture site that features some of the most talented young writers in the business. (Albeit on a site that desperately tries to pretend it’s not funded by, you know, ESPN.) The idea that Rick Reilly and Bill Simmons could be competing is as aged and over as a good dental joke. That fight is over, and Simmons won in a knockout.

We’ll discuss Simmons’ TV career more in our next installments, but the points Leitch makes in that piece are good and lasting ones.

Simmons unquestionably beat Reilly in the long run (Reilly still does stuff for ESPN on the TV side, but officially retired from column-writing in June), and he did so not just by putting in more effort, outwriting Reilly, and drawing more readers, but also by building a multimedia empire.

In addition to his columns and podcasts, he became a bigger part of ESPN’s overall plans with his involvement in 30 for 30 and Grantland. By the end of 2011, Simmons was by far the biggest face of ESPN in the online realm, and more was yet to come. ESPN.com editor Jay Lovinger says in Those Guys that “Only ‘Bill World’ will ever satisfy Bill.” Heading into 2012, “Bill World” was far more reality than figure of speech.