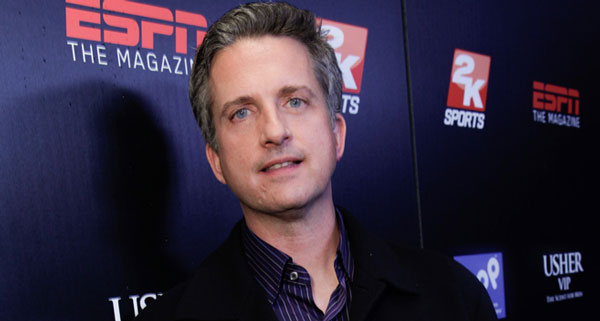 Bill Simmons dared ESPN to suspend him.  The network took the bait.

ESPN announced that they have suspended their most influential personality for three weeks, an unusually lengthy time for on-air talent, over recent comments made on his podcast aimed towards Roger Goodell.

The ESPN statement in full:

“Every employee must be accountable to ESPN and those engaged in our editorial operations must also operate within ESPN’s journalistic standards. We have worked hard to ensure that our recent NFL coverage has met that criteria. Bill Simmons did not meet those obligations in a recent podcast, and as a result we have suspended him for three weeks.”

On a recent podcast, Simmons let loose with a furious rant aimed at NFL commissioner Roger Goodell where he also dared anyone to silence him for calling the commish a liar:

I just think not enough is being made out of the fact that they knew about the tape and they knew what was on it. Goodell, if he didn’t know what was on that tape, he’s a liar. I’m just saying it. He is lying. I think that dude is lying. If you put him up on a lie detector test that guy would fail. For all these people to pretend they didn’t know is such f—— b——-. It really is — it’s such f—— b——-. And for him to go in that press conference and pretend otherwise, I was so insulted. I really was.

I really hope somebody calls me or emails me and says I’m in trouble for anything I say about Roger Goodell. Because if one person says that to me, I’m going public. You leave me alone. The commissioner’s a liar and I get to talk about that on my podcast … Please, call me and say I’m in trouble. I dare you.

The suspension is really quite stunning considering other ESPN personalities have been highly, highly critical of Goodell on Bristol airwaves.  The length is also extraordinary (consider Stephen A. Smith was suspended just one week for his incendiary comments on domestic violence).  Perhaps it was calling Goodell a liar and putting forth daming character accusations.  Perhaps it was the public flaunt of power, daring ESPN to act like a peacock unfurling its feathers.  Perhaps it was a combination of both.

This is Simmons’ third suspension at ESPN.  In 2009 he was given a two week Twitter suspension by the network for comments made towards WEEI.  In 2013, it was a lesser Twitter ban for criticizing First Take.  This is no mere Twitter ban – this is a three week total suspension.  The impact across ESPN’s platforms will be huge from Grantland to the BS Report to promotion for 30 for 30.  Simmons will return from suspension in time for the debut of his Grantland Basketball Show on ESPN in late October.

But will he make it that far?  This high-stakes game of chicken may just be underway. Simmons’ volatility as an employee is no secret and the length of suspension and show of force by ESPN may tip him over the edge.  He promised to take public any rebuke if he got in trouble over his Goodell comments.  Watch this space, because this story ain’t over.